Stunning: in unprecedented move, all 34 bishops from Chile offer resignations to Pope Francis

Every Chilean bishop offered to resign Friday over a sex abuse and cover-up scandal, in the biggest shakeup ever in the Catholic Church’s long-running abuse saga.

The bishops announced at the end of an emergency summit with Pope Francis that all 31 active bishops and three retired ones in Rome had signed a document offering to resign and putting their fate in the hands of the pope. Francis can accept the resignations one by one, reject them or delay a decision.

It marked the first known time in history that an entire national bishops conference had offered to resign en masse over scandal, and laid bare the devastation that the abuse crisis has caused the Catholic Church in Chile and beyond.

Calls had mounted for the resignations after details emerged of the contents of a 2,300-page Vatican report into the Chilean scandal leaked early Friday. Francis had accused the bishops of destroying evidence of sex crimes, pressuring investigators to minimize abuse accusations and showing “grave negligence” in protecting children from pedophile priests.

The Vatican declined to comment on the timing of any decision or on the resignations themselves.

In their statement, the bishops thanked the pope for his “brotherly correction”.

“Above all, we want to ask forgiveness for the pain caused to the victims, to the pope, to the people of God and our country for the serious errors and omissions committed by us,” the contrite statement said.

Some background on what led up to this, via CNS:

After several days of private meetings with Chilean bishops, Pope Francis called on them to build a “prophetic church” that places care for the suffering, especially survivors of sexual abuse, at its center.

In a letter given to the bishops and released by the Vatican May 17, the pope thanked the bishops for accepting his invitation to discuss “the serious acts that have damaged ecclesial communion and weakened the work of the church in Chile in recent years.”

“In light of these painful events regarding abuses — of minors, of power and conscience — we have delved into the seriousness (of the abuses) as well as the tragic consequences they have had, particularly for the victims,” the pope said.

The bishops met at the Vatican May 15-17 to discuss with Pope Francis their handling of clerical sex abuse allegations.

Pope Francis invited three sex abuse survivors — Juan Carlos Cruz, Jose Andres Murillo and James Hamilton — to stay at the Domus Sanctae Marthae, the Vatican residence where he lives, and to meet with him individually April 27-29. They met him again as a group April 30.

The three men have criticized the local church’s handling of abuse cases. They accused Cardinal Francisco Javier Errazuriz Ossa, retired archbishop of Santiago, and his successor, Cardinal Riccardo Ezzati, of covering up the abuse committed by Father Fernando Karadima.

In 2011, Father Karadima was found guilty by a Vatican tribunal and sentenced to a life of prayer and penance.

The pope told the Chilean bishops that he “sincerely asked forgiveness” to the three survivors and acknowledged the bishops’ commitment to “repair the damages caused.” 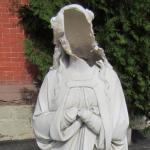 May 18, 2018
UPDATE: Suspect arrested after smashing statue of Virgin Mary, charged with hate crime
Next Post 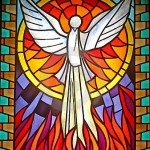 May 19, 2018 What does the royal wedding have to do with Pentecost? Everything.
Browse Our Archives
get the latest from
Catholic
Sign up for our newsletter
POPULAR AT PATHEOS Catholic
1