‘What’s that stick the pope was carrying?’

That seems to be the prevailing sentiment on social media today, reacting to images of Pope Francis at the opening Mass of the synod in Rome. Elizabeth Lev snarked on Twitter:

Seriously? This is neither crosier nor cross. They couldn’t find anything else in the Vatican besides a coat rack? I think there might be a couple old ferula in the Museums if they ran out at Santa Marta. Please bring back beauty.

Here’s a shot below. 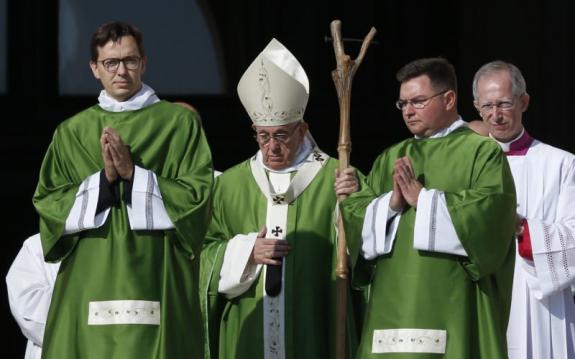 Before we get to the backstory on this staff, some background via Wikipedia:

The papal ferula (from Latin ferula, “rod”) is the pastoral staff used in the Catholic Church by the pope. It is a rod with a knob on top surmounted by a cross. It differs from a crosier, the staff carried by other bishops of Latin-rite churches, which is curved or bent at the top in the style of an shepherd’s crook.

Turns out the ferula was not originally used in papal liturgies, but became a fixture during the Middle Ages:

During the High Middle Ages, the popes once again began using a staff known as a ferula as insignia to signify temporal power and governance, which included “the power to mete out punishment and impose penances.” The actual form of the staffs from this period is not well known, but were likely staffs topped with a knob with single-barred cross on top. The staff was not a liturgical item, and its use was limited to a few extraordinary ceremonial occasions, such as the opening of the Holy Door and the consecration of churches, during which the pope “took hold of the staff to knock on the door three times and to trace the Greek and Latin letters on the floor of the church”. Sometimes, the staff also took the form of a triple-barred cross (or papal cross, a symbol of the papacy), but this was rare in contrast to the single-barred cross. Use of the staff was soon again phased out.

In 1877, the Circolo San Pietro (an organization founded in 1869 to support the papacy) presented a staff or ferula to Pope Pius IX on the occasion of the fiftieth anniversary of his episcopal consecration and is sometimes referred to as the “ferula of Pius IX”. This ferula was used by popes from Pope Pius IX until Pope Paul VI, again only for extraordinary, non-liturgical ceremonies. Pope Leo XIII at times made use of a crosier in the same shape as that of other bishops. In addition, a triple-barred cross ferula was made for Leo XIII for the Golden Jubilee of his Priesthood in 1888. Pope John XXIII had begun using the 1877 ferula of Pius IX for various liturgical celebrations during the Second Vatican Council. It was during the pontificate of Paul VI that the popes more permanently began using a ferula as a pastoral staff for solemn liturgical celebrations, rather than a symbol of governance. In effect, the papal ferula became the equivalent of a bishop’s crosier or pastoral staff.

The pastoral staff carried by the popes since Pope Paul VI is a contemporary single-barred crucifix, designed by the Italian artist Lello Scorzelli in 1963 and carried and used in the same manner as a bishop uses his crosier.  Paul VI had actually used three other ferulas, similar in style, with the other versions having a cross bar which was straight, or bent upward. Scorzelli’s well known version has the cross bar bent downward, much like the paterissa carried by a bishop within the Eastern Catholic Churches. Paul VI first used this staff on 8 December 1965, at the closing of the Second Vatican Council. The Scorzelli staff was the one retained by his successors starting with Pope John Paul I. This ferula design is often associated with Pope John Paul II.

The ferula has no fixed design and varies in looks and style. Some are a crucifix, showing the Body of Christ; others are plain crosses. There is no set standard. 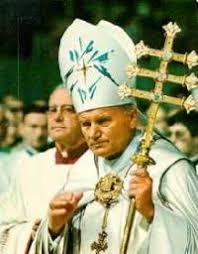 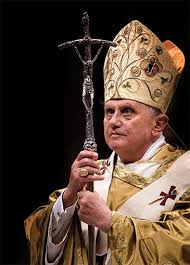 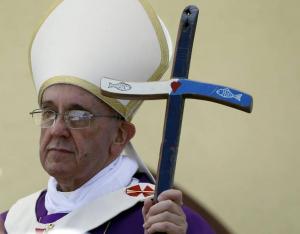 As for this particular cross, CNS says it was a gift to Pope Francis from a group of young people, who asked him to use it during the synod. He obviously complied. It appears to have a nail piercing the wood. (Photo below by Paul Haring). 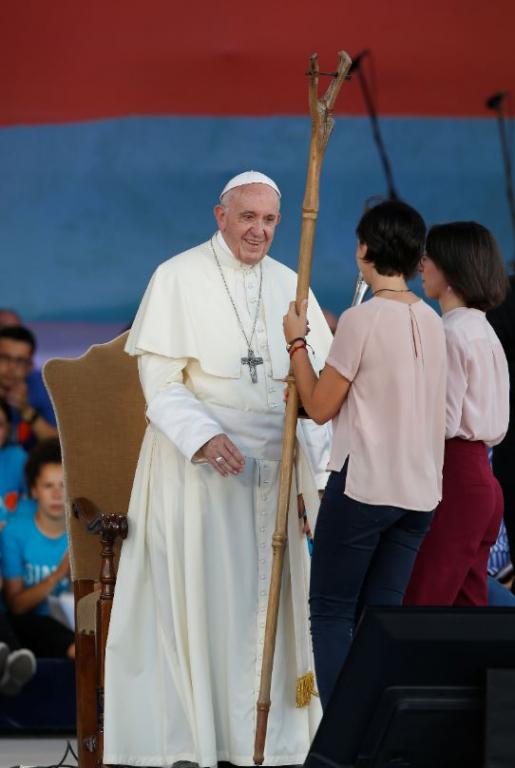 A few people have mentioned that it looks nothing at all like a cross—or, at least, our traditional idea of what the instrument of crucifixion should look like.

But throughout history there have been depictions of the cross that show something radically different—such as this crucifix in Reina, Spain, said to date from the 14th century. 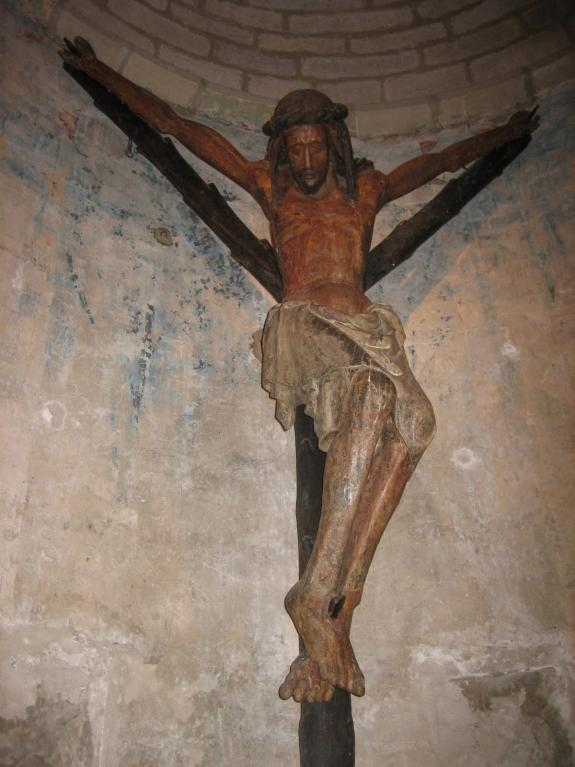 Then there’s this version from Africa. 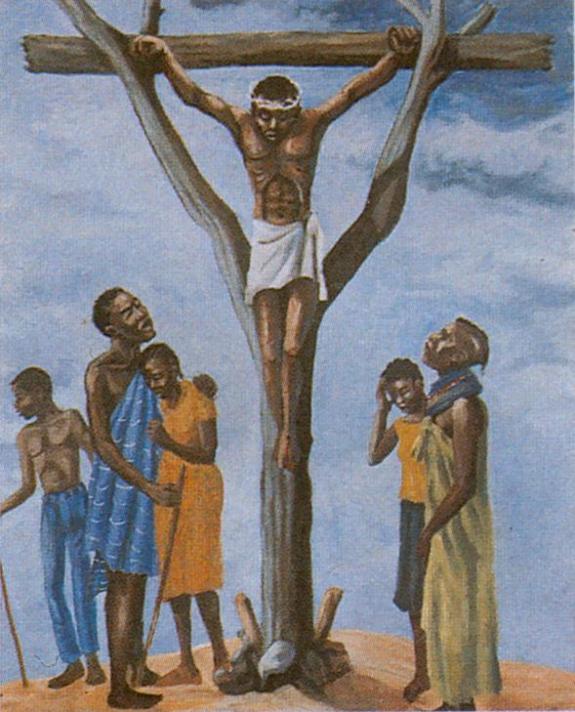 Finally, there is this, known as the The Furka Cross: “[This cross] is referred to as the thieves or robbers cross as it is believed that in Roman controlled Judea criminals were crucified on a forked cross, but such crosses would be costly to build so it is unlikely it was actually used. The three arms of this cross remind us of the Holy Trinity and the attributes of God: omniscience, omnipotence, and omnipresence.” 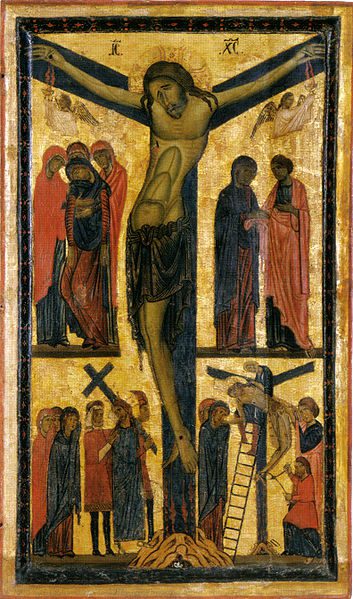 Different cultures have different ways of showing and illustrating the cross that brought about our salvation. Perhaps what matters more than what we see when we gaze upon the cross is how we respond when we reflect on what it means to us today — and what the wood of the cross purchased for us, despite our own imperfect, broken, unworthy state.

UPDATE: Catholic News Agency has even more about this particular farula. From the Spanish language edition:

The Holy Father received this staff as a gift from the 70,000 young Italians with whom he met at the Circus Massimo in Rome on August 11 .

The young people, from some 200 dioceses in the country, participated in the great pilgrimage organized by the Italian Episcopal Conference with the motto “On a thousand roads, towards Rome”.All walked on the various routes that took them from their cities of origin to the Plaza de San Pedro in the Vatican.

The delivery of the staff was made a few moments after the event began. A young woman of 30 years, identified as Elena, told the Pontiff that during the pilgrimage “we have experienced that each path needs his cane and on this special occasion we give him a staff sculpted from a log.”

“In the torn heart of Jesus on the cross is guarded a small seed, that seed that dies to bear fruit and our hope. And it reveals the secret to make life flourish, love,” said the young woman explaining the meaning of the staff. She also told Pope Francis that “it would be beautiful for this staff to accompany him during the Youth Synod. All of us gathered here could feel that we are at their side and connect our heart and our memory to this extraordinary meeting. ”

“Holy Father, we have come here to tell you that we love you very much and we want to walk forward together,” she added. 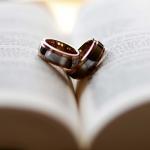 October 3, 2018
'It can be more tricky to find a suitable married man to ordain than a suitable celibate man'
Next Post 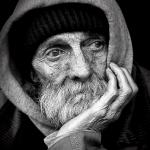 October 4, 2018 Quote of the Day: A blessed reminder from St. Francis of Assisi
Browse Our Archives
Related posts from The Deacon's Bench