“We received a gift so that we might become a gift. Gifts are not bought, traded or sold; they are received and given away.”

At the opening Mass for the Amazon synod Sunday, Pope Francis prayed that the Holy Spirit would give the bishops prudence, wisdom, and discernment to help the Church in the Pan-Amazonian region be renewed by the fire of faith.

“Prudence is not indecision; it is not a defensive attitude,” he said in St. Peter’s Basilica Oct. 6. “It is the virtue of the pastor who, in order to serve with wisdom, is able to discern, to be receptive to the newness of the Spirit.”

“Fidelity to the newness of the Spirit is a grace that we must ask for in prayer. May the Spirit, who makes all things new, give us his own daring prudence; may he inspire our Synod to renew the paths of the Church in Amazonia, so that the fire of mission will continue to burn.”

The Synod of Bishops on the Pan-Amazonian region is taking place at the Vatican Oct. 6-27. Bishops, priests, lay experts, and religious men and women, will meet to discuss issues of importance to the Church in the Amazon, including a lack of priestly vocations, ecological challenges, and obstacles to evangelization.

Present at the Mass Oct. 6 were the synod fathers and the 13 cardinals created in a consistory Oct. 5.

In his homily, Pope Francis pointed to the Old Testament episode of the burning bush to show that “God’s fire burns, yet does not consume.”

“It is the fire of love that illumines, warms and gives life, not a fire that blazes up and devours. When peoples and cultures are devoured without love and without respect, it is not God’s fire but that of the world,” he said, condemning the times people have colonized others instead of evangelizing them.

“May God preserve us from the greed of new forms of colonialism,” he continued. “The fire set by interests that destroy, like the fire that recently devastated Amazonia, is not the fire of the Gospel. The fire of God is warmth that attracts and gathers into unity.”

Hands were laid on our heads so that we in turn might be hands raised to intercede before the Father, helping hands extended to our brothers and sisters. We received a gift so that we might become a gift. Gifts are not bought, traded or sold; they are received and given away. If we hold on to them, if we make ourselves the centre and not the gift we have received, we become bureaucrats, not shepherds. We turn the gift into a job and its gratuitousness vanishes. We end up serving ourselves and using the Church.

Thanks to the gift we have received, our lives are directed to service. When the Gospel speaks of “useless servants” (Lk 17:10), it reminds us of this. The expression can also mean “unprofitable servants”. In other words, we do not serve for the sake of personal profit or gain, but because we received freely and want to give freely in return (cf. Mt 10:8). Our joy will be entirely in serving, since we were first served by God, who became the servant of us all. Dear brothers, let us feel called here for service; let us put God’s gift at the centre.

To be faithful to our calling, our mission, Saint Paul reminds us that our gift has to be rekindled. The verb he uses in the original text is fascinating: to rekindle, literally, which means stoking a fire (anazopyrein). The gift we have received is a fire, a burning love for God and for our brothers and sisters. A fire does not burn by itself; it has to be fed or else it dies; it turns into ashes. If everything continues as it was, if we spend our days content that “this is the way things have always been done”, then the gift vanishes, smothered by the ashes of fear and concern for defending the status quo. Yet “in no way can the Church restrict her pastoral work to the ‘ordinary maintenance’ of those who already know the Gospel of Christ. Missionary outreach is a clear sign of the maturity of an ecclesial community” (BENEDICT XVI, Apostolic Exhortation Verbum Domini, 95). For the Church is always on the move, always going out and never withdrawn into itself. Jesus did not come to bring a gentle evening breeze, but to light a fire on the earth.

Dear brothers and sisters, together let us look to the crucified Jesus, to his heart pierced for our salvation. Let us begin there, the source of the gift that has given us birth. From that heart, the Spirit who renews has been poured forth (cf. Jn 19:30). Let each and every one of us, then, feel called to give life. So many of our brothers and sisters in Amazonia are bearing heavy crosses and awaiting the liberating consolation of the Gospel, the Church’s caress of love. So many of our brothers and sisters in Amazonia have given their lives. I would like to repeat here the words of our beloved Cardinal Hummes: when he arrives in those little towns of Amazonia, he goes to the cemetery to visit the tombs of missionaries. It is a gesture on the Church’s behalf for those who gave their lives in Amazonia. And then, with a little shrewdness, he says to the Pope: “May they not be forgotten. They deserved to be canonized”. For them and for all those who have given their lives and those who are still giving their lives, and with them, let us journey together. 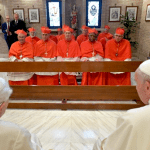 October 5, 2019
Do the red thing: Francis and Benedict send a message of loyalty to new cardinals
Next Post 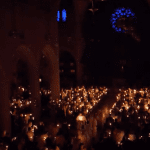 October 6, 2019 'Serve one another': my parish's stewardship video
Browse Our Archives
get the latest from
Catholic
Sign up for our newsletter
POPULAR AT PATHEOS Catholic
1