Kirk Cameron became a household name during his run on the show Growing Pains. However, he has remained in the spotlight for his faith as much as his acting in the years since. Now he is making headlines again with a new children’s book titled As You Grow.

The book “teaches the biblical truths of the Fruit of the Spirit” as you “follow Sky Tree’s journey from a small acorn to a mighty tree that provides shade, sustenance, and lodging.”

As many authors do, Cameron and Brave Books—the story’s publisher—were hoping to increase interest by engaging with local libraries and their story-hour programs. So far, more than fifty of those asked said no.

It’s important to note, however, that Cameron and Brave Books have been fairly selective in the libraries to whom they’ve reached out. All of these libraries have made news for hosting drag queen story hours, “name change” clinics, and/or promoting gender fluidity. As such, it should not come as a surprise that they decided not to promote the book.

For example, Rochambeau Public Library in Providence, RI replied that “We are a very queer-friendly library. Our messaging does not align . . . You can fill out the form to reserve space, to run the program in our space—but we won’t run your program.” A library in San Diego that promotes “telling our stories” and highlights themes of diversity, love, acceptance, and inclusion told Cameron’s publisher that “because of how diverse our community is, I don’t know how many people you would get.”

Many of the other libraries have claimed a similar rationale for their decision to decline.

Cameron said of the repeated rejections, “This is proof that more than ever, we are getting destroyed in the battle for the hearts and minds of our children,” adding that “publicly funded libraries are green-lighting ‘gender marker and name change clinics’ while denying a story time that would involve the reading of a book that teaches biblical wisdom. How much more clear can it get?”

Judging by the response Cameron’s comments, and the situation in general, have received from conservative sources, it’s clear that many people agree with him.

But is the situation really that simple?

The outcome for which they hoped?

To their credit, Cameron and Brave Books are not calling for people to boycott these libraries or harass those who have chosen not to allow him to read As You Grow in their building. Rather, they’ve chosen to donate a book to a local library for each one purchased and have encouraged believers to reach out to their libraries and ask that the book be included among their offerings.

Moreover, there is justification for their frustration given that the vast majority of public libraries receive most of their funding from local governments (i.e., taxes). As such, people should be entitled to have a say in what kinds of events take place in the libraries for which they are helping to pay.

But while Cameron’s response has been largely in line with a Christian character, it should not be overlooked that he and his publisher are likely getting exactly the outcome for which they hoped.

As Brave Books stated, “All of the libraries that we have contacted have hosted LGBTQ+ story times with drag queens in the past.” The odds of those same libraries opening their doors to allow a very public Christian to come read a book inspired by biblical truth were pretty low, and they had to know that.

Plenty of libraries around the country would welcome Cameron with open arms, but he and his publishers have chosen to target those that will not.

Did they do so because they felt like those areas were the ones most in need of God’s truth? It’s possible.

Did they do so because they knew it would drum up interest in the book when word of their repeated rejections leaked out? That possibility seems undeniable.

So how should we view this story?

It would be naïve to think that there are not more libraries like those that have turned down Cameron’s request to host a story hour for the new book. After all, there is some truth to the idea that, as the CEO of Brave Books put it, “publicly funded libraries have now become indoctrination centers that refuse to allow biblical wisdom to be taught to our children.”

However, it would also be naïve to think that such libraries represent anything but a very vocal minority in our culture.

Discouragement would be the wrong response to this story, and anger would be as well. Though both emotions are understandable, neither is helpful.

There have already been far too many comments calling for lawsuits, CPS investigations, and protests. Such a response would only give more ammunition to those who already expect to face hate from those who disagree with their beliefs.

At the same time, it would also be a mistake to sit back and allow our society to progress further down this path unchecked.

So how should we respond?

How should Christians respond when wronged?

In Matthew 5:38–42, Jesus gives a series of instructions that largely fall under the banner of turning the other cheek. At no point in this teaching does he deny that Christians have the right to resist or retaliate when wronged. He just calls us to choose not to do so.

The fact that we retain our right to do otherwise is what will make it stand out so much more when we choose not to get pulled into the cycle of retaliation.

It should come as no surprise that, for many Christians, their first response was to look for some way to retaliate against these libraries. In fact, that appears to have been what Brave Books was counting on when they sent those requests.

But just because these places wouldn’t let Cameron read his book doesn’t mean that you or I can’t. Moreover, if we are dependent upon Christian celebrities, story hours, or anyone else to guide the moral trajectory of our children, then we have much bigger problems than what’s being read at our local library.

So be aware of what’s going on and, if the Lord leads, reach out to your local library to graciously make your voice heard on these subjects. But choose not to retaliate or react in a way that will ultimately prove counterproductive to the larger mission of God.

Cameron’s book is intended to help kids understand the Fruit of the Spirit.

Let’s make sure our lives do the same. 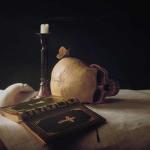