Jesus, Israel, and the Land

Did God promise the physical land of Israel to the physical descendants of Abraham; i.e., Israel? One way to answer this question is to say, absolutely. But, then I would contend that we must ask: but, “who is Israel”? To which I believe that the theological answer is “Jesus!”[1]

But isn’t this just playing games with the Scriptures? After all, some will contend, the Bible is clear. The OT promises the physical, territorial land to the physical descendants of Abraham.

Those who hold this view often claim that anything other than a literal fulfillment of these promises would mean that God would be unfaithful to His word.

Allow me to make two points:

1) Jesus as the Temple

Instead of debating over the land promises, let’s begin this discussion by looking the promises regarding the temple and their fulfillment in Jesus (I have written far more extensively on this in both: These Brothers of Mine and to a lesser extent in Understanding the New Testament and the End Times). 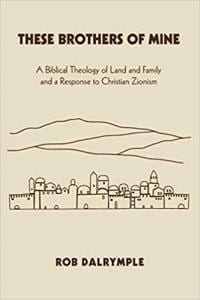 When it comes to the OT promises of the temple does it not appear from the OT prophets that the future fulfillment of the temple will be some physical temple building? Yet, does not Jesus clearly indicate that He is the temple of God (John 2:19-21)?

In other words, we have every expectation from the OT that the fulfillment of the temple is going to be some physical building, and, yet, Jesus comes along and says it was all along pointing to Him.

This is why the Gospel of John says, “We saw His glory” (John 1:14). It was because Jesus was the living glory of God in the flesh! He was the glorious presence of God “tabernacling” (John 1:14) among them.

Could it not be, then, that in the same manner, the promises regarding the land were also fulfilled in Jesus?

2) What is the purpose of God’s gift of Land?

What is often missing from this discussion is a failure to recognize the nature or purpose of the land. That is, why did God give the land to Abraham and his descendants?

It is my argument that the land represents the place in which God was to dwell among His people. Abraham and his descendants were to be the people (family) among whom he was to dwell. Where God actually dwelt was the temple.

If we were to step back for a moment to the beginning, we would realize that God’s desire was to dwell among all people and throughout the entirety of His creation. The whole earth was to be a cosmic temple (a blog will not allow me to elaborate on this thesis here, but suffice it to say that the creation narrative suggests that God created the world as a cosmic temple. As Isaiah notes, “Heaven is my throne and the earth is my footstool” (Isa 66:1)).

Once sin entered into the equation and humanity was expelled from God’s garden presence the question of the biblical narrative became: “how is God’s presence going to be restored to His creation?”

The answer begins with God’s call to Abraham. Abraham and his descendants will be the people (family) among whom God will dwell. Eventually, God would have Moses build a tabernacle and later Solomon built a temple where God would dwell among his people.

But we must remember that God’s desire was to dwell among all people (family) and to inhabit the entire earth (land). And it is these that God promised to bless Abraham with if he obeyed the covenant: namely, family[2] and land.[3]

Limitations of Temple, Land, and Family in the OT narrative

The problem is that a physical temple building has an inherent inability to fulfill the nature and purpose of the Temple. This is because such a building restricted the presence of God to one place and to one person.

This same limitation existed with regard to the nature of both the people of God and the land. For, as long as the people of God were limited to one race the presence of God would be restricted to one people. As a result, God’s intent to bless all the nations would never come to fruition.

In the same way, as long as the land of promise was tied to the physical boundaries of the land, then God’s presence would never fill the earth. As a result, God’s desire to bless the whole earth would never be accomplished.

When we turn to the NT, we see that the fulfillment of God’s desires has come in Jesus. Jesus is the true people of God (family) and the source of sustenance (land). Consequently, Jesus commands his disciples to go “even to the remotest part of the earth” (Acts 1:8)—land—and “make disciples” (Matt 28:19) of “all the nations” (Luke 24:47)—family. He promises them, “I am with you always” (Matt 28:20); that is, He is the true Temple!

As a result of the coming of Jesus, God’s presence is now extending through Jesus to the nations and throughout the earth! The fulfillment has come!

When Jesus comes, He does not “redefine” anything. He simply comes and explains what the true meaning all along was!

In other words, When Jesus says that He is the temple of God, He was saying that the restoration of God’s garden presence was found in Him. This is what God has intended all along! Jesus is the presence of God among us!

This is why He uses the language, “I am the vine” (John 15:1f). This is the language of the land. The land is now where Jesus is.

Jesus will also go on to define family as through Him as well: “Looking about at those who were sitting around Him, He said, ‘Behold My mother and My brothers! For whoever does the will of God, he is My brother and sister and mother’” (Mark 3:34-35).

We can call this a “redefinition” if we’d like. But it is the proper definition. Jesus didn’t come into the first-century world and redefine things. He came in said, you have all gone astray because you have missed what the Scriptures have been saying all along! It was about Me! When He said this, He was not merely talking about His death and resurrection. He was talking about everything! The feasts. The temple. The land. The family of God. The Torah. The two Great Commandments.[6]

Now, in my book (These Brothers of Mine), I go on to argue that the “fulfillment” continues, through the Spirit, into the NT people of God and ultimately finds its fulfillment in the New Jerusalem. But I can’t fit all of that into a blog and I need to sell books anyways! Which you can purchase here.

Is this “spiritualizing” things? No!

Some might argue that I have taken “literal” promises of Scripture and “spiritualized” them. To which I would say “no”! Emphatically, “no!”[7] How so?

In other words, if the OT story was merely about an “everlasting” promise of God to Abraham and his descendants: namely, that God would bless them and give them an abundant land and an abundant family, then we would have to stop and say, “no question here, this land belongs by divine caveat to the Jewish people”—assuming the Bible is the divine word of God.

When we note that the biblical story begins in Eden. And that God’s intent was to dwell among all people and throughout the entirety of the world: “be fruitful and multiply and fill the earth” (Gen 1:28); which was given before Adam and Eve sinned.

And when we see that the New Creation (i.e., the New Jerusalem of Rev 21-22) ends with “no temple” (Rev 21:22), because the “Lord God the Almighty and the Lamb are its temple” (Rev 21:22), and that it fills the earth, then we realize that maybe there is something more to this promise to Abraham and his descendants than just some simple promise about them having land and an abundant family.

The biblical story is pointing us to God’s restoration of the garden temple. That restoration began in Jesus.

“Then beginning with Moses and with all the prophets, He explained to them the things concerning Himself in all the Scriptures” (Luke 24:27).

[1] I address this fully in my book These Brothers of Mine: A Biblical Theology of Land and Family and a Response to Christian Zionism.

[4] Again, see my book These Brothers of Mine for a more complete discussion. If you haven’t bought it already you should be asking yourself, “why not?” buy it now!

[7] It is quite ironic that dispensationalists are the ones who are guilty of “spiritualizing” the text, but again this is a blog and not a book.

July 22, 2020 Pursue truth at all times, then follow it (part 3)
Browse Our Archives
get the latest from
Determinetruth
Sign up for our newsletter
POPULAR AT PATHEOS Evangelical
1

What Rejecting God Did to Higher...
Cranach
Related posts from Determinetruth