The Artiste and the Soldier Should Be Friends

The Artiste and the Soldier Should Be Friends January 2, 2012 Max Lindenman 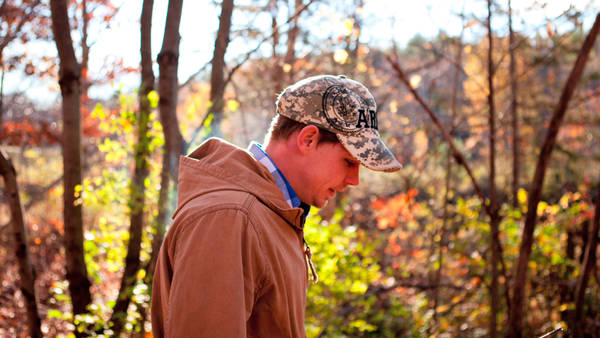 Among the regulars on the right-wing discussion board where I provided some of the loyal opposition, no group was held in greater contempt than college students studying the fine arts. They were godless, self-indulgent, pampered parasites. The men wore women’s underwear; the women, who wore none, had boyfriends and parents arrested on false rape charges. Everyone celebrated Kwaanza. If a high-school education sufficed to make an artist out of Don Knotts, the conventional wisdom held, it should suffice for everyone.

Be all that as it may, today’s New York Times carries a story about an NYU film student who did a undisputably good deed for an Iraq War veteran, and perhaps for veterans in general. Since losing his leg to a roadside bomb in 2006, former U.S. Army sergeant Matthew Pennington had been experiencing some of the symptoms of Post-Traumatic Stress Disorder, including spells of hypervigilance, depression and rage. Dissatisfied with the medication prescribed by the VA doctors, he turned to booze. It was “in an alcohol-fueled fit of despair,” reports the Times, that Pennington “drove his car into a brick wall, emerging so dazed that he thought he was back in Iraq.”

Just as Pennington was bottoming out, it so happened that an NYU director-in-training named Nicholas Brennan was coming to the “stinging realization” that he “couldn’t honestly count a single member of the U.S. military as a close friend.” Brennan reached out, befriending vets in bars and hospitals. Once he’d won their confidence, Brennan began picking their brains. It was the stories of the challenges they faced in re-entering civilian life, most of all, that intrigued, moved and finally inspired him. He decided to re-tell these stories “in a way that would hopefully enable civilians like myself to learn more about the lives of young veterans while also inspiring those veterans with a story that was ultimately about hope.”

Toward the realization of this new goal, Brennan dedicated his senior project, a 15-minute film on a former Marine celebrating his first “Alive Day,” or anniversary of his wounding. He e-mailed a general casting call, which reached Pennington through a friend. Recognizing his own life in the story as Brennan outlined it, Pennington wrote back describing his injuries, adding that they’d “resulted in a personality change for the far worse.” Not only did performing for Brennan bring Pennington out of his shell, as he’d hoped it would, it helped him confront certain unpleasant facts:

In the final scene of the 15-minute film, titled “A Marine’s Guide to Fishing,” Connor sits on a pier at sunset, his prosthetic by his side, decompressing after a violent flashback in front of his co-workers. His boss, a Vietnam veteran, counsels him to take his time, but leaves with a gentle warning: “You stay out here too long, you’ll never get back.”

A Marine’s Guide to Fishing has a website of its own, where visitors can order DVDs. Judging by the two-minute trailer, it’s a good’un. Brennan chose his location well: a New England fishing village, where the light is gentle. For a rookie, Pennington gives a good performance. He’s a natural scowler — no mean accomplishment — and his eyes wear that indescribable look unique to combat veterans. No actor could put it on without having seen the elephant up close; more than anything, it makes his character instantly credible.

So far, the making of the film seems to have enriched everyone involved. Brennan, whose press kit lists him as a graduate, walked off with the GI Film Festival’s Best Picture Award. Pennington, who recently renewed his marriage vows, now reads textbooks on acting and is considering joining a local theater group. (One suspects he’s already got better chops than Audie Murphy ever had.) Just goes to show you that the pussy liberal artiste and the rugged military type — like the farmer and the cowman — should be friends.

Turns out bridges are already under construction! The soldierly and artistic Delta Bravo Sierra has linked me to his site!

January 2, 2012
Tintin and the Mystical Body of Christ
Next Post

January 5, 2012 Advice to Santorum: Remember the Catacombs!
Recent Comments
0 | Leave a Comment
Browse Our Archives
get the latest from
Catholic
Sign up for our newsletter
POPULAR AT PATHEOS Catholic
1

Facing this Election, We Must Recall...
suspended in her jar
Related posts from Diary of a Wimpy Catholic

Catholic
Remembrance of Sins Past: Book 341
Diary of a Wimpy Catholic

Catholic
A Maverick Marian Moment
Diary of a Wimpy Catholic