Last month, Elizabeth Scalia, my managing editor, proposed a moratorium on “liberal,” “conservative,” and suchlike labels in discussions of intra-Church divisions. I’ve been a good boy ever since, but Philadelphia’s Archbishop Chaput doesn’t seem to have gotten the memo. In an interview with National Catholic Reporter’s John Allen, Jr., he remarked that people on “the right wing of the church…generally have not been really happy” about Francis’ election.

It’s true that Francis has his critics. But there’s also been a push to stress the continuity between Francis’ pontificate and those of his two predecessors. In First Things, William Doino goes about it very soberly. Some of my friends, however, when making the same case in less formal venues, succumb to a kind of desperation. “Move along, folks! Nothing to see here! Francis and Benedict are like two papal peas in a pod! Forget what the lamestream media says — if Francis joined a spin class, you wouldn’t be able to tell him from Pius XII!”

Each side holds a share of the truth. Yes, Francis is a champion of Catholic orthodoxy. No, he’s not trying to upend any of his Benedict’s work, much less upstage the man himself. But if we’re willing to use the term “liberal” to mean something besides “in tune with the post-Woodstock West,” it applies quite well to certain qualities Francis appears to possess in special abundance, or at least certain qualities he sees fit to put forward like a best foot.

Psychologist Jonathan Haidt makes the case that “liberal” and “conservative,” “left” and “right,” refer to something more profound and less changeable than party preference. They reflect divergent moral foundations, or intuitive, sub-rational assumptions on what constitutes right and wrong. By analyzing data obtained through questionnaires completed at www.YourMorals.com, Haidt, along with University of Virginia colleague Ravi Iyer, concluded that respondents who self-identified as “liberal” or “moderate” were especially likely to base their morality on a foundation of “care” and “fairness,” but less likely to value “loyalty,” “authority,” or “purity.” Self-described conservatives tended to value all of these more or less equally.

It’s pretty plain that Francis has so far given priority to an ethic of care, or “sensitivity to the suffering and needs of others,” even when other values might urge a different course of action. He likes to tell the story about an elderly woman who cornered a young priest after Mass and asked for a blessing. With the best of intentions, the priest tried to catechize the lady, explaining that he’d already blessed the congregation during the Mass. Underwhelmed by his reasoning, the woman thanked him, then asked a blessing from another priest. To Francis, this story demonstrates that the woman’s real need was not a lesson in theology, but “to be touched by the Lord,” and he sees no problem in catering to it.

As for in-group loyalty, which “rewards team players and ostracizes those who betray the group,” Francis has tended to ignore it or even dismiss it outright. On Holy Thursday, he washed the feet of a Serbian Muslim woman. More recently, he’s celebrated Mass at Lampedusa to call attention to the hardships faced by Africans — many of them Muslims — who migrate to Europe, often over the objections of native Europeans. A line from the encyclical Lumen Fidei generally attributed to Francis maintains that “Anyone who sets on the path of doing good is already drawing near to God,” and Francis has stressed that this “anyone” includes atheists.

Haidt defines “purity” as “a revulsion toward objects that make us sick.” In some contexts, he substitutes the word “sanctity,” which also involves “an appreciation for the sacred.” Where the Church is concerned, the second value would appear to be more germane; but it’s the first that Francis has soft-pedaled. Michael Sean Winters observes that he “does not focus on the sins of men” but “on the mercies of God.” All the feet Francis washed on Holy Thursday belonged to inmates in a juvenile prison. One Rorate Caeli reader posted that he could only have countenanced the participation of these hoodlums if they’d been clapped in irons at the time. By his standard of delicacy, Francis may as well have been a chronic nose-picker.

But it may be at the hurdle of “authority,” or “sensitivity to signs of rank or status, and to when someone is not behaving according to his status,” that Francis really stumbles. He’s set out to reform the Curia not in the manner of a man on horseback, but in consultation with eight cardinals. He prefers the title Bishop of Rome to Supreme Pontiff. When Chaput warned Allen, “There has to be some distance between the general crowds and the Holy Father,” he was expressing concern for Francis’ physical safety. But I wonder whether he was also making a broader point: that close encounters with the mob compromise the dignity of his office. When Katrina Fernandez complained that Francis “acts like he doesn’t want to be pope,” she accused him of committing lèse-majesté against himself.

As many have pointed out, not all of this “liberal” behavior is unique to Francis. Pope Benedict once hosted a Christmas luncheon for homeless people, an act that seemed to favor care over purity. But in Haidt’s model for moral reasoning, intuition precedes and can even dominate reason, and according to the intuitive judgment of many, Francis is consciously tweaking the tone of the papacy. On the whole, at least for the time being, the new tone is finding a wildly enthusiastic, even ecstatic response. Chaput’s disgruntled right-wingers in time may come around themselves. As the archbishop observes, “[Francis] will have to care for them, too.” Poor babies, of course Francis will care for them. That’s what liberals are for.

Note: Probably because of some glitch on my own virus-infected computer, I am finding myself unable to post links. For a detailed review of Haidt’s research, findings and conclusions, see his book The Righteous Mind: Why Good People Are Divided By Politics and Religion. Doino’s debunking of “Five Myths About Pope Francis” is available on First Things’ website, at www.firstthings.com, as an On the Square feature. It is dated July 22. Allen’s interview with Archbishop Chaput, along with Michael Sean Winters’ commentary, appears on National Catholic Reporter’s webpage, www.ncronline.org. Both are dated July 24. 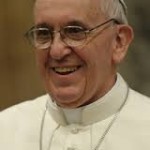 July 30, 2013 The Day the Pope Said 'Gay'
Recent Comments
0 | Leave a Comment
"Saint Joseph of Cupertino.'Nuff said."
John Stevens My Real Career: Fool in Christ?
"He did too much at one time and for the first time. Although you are ..."
Sherry de Bosque The Devil I Know
"Learn more. This was about facing the immortal soul and it's relationship with good and ..."
Sherry de Bosque The Devil I Know
"It took me a minute. But I understand, exactly. I lived in Honduras during that ..."
Sherry de Bosque A Palm for Romero, A Finger ..."
Browse Our Archives
get the latest from
Catholic
Sign up for our newsletter
POPULAR AT PATHEOS Catholic
1

Avoid Universalizing Private Devotions And Cultural...
A Little Bit of Nothing
Related posts from Diary of a Wimpy Catholic

Catholic
For Veterans' Day: Reflections on the Field-Hospital Church
Diary of a Wimpy Catholic

Catholic
"Radical Loneliness" and the Parable of the Frozen...
Diary of a Wimpy Catholic
TRENDING AT PATHEOS Catholic