The Day the Pope Said ‘Gay’ 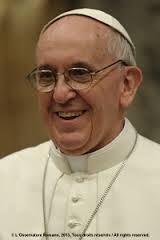 Fielding questions from the press on his way home from World Youth Day, Pope Francis skirted the issue of whether or not a “gay lobby” exists in the Vatican. His expression of support for Institutional Works of Religion prelate Monsignor Battista Ricca, who stands accused of carrying on affairs with men while representing the Vatican in Uruguay, was vague and tentative.

But the pope did use the word “gay,” several times. He was speaking Italian, where, as in English, the word has neutral-to-positive connotations. Though it was introduced by the journalists who were grilling him, Francis seems to have adopted it readily and uttered it without adding invisible scare quotes. In that simple linguistic concession, he demonstrated, once again, his willingness to engage with the world on its own terms.

It would be fair to say that the Vatican framed its statements on the subject of homosexuality in a spirit of pushback, with the gay rights movement doing the pushing. For that reason, official communication from Rome has tended to take a hunkered-down, defensive tone. In a 1986 letter, the Congregation for the Doctrine of the Faith warned that in the decade since it had last addressed the matter,”an overly benign interpretation was given to the homosexual condition itself, some going so far as to call it neutral, or even good.” Attacking that interpretation meant rejecting the jargon of the party promoting it. In Church usage, there could be no gays, only “homosexual persons”.

This convention seems to have been observed pretty scrupulously. Despite its encouraging tone, “Always Our Children”, a letter from the USCCB’s Committee on Marriage and Family to the parents of LGBT children, conforms to it. Even while extending LGBT would-be communicants a qualified welcome with the jaunty exhortation “wash your hands,” Cardinal Dolan waxes clinical when referring to “the condition of homosexuality” and “same-sex attraction.” When it comes to the letter of Church teachings on homosexuality, Pope Francis hasn’t changed a thing, and almost certainly won’t. But regarding the people most directly affected by those teachings, he’s already bucked established style guidelines.

Many Catholics will resent it. No less than LGBT activists, we use language to construct our identity. A good case could be made that Francis, owing to carelessness, complacency, or both, has just surrendered a share of that identity — not an enormous share, maybe, but big enough to justify nail-biting speculation on whether, or how, it might be reclaimed. If Palestinian statehood is your goal, the last thing you want to do is start slinging around terms like “Judea” and “Samaria.”

With DOMA off the books and support for gay marriage growing, any concession on the Church’s part can look an awful lot like defeatism. But, as Ross Douthat points out in his Times blog, defeatism can look an awful lot like realism. To escape the plenary wrath of gay-marriage supporters, whose eventual victory is starting to look inevitable, Christians, including the Catholic Church, had better learn to play ball. If not, he says, support for traditional marriage could become “radioactive in the America of 2025 as white supremacism or anti-Semitism are today.”

From his days as archbishop of Buenos Aires, Pope Francis knows this drill as well as anyone. When Argentina’s gay marriage bill was in play, the future pope damned it as “the work of the devil” and “an attempt to destroy God’s plan.” When it passed, he found himself in the paradoxical position of having to work out a modus vivendi for the Church in a country where God’s plan had been voted down. It may have been this experience that shaped Francis’ vision of a “culture of encounter,” or “a beautiful path toward peace,” where Catholics and non-Catholics can “meet one another doing good.” Francis never comes right out and labels it a post-culture war arrangement, but it fills in nicely as one.

Me, I’m all for creating that culture. For one thing, in contemplating the alternative, I don’t, unlike Douthat, underestimate the willingness of a Catholic cultural rearguard to play at scorched earth, making common cause with white supremacists where our interests would appear to coincide. In Crisis Magazine, political science and legal studies professor Stephen Krason argues that the commonly accepted notion of civil rights has become “an excuse for aberrant behavior and ignoring poor personal formation and deep-seated socio-cultural problems among different groups,” including both sexual and racial minorities. On that basis, Krason thinks civil rights is due a radical retooling. Not in my name, thanks.

In the second place, I suppose I should confess that a culture of encounter is what I’ve been living in all my life. As a relatively recent convert, I still have about as many gay close friends as Catholic ones. Referring to them by the words they choose themselves seems like nothing more than simple good manners. It helps throw a positive light on my conversion, indeed, on the whole notion of conversion. Insisting on using terms they find distasteful seems a positive insult, not to mention a sure conversation-stopper, on the order of “His mama calls him ‘Clay,’ so I call him ‘Clay.'”

Here I should pause to acknowledge the Christians who, in their own words, experience same-sex attraction, and reject labels like “gay” and “lesbian.” Message received, ladies and gents — not in your name. But Andrew Sullivan, who calls himself gay very proudly, seems impressed with Pope Francis, less by what, exactly, he said on the plane, than “the gentleness, the humor, the transparency” legible in his manner of speaking. It’s true, Sullivan didn’t single out Francis’ use of the word “gay” for particular praise, but I have to believe it influenced him. Try to say “gay” while smiling — comes a lot easier than saying “homosexual,” doesn’t it?

August 4, 2013 The Hidden Blessings of a Feminist Mother
Recent Comments
0 | Leave a Comment
"Saint Joseph of Cupertino.'Nuff said."
John Stevens My Real Career: Fool in Christ?
"He did too much at one time and for the first time. Although you are ..."
Sherry de Bosque The Devil I Know
"Learn more. This was about facing the immortal soul and it's relationship with good and ..."
Sherry de Bosque The Devil I Know
"It took me a minute. But I understand, exactly. I lived in Honduras during that ..."
Sherry de Bosque A Palm for Romero, A Finger ..."
Browse Our Archives
get the latest from
Catholic
Sign up for our newsletter
POPULAR AT PATHEOS Catholic
1

A Virus of a Film: A...
Steel Magnificat
Related posts from Diary of a Wimpy Catholic

Catholic
Girls at the Altar: Decompressing A Condensed Symbol
Diary of a Wimpy Catholic

Catholic
Islam, Reality, and Renewal
Diary of a Wimpy Catholic

Catholic
Jean Ousset: The Wit and Wisdom of A...
Diary of a Wimpy Catholic
TRENDING AT PATHEOS Catholic