A Little Blood Never Hurt Anyone 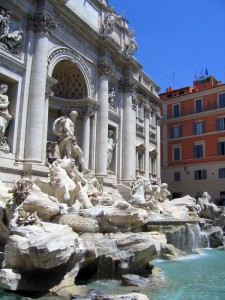 Shortly after recovering from a nervous breakdown that culminated in a suicide attempt, William Cowper composed a hymn titled “Praise for the Fountain Opened,” which begins with the following verses:

There is a fountain filled with blood drawn from Emmanuel’s veins;
And sinners plunged beneath that flood lose all their guilty stains.

Running six stanzas, it proclaims essentially the same message as “Amazing Grace,” which it predates by several years. But its tone is more abject, its language closer to the raw. The speaker describes himself as “vile,” and apologizes for his “lisping, stuttering tongue.” In its own schmaltzy, fundie way, it is very powerful, and if Flannery O’Connor’s South really was Christ-haunted, hymns like this are the rattling chains.

Aid to the Church in Need has just announced plans to create a tableau somewhat along the lines of that hymn. This April 29, it will inject red dye into the waters of Rome’s Trevi Fountain to remind the world of the Christians who have died giving witness to the faith – in particular the present-day martyrs of the Middle East. Antoine Audo, Chaldean Archbishop of Aleppo, in Syria, will speak, along with Cardinal Mauro Piacenza, International President of Aid to the Church in Need.

I think it’s a fine idea. It may lack something in subtlety, but then, the Trevi Fountain represents nobody’s idea of artistic restraint. As long as we decide we need an arresting visual to call attention to the persecuted Church, we might as well plant it amid tritons and hippocampi and trumpeting angels and floodlights.

Last December, by way of illustrating the threats to the environment spelled out in Pope Francis’ encyclical Laudato Si, the Vatican arranged for photos of endangered animals snapped by National Geographic photographers to be projected, giant-sized, onto St. Peter façade. Now that stunt, I’ll grant you, really pushed the boundaries of good taste. If you revere the Church for her defense of tradition and patronage of beauty, it’s impossible to see baroque architecture repurposed by cutting edge technology without feeling a little queasy. And, rightly or wrongly, environmentally friendly messages have a way of looking more like virtue-signaling than virtue. We already have Leo DiCaprio and the Oscars for this stuff.

But Christian witness unto death? Ah, now there’s a cause for which the Church alone can thump the tub. Last month, Secretary of State John Kerry announced formally that ISIS was guilty of genocide against Christians in those areas under its control, but he was careful to lump the Christians in with Yazidis and Shi’a Muslims. That’s accurate enough, not to mention good politics, but it also reduces all three groups to endangered species – human pandas or western lowland gorillas. Christian martyrs are more than poor saps who happened to wind up on the wrong end of a power differential. They died because they chose to proclaim their faith rather than abandon it. Their choice may represent the better of two terrible options, but it’s still a deliberate act, deserving of admiration more than pity.

Last month, after four Missionaries of Charity were murdered in Yemen, Pope Francis dealt the media a tongue-lashing for “indifference” to the persecution of Christians. It occurred to me that he had nobody to blame for this indifference but himself. The pope has a surer claim on the media’s ear than any person on earth; the ability to shape their agenda could be his, were he to craft his public statements a little more strategically. This gesture on the part of Aid to the Church in Need might just succeed in proving that point to him.

How many of the Christians killed by ISIS qualify as by-the-book martyrs is a question for the Congregation for the Causes of Saints to address in its own time. Anyway, modern-day martyrdom is not confined to the Middle East, or to clashes with militant Islam. On this point, the Church has been adamant and loud. Last year, Pope Francis made a point of beatifying Salvadoran Archbishop Oscar Romero as a martyr, even though the hit squad responsible for his murder enjoyed the patronage of professed Catholics. Event organizers have stated that next week’s spectacle is meant to highlight the importance of religious freedom, whose violation can take place anywhere. Not to put too fine a point on it.

Our faith is a living faith only because real blood flows through it. The shedding of Christ’s blood ransomed us, and continues to sustain us through the sacrifice in the Mass. It invests Christianity with a gravity beyond any thought system or do-right code. As Tertullian wrote, the blood of the martyrs is the seed of the Church. Through the mysticism of depression, William Cowper knew this, but it’s awfully easy for most of us, living in peace and safety, to forget.

In one episode of The Deadliest Warrior, someone heaved a Roman pilum clean through a leather blood bag. In less than a second, the floor was covered with – you guessed it – blood and water. Jeff Desmoulin, Armand Dorian, and the academics dressed in Roman armor squealed with glee. Me, I remembered Cowper’s hymn and thought, “So that’s what divine mercy looks like. Gross. Cool.”