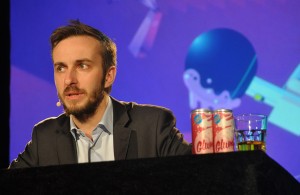 In 1998, Istanbul Mayor Recep Tayyip Erdoğan was sentenced to 10 months in prison for violating a law against inciting religious hatred. The nature of his violation? He read a poem that included the lines “The mosques are our barracks, the domes our helmets, the minarets our bayonets and the faithful our soldiers.” The poem didn’t have a thing to say about literal soldiers or bayonets, but Turkey’s judiciary, anxious to preserve the state’s secular character, found metaphor to be dangerous enough.

Now, 20 years later, Erdoğan, having clawed his way into the Turkish presidency, is ready to start throwing the book at poets – or at any rate poetasters. On the March 31 episode of his television program, Neo Magazin Royale, German comedian Jan Böhmermann read a rhymed satirical attack on the Turkish president. The poem describes Erdoğan as “the man who beats girls,” and claimed that Erdogan loved to “fuck goats and suppress minorities, kick Kurds, hit Christians, and watch child pornography.”

Following a complaint from Ahmet Davutoğlu, Erdoğan’s prime minister and Justice and Development Party crony, German Chancellor Angela Merkel condemned the poem. Meanwhile, prosecutors from the city of Mainz discovered an obscure law prohibiting insults to foreign heads of state under which Böhmermann could be tried. On April 15, Merkel announced that the government was granting prosecutors the freedom to proceed against Böhmermann.

Erdoğan, elected president in 2014 after serving for more than a decade as prime minister and gaining control over both the military and the judiciary, might be the most powerful Turkish president to take office in 70 years. Notoriously vindictive toward critics, he has milked Turkey’s anti-sedition laws for all they’re worth. Over the past two years, he has moved to prosecute more than 1,800 citizens for allegedly insulting his person, including a pair of middle-schoolers caught tearing up his posters.

Naturally, it turns the stomach to see an enlightened Western leader catering to the whims of such a grandiose character. This is doubly true when it could become a case of monkey see, monkey do – the monkeys in question being everyone with a secret or not-so-secret desire to burn down the liberal democratic state.

These days, that would seem to amount to an inconvenient number of monkeys. According to last year’s Pew study, 40% of Millennials would ban speech “offensive to minority groups.” As David Brooks observed in a recent column, increasing numbers are adopting a collectivist mentality, where “There are no permanent standards, just the shifting judgment of the crowd.” This judgment makes itself felt in “frequent moral panics, during which everybody feels compelled to go along.” It is not a style of engagement that lends itself to checks or balances.

Most of these people are on the left – among critics, the ironic nickname “Social Justice Warriors,” or SJWs, seems to have stuck. Facing them we have the Alt-Right, a loose network of young, taboo-smashing radicals, some of whom shill for an authoritarian, ethno-nationalist state on the model of Putin’s Russia. By throwing Böhmermann under the bus, Merkel could end up giving aid and comfort to both sides.

Seen through SJW eyes, the German comic could appear guilty of a kind of Bochesplaining. There he is, in all his Aryan glory, claiming to protest an increasingly despotic regime, but actually throwing spitwads that ricochet off a local minority group – one whose members have been targeted by far-right crackpots for serial murder. This was essentially what Britney Cooper said about the Charlie Hebdo cartoonists. (I wonder whether Pertev, my ex-fiancee, who breathed fire at the mere mention of Midnight Express and even Borat, might agree, despite her Kemalist convictions.) Merkel’s willingness to prosecute gives official sanction to that view.

From an Alt-Right standpoint, this looks like roughly the umpteenth time over the past year alone that Merkel’s sold out Europe’s interests to the Saracen. First she invited more than a million Syrian refugees to enter Europe from Turkey, a guilt-driven act of largesse that presented a dire threat to the virtue of European womanhood. Her belated, half-assed bid at damage control involved offering Turkey billions of Euros, along with visa-free travel rights for its citizens, topped off by a promise to speed up negotiations for its acceptance into the EU. Now, as if all that weren’t craven enough, she’s allowing Erdoğan, that beady-eyed would-be sultan, to censor TV. Time for someone to stand up for good old Boden und Blut — pass the red laces.

Add to that the fact that Erdoğan, judging by the scope of his ambitions and his leadership style, is basically Putin with a prayer rug. Alt Righters might detest him personally, but his virtuoso handling of Merkel must look like an endorsement for the figure of strongman – or, as Kevin Williamson dubbed it, the Father-Führer.

Maybe it’s provincial of me to worry first about the impact of the Böhmermann affair on American politics, but the globe is shrinking, after all. In the old days, it was only lefties who took their ideas from Europe; now both sides have gotten into the act. The liberal-democratic state may be doomed no matter what, but I do wish Merkel would give it a little CPR by telling Erdoğan: “Look, Böhmermann’s a vulgarian. He’s an attention whore. He’s certainly no John Oliver. Mehmet the Conqueror wouldn’t have wasted a sharpened stake on him. Remember, you were once fond of poetry yourself.”

April 18, 2016
Muslim Student's Grounding Proves We're Getting to Know Each Other
Next Post

April 21, 2016 A Little Blood Never Hurt Anyone
Recent Comments
0 | Leave a Comment
Browse Our Archives
Related posts from Diary of a Wimpy Catholic