– Did Marconi cheat Jagdish Bose for the Wireless Invention??

I just had a discussion with a friend on Marconi and Bose and the Wireless invention. There is strong evidence that Jagdish Bose and NOT Marconi was the real inventor of Wireless!!

Nearly 100 years after Guglielmo Marconi’s first transatlantic wireless communication, a group of scientists of the US-based Institute of Electronics and Electrical Engineers (IEEE) reported that -“the origin and first major use of the solid state diode detector devices led to the discovery that the first transatlantic wireless signal in Marconi’s world famous experiment was received by Marconi using the iron-mercury-iron coherer with a telephone detector invented by Sir J.C.Bose in 1898”. 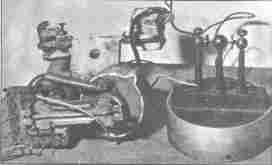 The Microwave transmitter developed by Bose

Bose’s invention of the “mercury coherer with a telephone” which Marconi used was published in the Proceedings of the Royal Society, London, on April 27, 1899, over two years before Marconi’s first wireless communication on December 12, 1901, from NewFoundland, now in Canada.

Investigations by the IEE group show that both Bose and Marconi were in London in 1896-97. The Italian was conducting wireless experiments for the British post office and Bose was on a lecture tour. Both the scientists were interviewed by McClure’s Magazine (now defunct) in March 1897.

In the interview, Bose came out with high praise for Marconi, then under attack from established British scientists who doubted his credentials. Marconi never could make it to college because of his poor high school record. Bose also said he was not interested in commercial telegraphy and that others could use his research work.

In 1899, Bose unveiled his invention of the mercury coherer with the telephone detector in a paper at the Royal Society.

Brilliant Marconi quickly grasped the commercial importance of Bose’s invention and began to explore it secretly. His childhood friend Luigi Solari started experimentally with Bose’s invention and presented Marconi with a slightly modified design in the summer of 1901 for use in the upcoming transatlantic experiment.
The Chronology:

1895
J.C. Bose ignites gunpoder and rings a bell at a distance using electromagnetic waves, proving for the first time in history communication signals can be sent without using wires.

1896
Bose is in London on a lecture tour and so is Marconi, who is conducting wireless experiments for the British post office. In an interview, Bose also says he is not interested in commercial telegraphy and others can use his research work.

1899
Bose announces the invention of the “iron-mercury-iron coherer with telephone detector” in a paper presented at Royal Society, London.

Hindu
Toupee or Not Toupee
Drishtikone