After my marriage, I took my wife all the way to Vaishno Devi instead of the customary honeymoon with just one request to the almighty Mother (Honeymoon came later, of course!). I wanted a daughter whenever we were ready to have a kid. Even if I never had another kid, it didn’t matter, but the first one had to be a daughter.

A few months into the marriage, the changed color of the strip announced what was going to be a new phase of my life. From a bachelor two months back, to a married man to an expecting dad was a quick and an unexpected transition.

First of all, I had no idea what it all meant. The more the pregnancy of my wife progressed, the more unexpected were her reactions.

One day, I was very busy working on a project which was intense and the work had to be completed real soon. So, I had put my head down and kept working on the configuration of the system. Suddenly, the phone rang, and I picked it up on a reflex. The other side was nothing but sobs. Loud sobs. I was disturbed as the voice was unmistakably my wife’s. From the complexity of the system config to suddenly this new emergency was a rather shocking change. I tried my best to calm her down, while I was panicking by the second since I couldn’t understand what had struck her! Had someone broken in? Had she fallen somewhere? What was the emergency?

The more I tried to calm her, the more angry she became and more sobbing happened! Should I come over? Maybe take you to a doctor right away? “NO, you idiot! I don’t need a doctor!!”

“NOTHING! You will NEVER understand it!!”

After the same pattern went on for some time.. the phone was slammed shut from the other end! If the call with sobs was bad, then this was worse! One, from her sobs, it seemed that my wife was in some real trouble, AND she didn’t tell me what that emergency was.. AND now, my method of interrogation had made matters worse, because now she was incommunicable!

So, I called her again and first calmed my own nerves and then talked as diplomatically – treading along carefully so as not to be “Emotionally incorrect” and started again. It seemed after some discussion, that she was depressed at being alone at home.

Well, honey, if I join you, then it will be a bit tough to pay the bills… right?

I will try and come back earlier.. and if you want I can bring some food from outside..

“Why did I come here.. to be alone the whole day?”

Tough question that one was! What was one to say? Some questions require a stupid response.. like laughing a hollow laugh or saying “Hmmmm” which neither means yes.. nor .. no.. and not even that I have acknowledged what you just said. Its simply that I am trying to keep my sanity in face of some rather outlandish discussion!

“Ok, sweetheart.. I really need to finish this and my boss is around. If you don’t want to go to a doctor, and are feeling a little better.. is it ok if I get back to do some work?”

And the discussion ended.

Now, the strange thing was that my sister in India was also pregnant at the same time. So, I thought since I could understand her a little better than the lady who had just come into my life. I explained my rather inexplicable dilemma and asked her for advise.

“So, when she calls crying in the middle of the day as I am engrossed at work. What should I do? Call a doctor? Should I take her to a doc? What??”

“NOTHING” Came the reply.

“Bhaiya, the situation DOES NOT require logic!! She WANTS to cry and sob. Just LISTEN! Got it?? Just listen!!”

“Listen to desperate sobbing? That’s all?”

“Wow, that’s something.. so you ladies call us crying .. rather howling in the middle of the day.. not for us to solve your pain and issue but for us to just listen to it??”

“Yeah! You guys don’t get pregnant, Bhaiya.. so you have no idea what it means. We just want someone to BE THERE.”

“Be there? As in a listener to your howling?”

At that point I was certain things could only get more exciting from here. If the shock of being on the road to fatherhood was too much, the subsequent erratic situations made the things even more confusing.

So, I enrolled in special training classes called Lamaze classes to teach young couples on how to handle the situation when time drew nearer to the D-date. Questions like – when to bring your wife in. What to say and what not to say or do lest she kicks you in your face while crying out of pain!

The day finally arrived. I am sure my wife was nervous but I was a bundle of nerves myself. There were so many things to take care of. In US, they use Epidural as the anesthesia. Hence, we had carefully chosen our anesthesiologist. As the labor pains increased, we waited for our guy. He wasn’t coming. We were told, he is caught in an “Emergency operation”.

“EMERGENCY?? What emergency can be more than this??” I asked angrily barely hiding my contempt! “Well we are getting his replacement”.

Yes, you better do!

As luck would have it, the second guy got stuck in the traffic. By the time he arrived, our kid was about to arrive as well. Some timing.. which the wifey didn’t quite appreciate.

And then came the moment, when our little one came to the world. Little kid. As I had always wanted my first born to be a girl. Now, there she was!

For months, I would take my daughter in my arms – hold her such a way that she faced not towards me but face the direction I was walking. This way although I held her, she was able to see the world ahead of her. Also, I would keep kissing on her head and forehead almost every other second. I became known as the “Dad who kisses his daughter nonstop while taking her around the complex”.

But girls have their own way. And, my little one wasn’t easy to sleep at night. So, I would stay awake singing to her and walking her around the house. Walking was fine, I am not sure if my singing helped the matters. During the first 4 months, the favorite place at the office for me was the coffee area. By noon, I would have finished up 5-6 cups of coffee just to stay awake!

Nevertheless, It was an unprecedented joy and I had no idea on how to express it except kissing her head and forehead whenever I held her. My daughter is someone rare and unique and I valued her the way she is.

While watching TV, she still comes and sits in front of me to have me massage her head… and I kiss her head and forehead out of my love. Sometimes more than she can take comfortably. And she would remark “Dad, its OK! Its enough.. I got the message.. Dad!!” I know what she means and she knows what I am thinking. 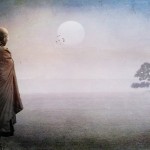 Hindu
What is the pain of losing a child?
Drishtikone

Hindu
My Mother is "no more"
Drishtikone
TRENDING AT PATHEOS Hindu