Lest I offended preachers everywhere by my last post, I’ll take a moment here to honor them with a word of recognition… before I go on to tackle another touchy issue. Preaching is hard work and to be done well it requires faithful study, prayer, reflection, and listening (both to God and to the circumstances of the community). To any who might be reading this who have preached to me, thank you. You have all preached many good sermons, and you weekly sustained this rhythm in the communities of which I have been a part, and that is a gift. (Thank you, too, for the times you have allowed me to preach, and thereby participate in this communal cadence.)

My point was not about how to endure bad preaching, but to reflect on the larger rhythm of preaching in the life of the community. Good preaching embeds itself in the apostles’ teaching—that is, in the proclamation of good news in Jesus Christ—and extends itself into the actual lives of those who listen.

Beyond that, there are talented and skillful speakers, and speakers whose gifts lie elsewhere. All of them are in the pulpit on any given Sunday (or not in the pulpit and not on Sunday, but rather, perhaps, standing before a small group in a warehouse corner on a Saturday evening or some other configuration of assembly), and we attend to their message with as much attention as we can muster. God knows there have been more bad listeners than bad preachers. Mea culpa.

This leads me to another rhythm, and one even more fraught with contention in the life of the Church than the role of preacher. The very fact I’m scared to write about this is indicative of the myth this rhythm has developed in neo-Christianity. The rhythm itself, like preaching, is intrinsically valuable in the life of the Church, but we have pummeled it into weirdness. It’s no wonder that Miller finds it superfluous.

Music. There. I’ve said it. With just that word, I’ve got all your hackles up and you’re even now looking at LinkedIn to see if I have any credentials whatsoever to address the issue of music. Let me assure you here and now, I have none. I’ve never sung in a choir, played on a worship team, or studied music professionally. Nine years of piano lessons as a child do not qualify me for anything. Yet the very fact that this might actually prohibit me from saying something about music in the Church is part of the myth. Music in the Church does not “belong” to the professionals; it belongs to the assembly for the unique purposes of Christian assembly.

Myth #3: Music in worship is about either professional excellence or emotive power, and thus its success can be measured by its impact on the audience.

Music seems to be the flashpoint of a great deal of Christian violence. Verbal violence mainly. I hope. (Though maybe you know of even more dastardly acts.) It’s practically mythological (some would say pathological) in itself how the music departments of churches are entities unto themselves that others tiptoe around, and how every single person in the pews (chairs, cushions, etc.) has a different opinion about all of the following: the songs that have been selected, the quality of the musicians, the necessity of music in the service, the instruments being used, the pace of the music, the connection of the music with the scriptures, the theology of the music, the “singability” of the music, the tempo of the music, the dreariness of traditional hymns and the shallowness of contemporary music, and on and on and on. I’ve got your blood pressure spiking just by bringing it all up.

But please, put down your Bic lighters and your pitchforks and let’s just step back a moment to look at the bigger question before us, the myth of music’s role.

Miller writes this: “Everybody worships differently. The church offers music. And let’s face it, most of them offer the same music. Jesus isn’t crying Himself to sleep at night because somebody wants to worship Him by planting a garden more than singing a song.”

There are all kinds of truth in those words, and all kinds of confusion. Yes, each individual’s worship of God is unique; we offer him ourselves, not generic human beings. And most definitely, we all have tastes in what kind of music best facilitates worship. Some of us don’t particularly resonate with the big rock band up front with the spotlights and breathless segue from one song into another; others shudder to see the choir march in with their robes and music folders. I’m not defending or attacking any of these. The issue is the neo-Christian way we’ve taken music and distorted it from any historically recognizable role in the work of assembly.

In some ways we’ve burdened music with the entire work of worship, so that in many services, the music is the only part that is considered worship. (We call the musicians and singers, the “worship team.” Many services start with “worship,” i.e., singing, before moving on to other parts of the service.) In other ways, we’ve robbed music from any meaningful contribution at all to the work of worship by measuring its value according to its ability to trigger feelings or by its professional excellence, both of which are welcome, but not essential to the purpose of music.

Miller dichotomizes the issue by pitting singing a song against planting a garden. I just don’t get that. Of course Jesus isn’t grieved because some of us would rather garden than sing. But once again, this whole thing of assembling to worship is about what we do together that we cannot do alone. Thus, of course we can worship when we garden, as when we work and when we play. The question is, what happens in a different way when we worship together and how does singing help that?

Imagine the ancient Israelites coming to worship in the Temple. Imagine one of them saying, “Well, that whole business of sacrificing and cymbals clashing and whatever just doesn’t do it for me. I’d really rather focus on God by pruning my vines.” Many may have thought and done just that, but that isn’t the way the faith was sustained or transmitted.

In the Old Testament, David appointed an entire subsection of Levites to “the service of song”: “They ministered with song before the tabernacle of the tent of meeting, until Solomon had built the house of the Lord in Jerusalem; and they performed their service in due order” (1 Chr. 5.32). One of those so appointed was Asaph, probably the author of Psalms 50, 73-83, and the forefather of many who also served as servant-poet-musicians. In 2 Chronicles 29.30, he is called a “seer.” The name means “collector” or “convener.”

Perhaps this is one of our best clues to the real role of music in the “historical arc” of Christian tradition. Not emotion; not professional recognition; not performance; but collecting, convening. Music collects us, it gives us one voice, it unites us as the Body that we are and gives us the ability to speak with one voice of praise. We speak to one another in the fullness of the Spirit “as we sing psalms and hymns and spiritual songs” (Eph. 5.19). “Let the message of Christ dwell among you richly as you teach and admonish one another with all wisdom through psalms, hymns, and songs from the Spirit, singing to God with gratitude in your hearts” (Col. 3.16). Are these not powerful rhythms? And have they not carried faith, taught faith, encouraged faith, recollected faith for twenty centuries?

[An aside: If you wish to listen to the oldest known Christian hymn for which we have both lyrics and notation, listen to the Oxyrhynchus Hymn. It dates to the 3rd century.)

In most ancient understandings of hymns, the idea behind them was the inner embrace and celebration of Christian truth; they are rich teaching tools that draw us together into the harmony of the Blessed Trinity. We probably won’t have preachers in heaven, but we most certainly will be singing. Music penetrates us at levels that words alone may not; it finds the nooks and crannies of our lives and seeps in, kindling desire, hallowing inner space, creating unforeseen connections to Christ and to one another. (Miller should be glad… after all, they’re not lectures!)

Miller is not dismissing music, as though he were some philistine who has no appreciation for the finer points of culture. But he is implicitly articulating the ways we have all weakened the role of music in our assemblies. For him, the whole business of singing just didn’t grab him, and though he enjoyed the “most talented worship team” he’d ever heard, it didn’t help him connect with God. He both put too much weight on music—expecting a visceral/spiritual wow!—and not enough—losing sight of its ability to collect him, gather him into the community. 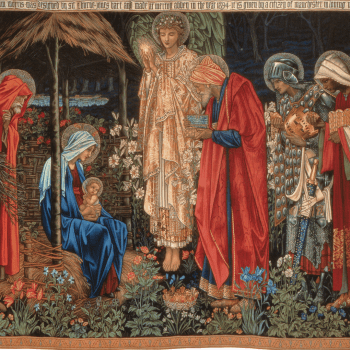 General Christian
The Adoration of the Magi: Our Impoverishment
Dry Bones