Carty’s Contemporary Classics 43: Could God Have Picked A Better Plan?

It’s been said that there are four things that God doesn’t know: God so loved the world that He gave His only begotten Son, that whoever believes in Him should not perish but have everlasting life.

Could He have figured out a better way to solve the problem of our sin at a lesser cost to Himself? Sure. He’s God. He operates by the “Golden Rule”: He who has the gold makes the rules. He has the most gold. He made the rules. He could have chosen another way if He wanted to.

Could He have chosen a way that cost Him more? No.

Could He have chosen a way that would have better demonstrated the amount that He loves each one of us? No.

Salvation, “Born Again”, “Being Saved”… they’re all synonyms that mean a secured eternity in heaven with God – and thus an avoided eternity without God or His attributes – is only possible through Jesus Christ. It doesn’t matter if you are a “Point in Time” Christian or a “Process” Christ-follower. Either way, as a human, this eternity “problem” is something you need to think about… NOW. 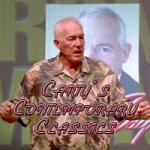 September 25, 2015
Carty’s Contemporary Classics 42: Take A Look At The Snake & Be Born Again
Next Post

September 25, 2015 The Big Picture Podcast 66: Gay Marriage and A Republic Without Representation
Recent Comments
0 | Leave a Comment
Browse Our Archives
get the latest from
Christian Podcast Central
Sign up for our newsletter
POPULAR AT PATHEOS Evangelical
1