It’s often said that because Judaism, Islam, Mormonism and Christianity share a common historical heritage in Abraham, they all worship the same God.

While Judaism, Islam and Christianity are all monotheistic, Mormonism is not. Mormons believe in many gods and that they will become gods themselves. They might worship a version of Jesus, but he’s like a bad fiction version. He’s not the Jesus of the Bible.

Separating Christianity from Judaism is a bit different.

Both share the Old Testament and a common ethic, referring to Judeo-Christian values. But where Christianity and Judaism separate is at Christ. Orthodox Jews do not believe that Jesus is the Messiah, the Son of God. And He had some pretty harsh words for them:

If God were your father, you would love me, for I came from God and I am here. I came not of my own accord, but He sent me. Why do you not understand what I say? It is because you cannot bear to hear my word. You are of your father the devil, and you’re will is to do your father’s desires. (John 8:39-47)

So if someone does not know Christ, the son of God, then he is not a worshiper of the true God.

This also eliminates Islam, since Muslims consider it blasphemy to claim that God has a son.

“O People of the scripture, do not commit excess in your religion or say about Allah except the truth. The Messiah, Jesus, the son of Mary, was but a messenger of Allah and his word which he directed to Mary and a soul [created at a command] from him. So believe in Allah and his messengers. And do not say “Trinity”; desist, it is better for you. Indeed Allah is but one God. Exalted is he above having a son. (Qur’an 4:171)

However, the Bible tells us that whoever does not have the Son

The Father loves the Son and has given all things into His hands. Whoever believes in the Son has eternal life; whoever does not obey the Son shall not see life, but the wrath of God remains on him. (John 3:35-36)

Jews, Muslims, and Mormons need to hear the Gospel. No one gets to God except through Jesus Christ.

Only those given to Jesus by the Father worship the true God… when we understand the text. 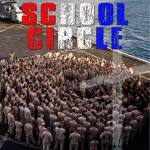 August 5, 2016 Jesus in HD 169: THE House
Recent Comments
0 | Leave a Comment
"Does the terminally unfunny Stine mention how hundreds of right-wing evangelical fascists tried to destroy ..."
Jeffrey Brad Stine Has Issues: How “The ..."
"This reminds me of the time Stine's mom told him she'd rescue her battery-operated ladies' ..."
John (not McCain) Brad Stine Has Issues: Dear People ..."
"Brad Steine: another bitter grievance-mongering Bible-thumper who hates freedom."
Wolf of Odin Brad Stine Has Issues: Lies and ..."
"some wisdom from another branch of the family:""I do not believe that just because you ..."
Christiane Smith Brad Stine Has Issues: Pro-Life VS ..."
Browse Our Archives
get the latest from
Christian Podcast Central
Sign up for our newsletter
POPULAR AT PATHEOS Evangelical
1