It Ain’t Easy: “Fear In The Night Time, making God visible to people.”

“Fear In The Night Time”

“It’s our role as Christians to be the skin through which God reveals Himself to other people and making God visible to people.”

In the darkness, we see ourselves for what we really are, and that could be terrifying. Where does one turn for answers? What do you do when you cry out to God for help and all you hear in return is silence? A probation office friend of mine tells a story of her niece, who, fearful of the dark, often woke up in the middle of the night screaming with nightmares. Comforting her, her mother would tell her that Jesus was present and she had nothing to fear. One night, following a particularly frightening nightmare, the little girl’s mother, in comforting the child, said, “Why are you afraid, honey? Didn’t I tell you that Jesus is always there to protect you?” The young girl replied, “I know he is, Mommy, but I need someone with skin.” Isn’t that the cry of the whole human race? Those of us who claim to be Christians, we know we love and obey Him. Yet, so many of us are in need of a constant touch from God, evidence of His presence. We need more than theological arguments and verbal assurances. We need Him. We need God to touch us and let us know that He’s really there. What an awesome moment it is when realizes for the first time that someone really is out there, and He loves us deeply. It’s our role as Christians to be the skin through which God reveals Himself to other people.

There was a young man of Juvenile Hall who approached me in an inappropriate way one day. Though I didn’t respond as he wished, I still had held out the option of a friendship, but he rejected me outright after that. In the weeks that followed, we did struggle and finally did establish a healthy relationship. It was difficult for him, however, because he seemingly had never had a normal relationship with an adult before. Slowly, however, he began to open up to me and often broke down and cried as the pain within him would come to the surface. During such moments, it became comfortable to slip a fatherly arm around the shoulder for support. We always ended our time together in prayer. One day, he took me aside and told me a story that made my heart sing. He had trouble sleeping at night and often woke up at night terrified of the dark. He thought of his family, his past, his victimization, his future, his problems, and the emptiness of his life. Finally, one night, he slipped his head under the covers of his bed and opened his heart to Christ. His experience of faith has taught me an important lesson. We minister sometimes and get so caught up in our preaching and evangelizing that we forget to listen to the whispers of the Holy Spirit in the dark. The next morning, we come barging into Juvenile Hall, preaching the gospel and creating havoc with the quiet words that had been spoken to the young people in the night before. To be effective as someone with skin, one must have a presence without skin, alive, in his or her own life. In the church, we call that the presence of the Holy Spirit. One most also take time to listen to what the Spirit has been saying to us prior to our entrance into the institution. Only then can one speak a word that will bring God’s presence to light. When that happens, the invisible becomes visible and the incomprehensible gives way to intelligence and joy in a changed life. “The finest of all altars is the soul of an unhappy man who is consoled and finds God.” That quote comes from Chief Justice Wilson of the Minnesota Supreme Court, can be found in the book called A Right To Silence by William Harold Tiemann and John Bush. 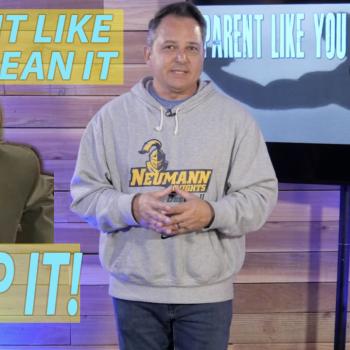