Murrow’s new member challenge – Dave Murrow writes about what he sees are the shortcomings of the church new members class.

Who nailed it for this week? It’s the great Dave Murrow again, giving us his extreme vision for a old standard church institution, the new members class. Given the times we inhabit, it may be just the type of extremism we need. Recently Dave Murrow of Church For Men posted a two-part blog on what he sees are the shortcomings of the typical church new members class. In part one  he breaks down the standard “sales pitch” delivered to prospective members, especially men, and tells us why it sets them up for failure and disillusion with the church. He then contrasts this with what Jesus told his disciples (most of whom were men).

In part two he gives us suggestions for what he would tell a new members class, and it’s a classic Dave Murrow challenge to our cultural assumptions about what it means to be a Christian in today’s world. He gives us three things that he would tell the men in the class (after he has separated them from the women in the class – a radical enough idea!). They are as follows;

Number one: Jesus is not interested in churchgoers – he wants disciples. Followers. There is a difference.

“Jesus’s mission is to change the world – but first he must change your heart.”

Number two: Jesus doesn’t want a partial commitment – he wants total commitment. Once you let him in, nothing is off limits.

“The Christian life, properly lived, will result in your death.”

“Be warned: the commitment you are now considering may lead to poverty, dislocation and death.

Number three: If you join this church, you will be betrayed. And your betrayer will be a fellow church member.

“Betrayals will come. Some will be large. Most will be small. After each betrayal you’ll be tempted to quit.”…

“Almost everyone in the Bible was betrayed. Abraham. Joseph. Moses. David. Paul. And of course, Jesus. As followers of Jesus, walking in his footsteps, why are we surprised when we too are betrayed?”

All very powerful truths. But wait, that’s not all there is to the challenge he lays down to the men of this hypothetical new members class. Before he even begins, he lays down his most radical idea of all. He points to an open door, and tells the men this;

“The things I’m about to tell you will offend some of you. They may cause you to want to walk out this door. Church membership is not for everyone, so please feel free to step out. There’s no shame. No judgment. No condemnation. I just want to make sure you understand what’s being asked of you, and the gravity of the decision you’re about to make.”.

After every one of the truths he tells the men, he points to the open door and repeats “There’s no shame if any of you would like to leave. There’s the door.”

As I said earlier, this is an extreme departure from what has come to be the norm in the Church today, and some of you may have an onset of the vapors (hearing) reading it. But as Murrow points out, it’s not extreme compared to what Jesus told His disciples, so why should we promise or claim anything different? Especially as our culture rapidly secularizes and builds resentment and hostility towards us. The very challenges he lays out will be very real, very soon. And very few pastors and churches are preparing their congregations for what lies ahead for Christians in the West.

Do I think many churches will adopt Murrow’s proposed new members approach? No, I don’t. Most pastors, women and even many men wouldn’t stand for it. But I think it would resonate with some men. Maybe even a lot of men. The kind of men who see their culture and the Church waning and caving to the non-stop attacks on the very core of our faith, and who yearn to be led into the spiritual fray to stop it. Men that would lay down their lives (literally and figuratively) for their families, their churches, their country and their Lord. They just need someone to ditch the typical new member “script” and challenge them with the truth.

Men respond to challenges, and thanks to Dave Murrow we’ve been given at the very least a formula for recruiting men ready to take our Lord at His challenge to give up their very lives. It may be the only thing that can save the church in the West. It’s also The Best Thing You’ll Hear This Week. 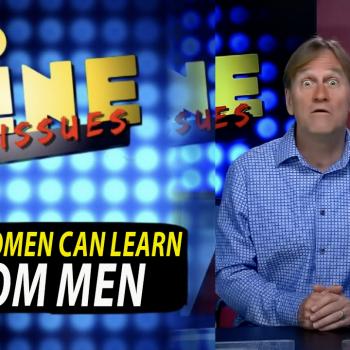 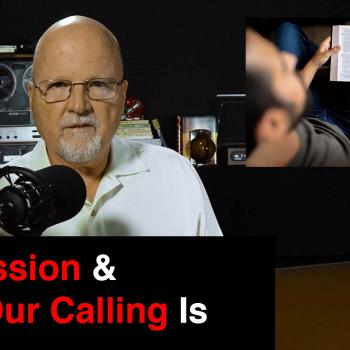 Evangelical
Submission & What Our Calling Is | What...
Christian Podcast Central
TRENDING AT PATHEOS Evangelical