The black church taught our family the meaning of han. #Ferguson

I’m finally going to say something about Ferguson. Those who needed to speak first have spoken — and spoken importantly. I am not from Ferguson, I am not a leader in a racialized community, and I have nothing to say that would alter the important contributions that Grace Kao, Brian Bantum, Cornel West, Tavis Smiley, and Soya Jung have already made.

I thought I waited because I was waiting for permission as an Asian American to say something that seemed to be of concern for African Americans — a waiting born of cautious respect, of not presuming the right to speak. (The operative word here is seems. I plan to dismantle what I just said.)

At a personal level, the waiting was unnecessary. My family has already established bonds of solidarity with African Americans.  My father was ordained in 2000 by the Rev. J. Alfred Smith, Sr., at Allen Temple Baptist Church into the ministry of word and sacrament in the Progressive National Baptist Convention. For a sense of that event’s significance, my father is likely the only Chinese American to be ordained in the denomination that claims Martin Luther King, Jr. and Cornel West. In fact, when I met Cornel West and told him of this event, he described Smith as his mentor.

Though my father never served in the black church — he always pastored in Chinese evangelical ones — Smith taught my father Asian American theology and then empowered him to do the work. When my father was in seminary at the American Baptist Seminary of the West in Berkeley, California, Smith was my father’s first instructor in preaching — there is a videotape somewhere of my father preaching his first class sermon in front of Smith that moved him to tears — before taking him under his wing for directed studies. The book they read was Andrew Sung Park’s The Wounded Heart of God, a theological account of the Korean minjung concept of han, the deep-rooted suppressed rage formed by structures of political, social, and economic oppression. Neither were Korean; nor were they Korean American. But meeting at Smith’s office at Allen Temple — the very office where the Black Panthers met with Smith to start programs at his church in the 1970s — Smith shared stories with my father of the black church’s han. Learning to articulate his experience of childhood abuse, the uprooting of migration, Hong Kong colonialism, North American racism, and Chinese church politics in the language of han, my father took those directed studies home, where our family and our Chinese church absorbed all that Smith had taugh. 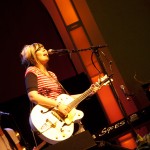 August 23, 2014 In praise of Vicky Beeching, evangelical Anglican (Part 1)
Recent Comments
0 | Leave a Comment
"I can't believe you would consider the theological lightweight Kilby as a proper critique of ..."
antoniodec Fiat mihi secundum verbum tuum: on ..."
""Milbank criticizes Balthasar for being apolitical in his aesthetic reflections, and I can see how ..."
antoniodec Reading Sobrino on Óscar Romero and ..."
"the word is receptive, which has nothing passive about it but could be the most ..."
antoniodec Fiat mihi secundum verbum tuum: on ..."
"One can never "go home," not in this life."
billwald I’ve found my way home: on ..."
Browse Our Archives
Related posts from Eastern Catholic Person