There is a post for which I got a good deal of flak that I wrote shortly after the elections in 2016. Some people accused me of being partisan, to which I replied that I’ve always been open about being on the Left in a broad way, although the fragmentation of the Left for the last forty years means that I, like many honest people on the Left, am trying to figure out what exactly it means to be on the Left.

In that post, I talked about asking my spiritual father what I should say about the elections given that I had nothing to say at the moment. Today, I feel much the same way. I have nothing to say about whatever is going on in D.C. – my thoughts on the businessman who does not seem to have given up his businesses while taking up his post in the United States’s Executive Branch have already been made abundantly clear through an analysis of his daughter’s Republican National Convention speech – but I feel like I should probably still say something.

One of my favourite books which I assigned before in a cultural geography class and will probably continue to assign in my classes is one written by a Jesuit, Michel de Certeau – The Practice of Everyday Life. One of the key ideas in that book is that if you look at the way that people actually do everyday life, it’s usually circumscribed by a system that maps out for them everything they are supposed to be doing and being and feeling and such, but they usually poach from that system to make a world for themselves based on their own mythologies, fictions, and even encounters with the supernatural.

To that end, I don’t think I’m interested in writing about what I’m feeling today or why I don’t have anything to say or why I really have no idea what is going on in D.C. right now because I am not watching it. I’ll just write about what I did today, which, I must say, is pretty boring.

Today, I woke up late. I’ve been working late on my grading and writing and such, and so my body did not allow me to wake up till after whatever it was that happened in Washington D.C. today.

I had declared, like so many of my intellectual friends, that I was not going to watch whatever happened today in D.C. so as not to give a certain reality television star the benefit of high viewership or ratings or something that I cannot remember. In any case, my reasons were less strategic than whoever told me not to watch whatever is going on in D.C. Frankly, I just don’t have time for anything that bores me. Later, I heard on my social media feeds that some sleazy businessman had exhorted Americans to drink American first or something to that order, so I poured myself a bourbon. It’s a Knob Creek, if you want to know, and it was on sale at Whole Foods a week ago, which is why I have it.

Instead of watching the festivities and protests in D.C. today, I just decided to be a stereotypical academic. The first thing you must understand about academics is that we are a people who are constantly behind. My Hong Kong academic friends often think that academics should be on top of things, like on top of the news so that we can comment like pundits. Because of this, I usually stay more on top of Hong Kong things than I do American things.

But being behind also means that I am usually behind on work. I am in particular behind on grading weekly reflections in my quite large Asian American history class. So I did quite a bit of that today – we’re learning about settler colonialism and why it matters to Asian American history, so I guess that’s relevant, but I am currently too lazy to make the connections – but that also means that I’ve given in to procrastination, which means that I’ve also been binge-watching a very slow show on Amazon Prime called The Man in the High Castle.

I remembered after some grading and some thinking and some binge-watching that some academics were reading Foucault today. When I first heard about it, I thought it was a little bit elitist and vowed not to join. But then more procrastination got the better of me, and I started re-reading my favourite parts of Discipline and Punish. Later, I learned that we were supposed to be reading the eleventh lecture in the 1975-76 Collège de France lectures titled “Society Must Be Defended,” so now I’m reading that. It’s about nineteenth-century state racism based on a theory of war that governed political thought in the eighteenth century, and with bourbon in hand, I am about to declare that this goes really well with The Man in the High Castle.

I also had some Cantonese soup that I made earlier this week. Now I am debating whether I should get Jamaican takeout. Maybe some of my readers can help me discern.

Finally, because this is an Eastern Catholic blog, I have to mention that I also prayed today and commemorated on the Newer Calendar our Venerable and God-bearing Father Euthymius the Great, an eminent spiritual master in fourth and fifth century Palestine and a hero of Chalcedonian Orthodoxy. Let us sing on this day the tropar in the fourth tone: ‘Be glad, O barren desert, take heart you who have never known labor. For a man of the desires of the Spirit has multiplied your children. He planted them in godliness and reared them with self-mastery to perfection in virtues. By his prayers, Christ God, grant peace to our lives.’

In such a time of passion when the Oval Office is occupied by a man governed by the passions, may such passionless passion grant peace to the passions that war within my own heart so that I can continue to live out my everyday life as a stereotypical academic doing the work in quietness and contributing my small part to the economia into which I have become grafted through the Holy Spirit. 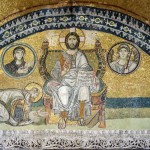 January 9, 2017
In high school, I wanted to become a Byzantine historian, but all I became was a Byzantine blogger
Next Post 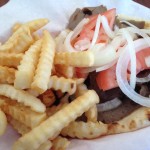 February 18, 2017 Mikrodiakonia, or why it's important that I'm not having meat for a while
Recent Comments
0 | Leave a Comment
Browse Our Archives
Related posts from Eastern Catholic Person