Sloth is not hesychasm

Patheos Explore the world's faith through different perspectives on religion and spirituality! Patheos has the views of the prevalent religions and spiritualities of the world.
Because those of us in the Byzantine churches practice the Prayer of Holy Ephrem the Syrian both in our daily prayers and in the Liturgy of the Presanctified Gifts, we are accustomed to asking the Lord and Master of our lives to drive from us the spirit of indifference, despair, lust for power, and idle chatter, as is the translation that we in the Greek-Catholic Church of Kyiv usually use according to our Divine Liturgy: An Anthology for Worship.

But indifference, I learned from Fr Alexander Schmemann’s Great Lent: Journey to Pascha, is really translated sloth. Here begins his unpacking of the Prayer of Holy Ephrem the Syrian:

The basic disease is sloth. It is that strange laziness and passivity of our entire being which always pushes us “down” rather than “up”–which constantly convinces us that no change is possible and therefore desirable. It is in fact a deeply rooted cynicism which to every spiritual challenge responds ‘what for?” and makes our life one tremendous spiritual waste. It is the root of all sin because it poisons the spiritual energy at its very source. (Schmemann, Great Lent, p. 34).

Schmemann then has the insight that the ‘result of sloth is faint-heartedness,’ and then, ‘strange as it may seem, it is precisely sloth and despondency that fill our life with lust for power‘: ‘By vitiating the entire attitude toward life and making it meaningless and empty, they force us to seek compensation in a radically wrong attitude toward other persons’ (Schmemann, Great Lent, p. 35).

As the Great Fast began this year, I was struck by how many Orthodox people I was hearing took to confessing their sloth in public. Sr Vassa Larin, for example, wrote a wonderful devotional post on ‘idleness and procrastination,’ in which she laments ‘when I have a pile of papers to grade, but opt to clean my desk instead.’ When I attended Forgiveness Vespers at the Orthodox Church in America (OCA) cathedral in Chicago, the bishop confessed to us who were there that one of his greatest regrets as a bishop was that he spent too much time browsing the Internet when he could have been praying for his people; ‘forgive me, a sinner,’ he said.

I began to reflect, then, on sloth in my own life. I’ve been writing about hesychasm because this Great Fast has made me start thinking a lot about what my friends and I call ‘intellectual chastity.’ One of the things that I realize that’s a bad habit of mine is to mistake ‘sloth’ for the state of hesychia, the stillness of the heart by bringing the intellect (the nous) down there through the Jesus Prayer. Sloth is deceptive: like the hesychastic state, it is also about being still, but it is not a sort of active stillness like hesychasm – it’s idle stillness. Intellectually, I know the difference between these two things. But the fact that I do not know the difference in my heart means that my constant mistaking of sloth for hesychia is a kind of intellectual intemperance.

This is a strange sin to ask the Lord to drive from me, especially because some of the Orthodox people I look up to as models for holiness and what I want to be when I grow up have said so publicly that they also wrestle with sloth. It also doesn’t seem to just be an Orthodox vice; I have Latin Catholic friends who tell me that they wrestle with this too, especially those in academia. Like Sr Vassa, a lot of it for academics seems to have to do with grading, although for me, some of it has to do with writing too.

But what’s strange, though, is that if Schmemann’s reading of the Prayer of Holy Ephrem the Syrian is right, then sloth is one of the more basic sins, even more basic than a lack of chastity, intellectual or otherwise. This is because according to Schmemann’s reading, sloth is what creates the conditions for a lack of integration of body, mind, and speech, resulting in despair, lust for power, and idle chatter. This is a little bit different from a Puritan approach to laziness, which seems to have more to do with developing a work ethic. Sloth here is not just about getting our work done. It’s mistaking prayerlessness for prayerfulness.

No wonder the OCA bishop went on to say that if the spiritual life is like a ladder, as Holy John Climacus said it was, it’s the folks on the top of the ladder – the monastics, the scholars, the bishops – who get dragged down the most by the evil spirits. If I can make sense of his making sense, it’s so easy to confuse sloth for hesychia that one can get lazy once one thinks that one has made it, and that’s when one gets done in.

In this way, I realize that what is going on with me this Great Fast is that I am reflecting on what hesychasm is and is not. I am learning that what may be easy to talk about intellectually is more difficult to put into practice. In this way, I am really a terrible hesychast, and in many ways, the stories of sloth that I hear from those I look up to make me feel like we’re all in this together during this Fast, learning afresh as the people of G-d the difference between sloth and hesychasm at the level of the heart.

Lord Jesus Christ, Son of G-d, have mercy on me, a sinner. 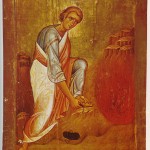 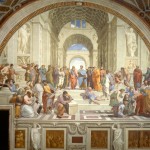 March 16, 2017 I still believe in the streets of academia
Recent Comments
0 | Leave a Comment
Browse Our Archives
Related posts from Eastern Catholic Person