Patheos Explore the world's faith through different perspectives on religion and spirituality! Patheos has the views of the prevalent religions and spiritualities of the world.
A few years ago, when I was very single, I used to see a Filipina nun in the Latin Church for advice about women. I was Anglican at the time, and Sister told me that that was wonderful; she was also into Jung and Rahner and some ecofeminist stuff and assumed that I was just another liberal Anglican. For her, this was supposed to mean that I was much more progressive than her church. The truth is that I was probably cooler as a person than as an Anglican, coming through the conservative ‘Global South realignment’ as I did. But though I dropped some clues about my less-than-liberal Anglican origins by relating how much I enjoyed the work of Hans Urs von Balthasar (which her spiritual director also made her read) and Benedict XVI (she loved Deus Caritas Est), the question of just what kind of Anglican I was seldom came up because we spent most of our time talking about girls.

I came to Sister one day asking for help to discern whether I should ask out a very attractive blonde in the evangelical campus group I was in at the time. After giving her standard that’s so wonderful, love is like an ocean, you do not know where one begins and the other ends, as the waters cover the sea, she said that we should pray together about it. As a self-proclaimed liturgically high Anglican (which is as perfectly compatible with being an evangelical as it is with being a liberal), I thought she had a form prayer for me to read. It turned out disappointingly that she just wanted to pray extemporaneously, like evangelicals. So I made the sign of the cross in the left-to-right Latin direction, because that is what the cool Anglicans do, and then I mumbled some Christianese about wisdom and discernment, and then it was her turn.

She said: Justin, I see the Blessed Virgin standing next to you.

What followed was an awkward moment. I wasn’t sure what to say, but unfortunately for my Anglican respectability, I did feel a palpable, maternal presence. It was a thick joy, a soft love, an aura of sweet thankfulness, a gentle gaze, a palpable presence that was distinct from the way that the presence of the Lord might feel in a charismatic gathering. Sister had told me in another session that the charism of her religious order was thankfulness in all things, and she said that I should be thankful, be still, and take in her love. She then said that I should ask deep within my heart the question I had asked her and to listen deeply to the true answer echoing from within myself. I did, and wanted so badly to hear yes. I heard instead a soft, deep no.

I found out that weekend that the blonde already had a boyfriend, and as chance, fate, or providence would have it, three weeks later, I was on my first date with the woman who miraculously agreed to marry me a year later. I told one of my desperately single evangelical friends this story once, and now he can’t stop telling me that my wife is my Virgin Mary. My wife, who is evangelical, says she sure hopes she isn’t.

I imagine that Mary would say the same. The archetype thing has been sexy for a while, but these days, I am in the habit of telling my evangelical friends that I still have a personal relationship with Jesus. And Mary. And my patron saint. And a couple of other ones too. Mary is not a symbol, and she is not just an archetype. She, like my wife, is, in her own right, a person – her own person – and it was as her own person that the nun saw her standing next to me.

The more difficult question is what it means that the Theotokos was standing next to me. This is an ideological question, an attempt to read the scattered signs for quilted meaning, a form of divination practiced both by shamans and social scientists. Does it mean that it was the Theotokos herself who said no to the blonde and then provided the woman who became my wife? Maybe, but who knows? Did it mean that I had to become Catholic by virtue of the Theotokos standing next to me? Probably not, as this meant that my relationship with her pre-dates my becoming Eastern Catholic. Could it be that the nun was putting ideas into my head? Possibly, but then, it was she who told me not to become Catholic.

The more I look back on this event in my life, the more I am certain of only one thing: that it happened, but I am not exactly sure what happened. It would be a cop-out to say that the presence was meaningless; persons holier than me in my own Kyivan church (say, at Hrushiv), in our sister churches of all Christian traditions, and even among those who do not count themselves as Christian have found meaning in the appearances of the Theotokos to them. But she did not speak to me, and where there are no words, I cannot put them into her mouth. Fiat mihi secundum verbum tuum was not addressed to me.

What can be known is only who the Theotokos is, mostly from the Gospel according the Holy Evangelist Luke. In the events of the birth of Jesus, the Theotokos is mostly contemplating what is happening, pondering these things in her heart. The silence of the Theotokos means that she is simply watching, bearing witness in my case to an act of discernment. It is not she who discerns for me; it is instead me discerning in her presence, being present to the Spirit whom I bear in my own body while the God-bearer stands next to me.

I am not very sure what her contemplative presence adds to my discernment, though I am thankful for her. But what I do know is that her closeness means that I can talk to her about hers, what she saw and what she sees from her perspective as a person. In fact, this is a little closer to what my relationship is like now with the Most Holy Theotokos, and perhaps in writing about it, I can discern further what this grace of Mary God-bearer standing next to me is.

This is the second in the posts on the Dormition Fast. The first one can be found here. 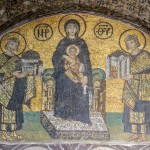 August 1, 2017
The bearing of God, the death of triumphalism (Dormition Fast #1)
Next Post 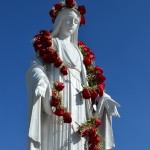