Being afraid of the Theotokos as Catholic, charismatic, carnal (Dormition Fast #3)

Patheos Explore the world's faith through different perspectives on religion and spirituality! Patheos has the views of the prevalent religions and spiritualities of the world.
I attended a school run by an Assemblies of God church in Fremont, California, from preschool to junior high. I suppose that it might be tempting to conclude that me and everyone there was Pentecostal. To me, that’s funny.

I don’t know whether the internal religious and racial diversity of the school was a function of being in Fremont, where the population is just over half ‘Asian’ in an aggregated way and is so religiously and racially diverse that Harvard University’s Diana Eck made a documentary about it, or if it was that the school accepted everybody who wanted to go to it regardless of religion and race, especially (as one secular Chinese parent put it) because ‘they teach you how to be a person there,’ referring to the morals. Of course, we also learned quite a bit of theology along the way, including the formulation that one can be ‘controlled by the Holy Spirit,’ which upset the Baptist woman who taught me fifth grade.

I had a lot of Catholic friends at the school, some of whom even talked about their relationship with Mary. It sounded pretty interesting the way that they talked about her; the only prior knowledge I had of Mary was that my blonde preschool sweetheart played Mary in the Christmas play opposite my Joseph (this is in fact how we became sweethearts). The notion of getting to know the real Mary, as if she were alive like Jesus, sounded wonderful. I mentioned it to my mom in the car one time, hoping that the practice of prayer to Mary was some secret that we kids hadn’t learned about because we weren’t old enough. She said, though, that that was something only Catholics did, and because we weren’t Catholic and it wasn’t in the Bible, we didn’t (and shouldn’t) do it. A few weeks later, she also mentioned that my dad, who was having a really hard time pastoring through the charismatic movement sweeping through our Chinese church (people were falling over, barking like dogs, laughing uncontrollably – all the good things), told her not to listen to a certain woman Bible teacher that she had enjoyed because she was also secretly charismatic. This is how I came to associate Catholics and charismatics as people with very interesting spiritual experiences that we didn’t get to experience because we weren’t them.

I started to really care about being who I really was as a Christian – a Protestant one – when I went to a Catholic high school. In fact, my parents told me that with all the cussing and Mary prayers and talk about wild sex that were the stereotypes of Catholic schools, any whiff that I was getting taught ‘wrongly’ would result in me getting pulled out of that school. This is why I told the teacher who did the entrance interview for me that I would be interested in getting into the school because of ‘morality’; I really wanted to go to this school, but more importantly, I wanted to stay in a school for all four years and thought it would be better to get thrown out before it started than be pulled out for immorality. I was accepted; the teacher who did the interview, whom I later learned was a ‘spirit of Vatican II’ kind of guy, told my parents that he was very impressed with me, which now on hindsight informs me that the supposed ‘schism’ in the Latin Church over morality is truly overrated.

I did not know anything about Catholicism when I got into the school, though, which is why I came prepared to do battle for the truth of the Bible, the Gospel, and faith alone, only to get a B- on my first quiz in theology, which was really depressing as a major Asian fail in a subject at which I thought I was superior to the Catholics. Disappointingly, I didn’t get to stand up against Mary at all, and by the time I learned anything about the rosary, it was my senior year in a course on Christian spirituality where I learned that the ‘Hail Mary’ was an optional mantra that people could repeat to focus on their actual prayers. In terms of substantive conversation about mariology, I only remember one conversation late in senior year with a devout friend who told me that sometimes you don’t want to talk so directly to Jesus, so you talk to his mom, and I easily parried that by appealing the letter to the Hebrews, where the unknown biblical author says that we even have direct access to God through the sacrifice of Jesus.

What I did become practiced in at the Catholic school, however, was the art of being asexual. If I were to marry a Christian girl and Catholics had really been playing fast and loose with the Truth and fulfilling all the wild and crazy sexual stereotypes of Catholic school, then it was important to resist being attracted to quite a number of my very attractive peers, especially when we hung out all the time. I even brought one of them – a stunningly gorgeous woman, come to think of it – to senior ball, and nothing came of it; little wonder, of course, that we are no longer on speaking terms. In turn, because I actually had a sex drive, this meant that I actively tried to will myself into being desperately attracted to women (especially Asian ones, and especially the Chinese subset of those, and the Cantonese subset of that) whom I knew were Protestant, especially of the Bible-believing variety (I didn’t know they were called ‘evangelical’ at the time). I wonder sometimes whether at least in my case – and perhaps in my case only – if the stereotype of asexuality among Asian American men was self-fulfilled by me because I had to have my erotic desires rationalized by my racial and religious identity; because I have not done an empirical study on this, I can only wonder how applicable this is further across the board, though it should be said that this is precisely the problem that the Asian American writer Frank Chin and his buddies confront in their anthology Aiiieeeee!

But this is the erotic price one pays for trying to correlate desire with identity, I think, because the Catholic, the charismatic, and the carnal are all very messy business. Each of these spiritual orientations to desire flows through bodies, and bodies are so oriented to desire, this makes them bad conduits for ideology. The problem is that bodies are also the only conduits for ideologies, strictly speaking, and one of the greatest modern ideologies is that the mind controls the body, which is ideological because it is an ontological lie that most people seem to believe anyway. Indeed, since we are on the topic of my barely competent abilities in the politics of identity, the control of the mind is basically what evangelical morality is about: at least growing up, I was taught, for example, in books by apologists and videos from large evangelical organizations focused on psychological healing in churches and families that in a situation of temptation, it is best to go in knowing what decision I am going to make with my body – and to will my mind to make the moral one.

But is this not the very way that I learned to resist the presence of the Theotokos in my life as a child, to relegate her into the same category that housed Catholicism, the charismatic, and the carnal? Is this not a denial of the bodies of persons who were all around me in an asexual Asianness of my own making? Is this not how I learned to be afraid of falling in love, as I related in my post on the evangelical phenomenon I Kissed Dating Goodbye?

In contrast, the icon of the Dormition of the Theotokos emphasizes the repose of her body and displays her in a new body as a baby wrapped in swaddling cloths being taken up by the Lord into her nativity in heaven. There is something related between the way that I encounter the Theotokos in her bodily speech of G-d, her bearing of G-d in her body, and my approach to the Catholic, the charismatic, and the carnal. I don’t quite know yet how to articulate it fully, but for me, in terms of my experience of the world, it has to do with how I was raised to be scared of all three – and thus afraid of the Theotokos herself.

Just as the liberal laundry list of reasons for why multicultural diversity is good might fall onto the deaf ears of the resentful, one could give Protestants a thousand proofs from Scriptural texts, apostolic teaching, patristic sources, and church tradition of the Theotokos. But lack of proof was not why I pushed her away, along with pushing many persons around me away, although it bears saying that no particular identitarian category – Protestantism, Asian American, school nerd – is singularly responsible for my anti-social tendencies. The truer truth is that bodily encounter, especially of the kind marked by desire, is scary, and for me, being Protestant, being an asexual Asian, and ultimately being one who does well in school facilitated that fear all too well all too long.

This is the third post in my series on the Dormition Fast. The two previous ones are:
1. The bearing of God, the death of triumphalism
2. ‘I see the Blessed Virgin standing next to you’ 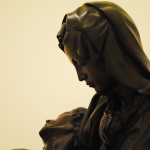 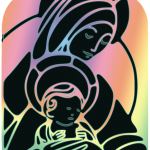 August 6, 2017 On my fundamentalist feminist theology (Dormition Fast #4)
Recent Comments
1 Comment | Leave a Comment
Browse Our Archives
get the latest from
Eastern Catholic Person
Sign up for our newsletter
POPULAR AT PATHEOS Catholic
1