A few Sundays ago, I invited the group that I facetiously call the Kyivan Psychoanalysis Study Group to my apartment for a house blessing. It was a few weeks after Theophany, and we have a tradition in the Kyivan Church that the holy water that we bless to make present in our lives the baptism of Christ should be spread to our homes as well. Christ is baptized in the Jordan by John, sanctifying all the waters of creation by laying claim to them with his body. In the blessing of the home, Christ proclaims his ownership of the the everyday space where I live as well.

It occurred to me after I invited everyone over that I would need to do some cooking. One member of the group messaged me asking whether we would be having dinner. Of course, said I impulsively, remembering the chicken congee I had made the night before. The next day, I went down to the store and bought some chicken thighs. An hour before everyone arrived, I began baking them.

People trickled in to the smell of baking chicken thighs. One member of the group said that I had this Ukrainian thing down pat. I hope he liked the thighs. Most people told me they were good, actually, but I found them a little too oily. If anything needed improvement, it was the rice that was too dry, as I recall our Asian American feminist blogger member saying. Her name is Grace Yu, and she is going to have a blog, and it’s ok that she said that, because she brought a bacon salad, and we like bacon. Another couple brought a homemade apple pie.

One of the unofficial leaders of our group is Fr Myron Panchuk. He has a PhD in depth psychology, and we bonded over pizza and our shared affinity for the Giant of Ljubljana, Slavoj Žižek. His assistant came with some of the materials for a house blessing: his epitrakhil (the thing a priest wears around the neck), a blessing cross, holy water, and a candle. Have a look at the candle, Fr Myron said. The brand on the tag was ‘Secular Saints,’ and it had an icon of St Sigmund of Vienna, with an attached prayer invoking his deliverance from dark phantasies of the night. It was a Freud candle. One of our members had found it in a store in Milwaukee and given it to Fr Myron as a gift. Now Fr Myron was returning the favour by using it in the blessing of my apartment.

I have been reflecting in this Preparation period for the Great Fast on this moment. I was not exactly sure why it stayed with me so much, other than the Freud candle joke being a little over the top. It could have been that when the singing started, I realized that we might have some of the best singers in the Kyivan Church in our group. It might have been the jovial, bourbon-infused conversation around the table afterward. Perhaps it was that afterward, we even skyped Eugenia Geisel in from Seattle.

But in the quietness of my heart, I think I know what was going on. Fr Myron points out in his dissertation that Freud was a Ukrainian Jew who faced racism as he worked in the hospital in Vienna. Having published widely in neuropathology, he opened a clinic. But what is often missed in the popular renditions of Freud is that his patients were a lot like him: they were Jewish, often from the eastern parts of the Austro-Hungarian Empire, who faced day-to-day antisemitism. It took some of Freud’s admirers like Adler and Jung to popularize psychoanalysis beyond this racialized community, but when they did, the racializing experience of modern colonization on the human psyche became a little muted. Of course, the theorist of colonization Frantz Fanon was himself a practicing psychiatrist in Algeria, where he became a revolutionary. But there is something to be said for how Fanon is often known as an anti-colonial psychoanalyst, as if you need the qualifier because psychoanalysis is supposed to be European and therefore white. It is not. It was born out of an experience of racism.

Fr Myron and I have talked at length about how historic and contemporary experiences of Ukrainian marginality, Jewish and otherwise (for this distinction, Ukrainians are often trolled, though the actual relations are very complex because they are not in a zero sum relationship), have led to all sorts of pathologies. Actually, I have had more than one conversation with more than one person about this. A Ukrainian in Richmond told me that there is a kind of shame for some family members who had been in the Ukrainian Insurgent Army, or UPA, as goes the Ukrainian acronym. Julian Hayda, who was the actual purchaser of the Freud candle, crafted the following statement when I asked him more about UPA:

No matter which side of the Second World War the conventional colonizers were on, UPA was on the other side. To the Soviets, their resistance to Russian hegemony was a threat. To the Nazis, Slavs were on the second-lowest rung of racial hierarchy, but their disenfranchisement made for easy exploitation. Many interwar insurgents, including UPA, initially collaborated with the Nazis against Polish and Soviet imperialists, for example. For some, it was a way of avoiding Nazi slave labor camps which other Slavs had been imprisoned in. They were referred to as “osterbeiters” or “Eastern laborers” in German. When the war ended, UPA soldiers and osterbeiters alike were not treated very well in the refugee camps. Some hoped the U.S. would provide shelter, while others were accused of real or perceived Nazi collaboration and ended up in Siberian labor camps. Some hid their identities as they fled from Europe. Some, like John Demjanjuk, were discovered living in America by German law enforcement decades later, and, in an effort to vindicate the Germans, were falsely prosecuted for war crimes.

It is not easy to live with that kind of family history, knowing that the trauma is not just something that was done to you, but something that you may have been complicit in too, that the historic experience of the European colonization of Ukrainian lands made your ancestors misread the powers that be and side with the worst of people. The danger of a colonized people being non-ideological is that you don’t know what ideologies are colonizing you. Antisemitism in this case is not just an act of horrendous colonization; it is also its symptom. It is difficult to live with this knowledge. It stymies your capacity for liberation, as you know deep down that you too were and probably still are an oppressor. It can even lead to suicide.

No wonder popular forms of psychoanalysis also pervade Chinese evangelical communities. The impression that the churches of my youth is that we are a bunch of Bible-thumping fundamentalists. Nothing could be further from the truth. Since the 1980s, the elites in these churches all found their way into some kind of counseling psychology study and work with the hope of helping Chinese people ‘heal.’ We too have our family traumas, memories of war, and experiences of colonization. Our symptom, then, is that we search for this, that, and the other pop psychology model to heal ourselves and grow our churches: the church growth movement, spiritual gifts checklists, enneagrams, Myers-Briggs, gay conversion therapy, family systems theory, contagious Christianity, cell group models, authentic sharing, basic life principles, kissing dating goodbye.

Ironically, the effect that all of this intellectual shopping has had on the Chinese evangelical communities I’ve experienced has been a kind of haphazard thought control. You don’t just talk to people at church; you have to dig deep into their feelings and mine them for whether they are on mission contributing to the growth of God’s kingdom. Talking about feelings, doing authentic life together, understanding each other’s personalities, and so on is supposed to liberate. But in practice, it just piles repression on top of repression. Oftentimes, there is no fellowship in such communities. It’s a panopticon with people who aren’t very good at surveillance because what they are really doing is trying to see themselves in you. Our group’s Asian American feminist blogger, Grace, tells me that her experience is slightly different. Then again, she also has an obsession with what ‘community’ is too, partly because of these dynamics in her history with evangelicalism, Chinese or otherwise. Maybe she’ll work it out differently from me. I have a lot to learn from her.

But what I experienced that night at the house blessing was a kind of spontaneous conviviality, and Grace said so too. We were not using psychoanalytical techniques on each other; we used a Freud candle as a joke in the house blessing. But jokes, as Freud would say, give the lie to something more serious going on. In our laughing and eating and talking mostly nonsense with no agenda, we took the lid off of a kind of neurotic repression and just let the words hang out. This was not the first time I had experienced this feeling in the Kyivan Church; in Richmond, our coffee hour is equally chaotic and convivial, and Chinese Protestants who experience it tell me that this is the kind of fellowship they had always longed for. But blessing the apartment with a Freud candle gave these feelings a kind of quasi-liturgical form. We are a church of beautiful chaos, a deacon in our eparchy likes to tell me, and as I think of it, I am not surprised that one of the major theologians in our church, Adam DeVille, has been writing extensively about Freud these days too.

Perhaps these reflections make for a theological agenda that is emerging in our church. I don’t know. What I do know is that as we blessed the apartment with the waters of creation, we were together in convivial joy. We saw a crack in the repressions of our complex colonized communities. But I do not pretend to know where that opening might lead, except that I’ll be pondering it a lot more during the Great Fast.

February 13, 2018
Tolstoy and my model minority mirror
Next Post 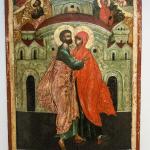 February 15, 2018 They call me Prof Yenta
Recent Comments
0 | Leave a Comment
"I can't believe you would consider the theological lightweight Kilby as a proper critique of ..."
antoniodec Fiat mihi secundum verbum tuum: on ..."
""Milbank criticizes Balthasar for being apolitical in his aesthetic reflections, and I can see how ..."
antoniodec Reading Sobrino on Óscar Romero and ..."
"the word is receptive, which has nothing passive about it but could be the most ..."
antoniodec Fiat mihi secundum verbum tuum: on ..."
"One can never "go home," not in this life."
billwald I’ve found my way home: on ..."
Browse Our Archives
Related posts from Eastern Catholic Person