Shu, awaremeyo: reflections on Paul-san’s reception and the baptism of his son

Shu, awaremeyo: reflections on Paul-san’s reception and the baptism of his son September 15, 2018 Justin Tse

In this time of the postfeast of the Universal Exaltation of the Holy and Life-Giving Cross, I would like to reflect on the reception of a brother of mine in the Lord whom I shall call Paul-san into our Eastern Catholic Church, together with the baptism of his youngest son. Paul-san and his family are from Hokkaido Prefecture in Japan, and they came to our temple in the middle of August. Paul-san was already a Catholic in the Latin Church; his son, however, had not yet been baptized. We received Paul-san by ascription, acknowledging that he was already in full communion with us but now has decided to live under our canons and discipline and share in the life of our church in a direct way. Then we baptized his son, chrismated him, and shared communion with him.

I had the great honour of serving as the cantor for both services, the reception by ascription and the baptism, and I had a fantastic kleros to work with. As is the custom of our Byzantine churches, we try to have the liturgy in the vernacular language of the places where we are situated. Paul-san and his family spoke Japanese. Because of this, we did the easiest possible adjustment to our liturgical practices that we could: we changed all the Lord, have mercy responses, which make up the bulk of all of our liturgies anyway, to Shu, awaremeyo. We also learned the Trisagion in Japanese, and Paul-san did the Apostol readings too.

Paul-san is also a theology professor in Japan, so we asked him to share about why he took the step that he did. He has, after all, always been in communion with us, so we were curious as to what becoming Eastern Catholic from the Latin Church meant for him. I think he also wanted us to relate to him, so he began in his reflections with the Japanese Empire – or rather, the Greater East Asian Co-Prosperity Sphere – in the early twentieth century. He said that that was a time in Japan when violence was celebrated, and Japan was basically at war throughout Asia.

But after the war, things changed. The ninth article of the new Japanese constitution, he pointed out, has two points:

(1) Aspiring sincerely to an international peace based on justice and order, the Japanese people forever renounce war as a sovereign right of the nation and the threat or use of force as means of settling international disputes.(2) In order to accomplish the aim of the preceding paragraph, land, sea, and air forces, as well as other war potential, will never be maintained. The right of belligerency of the state will not be recognized.

Realizing that war causes so much suffering, Japan renounced its imperial ends, he said. Of course, as others at the temple pointed out to me later on, Paul-san’s reflections demonstrated his radical political stance in a contemporary age of Japanese nationalist revival, and indeed, an age of neo-authoritarian romance throughout the world. I am sure Paul-san knows how radical he is in his context, and the beauty of it is that, even without him having to tell us, we understand the risk of his claims. After all, he was doing theology. Those of us who were there understood that the Japanese did not give up war just because they wanted to – this was a concession to an emerging liberal international order being headed by the United States and in contest with the Soviet Union. We also know something of international news, and we know that Japanese nationalism both then and now is not exactly peaceful. By putting together the information we know and what Paul-san was telling us, we know that Paul-san’s reflections are deeply Christian, that it is as a Christian that Paul-san himself says that war is evil and that it should be renounced by the nation.

These reflections by Paul-san are a gift to our church. My spiritual father pointed out recently at my Chinese friend Faith’s chrismation that just as her entry into the church was a fulfillment of the prayers of the Syriac missionaries like Alopen and the Jesuits who came much later, Paul-san’s reception and the involvement of his entire family in our church is the answer to the faithfulness of those that became known as the hidden Christians in Japan, the ones who went deeply into hiding after being persecuted by the shogunate. Certainly, with the popularization of Endō’s Silenceby Martin Scorsese, we are well aware of these stories of persecution and the pain that that experience wrought on the Body of Christ throughout the world. But now Paul-san and his family are in our church in an open way, and in that openness, they still maintain the spirituality of Christian critique toward the acts of imperial violence. Like Faith bringing her experience of the Chinese church of martyrs into this church of martyrs that is the Kyivan Church, Paul-san brings the spirituality of the Japanese church into our liturgical gathering, calling us to be critical of the violent acts of empire because it is inflicted on human bodies that are the very icons of Christ.

Are not these reflections so appropriate as we contemplate the True Cross that St Helena found in Jerusalem and that was exalted in Constantinople every year until its fall? It was in that sign – the sign of the holy cross – that Constantine conquered and established Christianity as the imperial religion. The cross, once the sign of imperial violence against those who opposed it, became the sign of empire itself. And yet, as we sit with the echo of the postfeast of the cross’s uplifting today, are not the empires that signed themselves with the sign of the cross broken? Even those nation-states that we criticize as imperialistic today are just playing at empire, with bourgeois figures as dictatorial leaders whose propaganda is only convincing if you consciously let down all your critical faculties and embrace a cynical approach to life. The cross has indeed conquered, for the empires that claimed it in conquest have been negated from within.

In this sense, the cross is the merciful negation given to us ordinary Christians who have to live in a world of national regimes playing at imperialist fantasy. Paul-san has offered his experience of the nation to our church as a sign of this subversion, that as Christians, we do renounce the evil one and spit on him because ours is the way of crucifixion, of dying with Christ that we may rise with him. With Paul-san and his family, we continue to sing, Shu, awaremeyo, because these supernatural insights can only be seen with the eyes of the Spirit by which we are received into the gathering of the holy ones who mystically represent the cherubim in liturgical action. 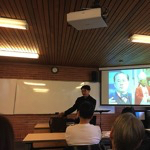 September 14, 2018
The moral, the theological, and the political (Series Recap: ‘I give you three years to narrate yourself’)
Next Post 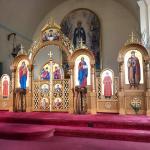 September 17, 2018 The competence of the laity: reflections on a summer of unofficial cantoring
Recent Comments
0 | Leave a Comment
"I can't believe you would consider the theological lightweight Kilby as a proper critique of ..."
antoniodec Fiat mihi secundum verbum tuum: on ..."
""Milbank criticizes Balthasar for being apolitical in his aesthetic reflections, and I can see how ..."
antoniodec Reading Sobrino on Óscar Romero and ..."
"the word is receptive, which has nothing passive about it but could be the most ..."
antoniodec Fiat mihi secundum verbum tuum: on ..."
"One can never "go home," not in this life."
billwald I’ve found my way home: on ..."
Browse Our Archives
get the latest updates from
Eastern Catholic Person
and the Patheos
Catholic
Channel
POPULAR AT PATHEOS Catholic
1