I had an Asian American evangelical uniate dream last night

Last night, I had the Asian American evangelical uniate dream to own them all.

I dreamed that I was in Richmond, and somehow Julian from Chicago was with me. For some reason, we were going to attend an evangelical worship service at the charismatic Anglican parish at which I used to work. The church is named for ‘Emmanuel.’ It occurs to me now that one of the free associations that may be being made here is that I prayed a Reader’s Emmanuel Moleben last night for St Philip’s Fast, and the spelling of the word ‘Emmanuel’ in the text I was using invoked the name of the church at which I was a pastoral intern discerning a call to ordination in the Anglican priesthood, with the aim of reaching out to younger people. It is distinct from the form ‘Immanuel,’ which is what we actually use for the Moleben title in Richmond and also was a separate parish in our same Anglican Mission coalition in Vancouver.

We got to the church, and they had dinner prepared buffet style. The buffet, however, was not in the typical parish hall, but off to where we used to host coffeehouses when we had a youth group there. After dinner, we found a gorgeous, large grand piano. I sat down and began to play it. What came out was the Vineyard song, ‘You Are a Holy God,’ the one that is followed by an all-consuming fire, and as I played, my hands not only began to chord the progressions, but also fly in dexterous arpeggios across the keyboard. I sat there for a long time. Julian came by and motioned that we had to go in. I kept playing, at least for another three minutes, which is quite a while music-wise. It was quite emotional for me, but I was not singing along. Instead, I felt free at the piano and simply let my hands go, almost the same way that the late Gospel pianist Anthony Burger allowed his fingers to fly all over the piano. It was deeply emotionally moving for me to watch my hands have the freedom to do that, and I suspect that is why I lingered here.

Eventually, we went in. The seats had been taken out (this church, being in a former warehouse, does not have pews, but cushioned seats), and so had the altar, and so had the screens. Instead, there were couches scattered everywhere, as well as small bookshelves with children’s books and board games. The lyrics were projected against the south wall, with white words against a blacked out screen, in a format that looked like it was imitating transparencies the way that we used to in the youth group that was called Footprints! at my childhood church.

I had a look at the small bookshelves, and then I see at two couches against a coffee table my former Sunday school student and the pastor of the church sitting together. They are hunched over a book of Chinese sayings for children, and my student explains to me that she is teaching the pastor, who is Cantonese and grew up in Hong Kong, the terms. The pastor replies in English inflected by a sophisticated urban Cantonese accent that he is enjoying it, wow, and laughs mischievously, as if he is revisiting his days as a little boy. My student explains the next term in very competent Cantonese, and the pastor looks very excited to learn it. The situation is like they are in a Cantonese youth group together with a vast age difference having fun at the expense of a children’s Chinese school book.

At this point, I see Julian wandering the room, not enjoying it at all. He is not really sure what he is doing there, his facial expression gives off, so I motion him over to two couches facing an east wall. The music begins to play, and it is a song that I recently heard at a worship event that is probably something like Delirious or Jesus Culture. I sing along, and Julian gives me a puzzled look. I learned it at a recent evangelical service I was at! I shout into his ear. He looks even more perplexed. Don’t worry! I continue. I was just invited to go to these events to speak at them! But I’m in this church and go to way more of our services than the evangelicals’ Julian perks up and chuckles with satisfaction. For some reason, the screen is now projected onto an east wall, and people are alternatively sitting on the couches, standing, raising their hands, looking lost, or whatever. It is quite a scene, as if the sanctuary had been transformed into a large living room, but this set up also begins to remind me of the time at the denomination’s national conference when we had a casual late night worship party and obviously inebriated white people who had split from their dioceses over sexuality issues and joined African provinces were singing their hearts out to praise and worship songs. The room is also oriented the way that Asian American InterVarsity at Northwestern University orients their room for large group meetings.

As the song moves into a nonsensical glorious chorus with something like King of God, arise! (with the last bit causing the room to raise their hands gloriously), an Asian woman walks by. It turns out that it is my Northwestern mentor. She looks at the two of us very disapprovingly and demands to know what it is that we found funny about the song. We reply that it is so outrageously hilarious that they knew some countries outside of America but blanketed all of Europe. She shakes her head in a kind of I can’t believe you guys way – there is, after all, nothing funny about neocolonialism – and continues onward. On hindsight, I reflect that I have been reflecting quite a bit with my academic colleagues about the death of the Asian American evangelical missionary John Allen Chau in his neocolonial approach to the Sentinelese. For all that I say about not caring about this situation, my unconscious does not lie.

And then the scene dissolves. It turns out the whole thing was a dream.

In the public words of one of my more regular but very critical readers, more information about the ‘growing number’ of our ‘much ballyhooed’ Kyivan Psychoanalysis Study Group can be found here. Previous dreams involved cantoring scenes with relation to the Latin Church, evangelical missionaries, and the Anglican realignment. All of them, like this one, involve my Protestant past. 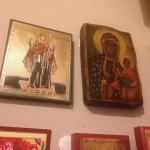 November 30, 2018
'Mary, what are you thinking about?': on the Oranta of Kyiv and the Theotokos of Belz-Częstochowa (St Philip's Fast #3)
Next Post 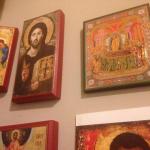 December 1, 2018 'Break your détente with death': on Sinai Pantocrator and the Dormition (St Philip's Fast #4)
Recent Comments
0 | Leave a Comment
"I can't believe you would consider the theological lightweight Kilby as a proper critique of ..."
antoniodec Fiat mihi secundum verbum tuum: on ..."
""Milbank criticizes Balthasar for being apolitical in his aesthetic reflections, and I can see how ..."
antoniodec Reading Sobrino on Óscar Romero and ..."
"the word is receptive, which has nothing passive about it but could be the most ..."
antoniodec Fiat mihi secundum verbum tuum: on ..."
"One can never "go home," not in this life."
billwald I’ve found my way home: on ..."
Browse Our Archives
Related posts from Eastern Catholic Person