Patheos Explore the world's faith through different perspectives on religion and spirituality! Patheos has the views of the prevalent religions and spiritualities of the world.
The thing I remember about the beginning of this dream was that it was a rehearsal, but not for a service in an Eastern Catholic setting. I was back at the Anglican parish where I was first discerning a call to ordained ministry (it didn’t work out). I was being given instructions on what I should do in this service. I understood from the instructions that it was for the ordination of a bishop, which made no sense because the rector of the parish where I did my internship is now already a bishop in the Anglican realignment. In fact, he became a bishop shortly after I got off the ordination track.

The instructions I received were very weird. Before the service, as things were being prepared, I was supposed to lead a kind of quiet prayer, maybe even silent. I was not really sure how to lead a silent prayer, but I acquiesced nonetheless. I am, at the end of the day, an ecclesial company man. The weirdest part is that they knew, and I knew, that I was now Eastern Catholic, which is why they gave me that part. It was the only thing they thought I could do now.

The next scene is even stranger. We enter the sanctuary for the ordination, but it is not a sanctuary. It is more like a hipster coffee bar, with picnic tables and benches. I don’t think much of it in the dream, but in hindsight, it had the feeling of the ideal kind of hipster evangelical sanctuary: cozy, intimate, gentrified. At the table, I see one of my friends whose dad had been a kind of father figure to me in bridging my work between the academy and the church during graduate school. We don’t really speak of his dad, though, as we prepare for the service. Others gather at the table; they are recognizably Asian American evangelicals.

The bishop’s son – himself an Anglican priest now – motions for me to get ready to do my part. I am supposed to stand right in front of the bar, which looks more like an alcohol bar than a coffee bar. There is a big wooden cross jutting out from the top of the bar window. It is not a crucifix; these are Anglicans. I am supposed to stand there and lead the silent prayer.

A friend of mine who goes to the Eastern Catholic temple is sitting there on a barstool. I make a mental note in my head that this is the same guy whom my spiritual father has assigned to be silent during liturgy in order to reflect on his life in prayer. He has been silent for quite some time, and the effects have been beautiful and edifying both for him and for us. In fact, he is often the life of our temple’s coffee hour.

But there he is, and I am not really sure what he is doing there. He winks at me as I get started. I have no idea what I am doing, so I go into Byzantine cantor mode. What comes out of my mouth is the Usual Beginning, the opening prayers to any service that includes the Prayer to the Holy Spirit, the Prayer to the Trinity, and the Our Father. It is loud, not silent. I hope that I am not being a distraction. I realize that this is the kind of thing I’d do at my home temple during the proskimedia, the liturgy of preparation that is part of the Divine Liturgy and happens behind the icons. The clergy prepare, and the lay people begin in worship by chanting third or sixth hour, depending on what time Divine Liturgy is on Sundays. The usual beginning opens those services too.

As the Our Father ends, I automatically go into, For the kingdom and the power and the glory are yours, Father, Son, and Holy Spirit, both now and ever and for ages of ages, amen. That is a disaster, I realize as soon as I’ve said it. These are the priest’s answers to the lay people, not something a lay cantor like me should be doing, especially one as unofficial as me. The story of how I started the leading the singing at liturgy is complicated. It was a process marked with reluctance for me, as I have attempted to foreswear any positions of ecclesial leadership ever since I worked at that Anglican parish – the very one for which I was dreaming about leading preparation prayers.

Too late, though, I think to myself. The readers’ version of the Usual Beginning usually has it that the lay person can substitute the presbyteral part with, Through the prayers of our holy mothers and fathers, Lord Jesus Christ our God, have mercy on us, amen. Actually, I added the part about the mothers. I am a feminist.

After that, the lay person can repeat Lord, have mercy twelve times. I began doing my favourite rendition of this, the Greek chant that can be repeated in sets of threes in each of the major Orthodox languages: English, Greek, Church Slavonic, and Arabic. Suddenly, I hear my friend who is supposed to sworn to liturgical silence hold an ison for me, a consistent bass note that provides a kind of harmonic foundation for Greek chant. Emboldened, I get louder and I hope I won’t be stopped. Also, I am making up for accidentally stepping over the line on the presbyteral parts.

I crescendo from the English Lord, have mercy, to the Greek Kyrie eleison, to the Ukrainian Hospody pomylui (my modification – with #sorrynotsorry apologies to my Orthodox friends, especially those against Ukrainian autocephaly), and then right into the Arabic Ya rab irham. It becomes a kind of sonic boom that stuns the Asian American hipster evangelicals into an awed silence.

Suddenly, at that last part, it’s so loud that I hear myself as if in another world singing Ya rab irham parallel to it. My body jerks up, and I discover that I am in bed. It was all a dream.

In the public words of one of my more regular but very critical readers, more information about the ‘growing number’ of our ‘much ballyhooed’ Kyivan Psychoanalysis Study Group can be found here. Previous cantoring dreams can be found here and here. Both, like this one, involve my Protestant past. 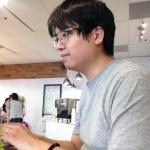 September 5, 2018 Blogging as hysteric confession ('I give you three years to narrate yourself' #1)
Recent Comments
0 | Leave a Comment
"I can't believe you would consider the theological lightweight Kilby as a proper critique of ..."
antoniodec Fiat mihi secundum verbum tuum: on ..."
""Milbank criticizes Balthasar for being apolitical in his aesthetic reflections, and I can see how ..."
antoniodec Reading Sobrino on Óscar Romero and ..."
"the word is receptive, which has nothing passive about it but could be the most ..."
antoniodec Fiat mihi secundum verbum tuum: on ..."
"One can never "go home," not in this life."
billwald I’ve found my way home: on ..."
Browse Our Archives
Related posts from Eastern Catholic Person