Patheos Explore the world's faith through different perspectives on religion and spirituality! Patheos has the views of the prevalent religions and spiritualities of the world.
I have seen on some corners of the Internet that conservative folks are supposedly having a public meltdown about Ariana Grande’s ‘God Is a Woman.’ I suppose that ‘freaking out about a pop song’ showcases the shallowness of the movement that arguably gave us the Trump Administration and its incompetent fascism, but I must admit that I find myself disappointed by how tepid the flagship institutions of the so-called ‘Religious Right’ is taking Ariana’s latest. One avenue of analysis might be that the multitudinous tweets and copious social media posts suggest that the ideology is working even without the institutional support. In this reading, the Religious Right appears to have won, having so thoroughly wormed its way into the minds of its adherents that the organizations do not even need to issue statements any more about how it’s blasphemy to declare that the God who is supposed to be Father, Son, and Holy Spirit. Of course, one could retort that the actual reason for their silence was that they had given so much ground when The Shack came out with its portrayal of two members of the Trinity as women of color. But with their leaders in absentia, it could be said that the Facebook faithful are not going down without a fight.

But the absence of Religious Right power figures coming out to condemn ‘God Is a Woman’ should at least feel noteworthy for those of us who have followed the culture wars of the 1980s and 1990s. Gone are the days when no less an institution than the Vatican came out in protest against Madonna going down on St Martin de Porres in the ‘Like a Prayer‘ music video. It is now a matter of history when Focus on the Family’s reading of Britney Spears’s Catholic school bop ‘Baby One More Time’ would resemble an evangelical Bible study hermeneutic: first define the meaning of the key term in its original language (‘hit me, baby’ is, as Plugged In magazine has it, ‘street slang for sex’) and then thread that word study through the entire text (‘show me how you wanna do me’ might be evidence that this reading works).

There are many possible explanations for the institutional Religious Right’s contemporary lethargy. The first of my conjectures is that Britney, as well as those in her teen pop cohort like Jessica Simpson, really knew how to screw with the discourse. Britney, for example, was ‘not that innocent’ but was saving sex for marriage, and Jessica, whose boots were made for walking, was a pastor’s daughter before she was the updated Daisy Duke. But the second speculation is probably closer to the truth, at least psychoanalytically. Once upon a time, the Religious Right was the engine driving the condemnation of Bill Clinton’s not having had sexual relations with Monica Lewinsky depending on what the word is is. Now, they seem to be copping at least in practice to the cognitive dissonance of giving their political support to a reality television star whose infamous tagline is ‘grab em by the pussy,’ whose ties to Russia is crystallized in the popular imagination by a videotape of Russian prostitutes peeing on him, whose current scandal revolves around the payment of pornographic actresses for having slept with them, and who took a picture with Jerry Falwell Jr next to a cover of Playboy magazine. Maybe their followers, apparently led in some part by Ben Shapiro (whose initials give the lie to his adolescent prep school confidence), are slower than their leaders in grasping the irony of the situation. The Religious Right is no longer in the business of fighting blasphemy and lewdness in popular culture. Having taken upon itself the face of its enemies on MTV, it is itself the blasphemous lewd factor in contemporary publicity.

By contrast, Ariana knows exactly what is going on. Madonna, the goddess whose coffeetable book Sex scandalized many a conservative in 1992 with its frank portrayal of a spectrum of sexual fantasies, has won. Having once been rehabilitated from her ‘wild days and mad existence’ through her portrayal of Evita Perón, she has now been catapulted by Ariana to the heights. In the music video for ‘God Is a Woman,’ Madonna is the voice of the god who is a woman, feminizing the immortal Samuel L. Jackson monologue from the 1994 hit Tarantino film Pulp Fiction as Grande swings a hammer: And I will strike down upon thee with great vengeance and furious anger those who attempt to poison and destroy my sisters, and you will know my name is the Lord when I lay my vengeance upon you. Indeed, references abound to the heyday of the culture wars from the 1980s to the 1990s, including the shrieks of the beaver, or the groundhog, or the gopher, or whatever random rodent who has come up from the ground, beheld its feminine divinity, and survived till the end of a Bill Murray film, whether it is Caddyshack, where the gophers on the golf course bear witness to the fact that all men are fools and just exist to get laid, or Groundhog Day, where Murray wakes up to the same day until his fear of the feminine erotic is transformed into his embrace of it. ‘God Is a Woman’ is Ariana’s declaration of victory in the battles for pop culture, the vindication of Madonna’s antics in the 1990s. The fear of God has been put into the Religious Right, and Ariana Grande has given its theology the most concise articulation possible: she is a woman.

The conservative path to chastity, which is to repress it with invented tradition, has failed. But to mistake ‘God Is a Woman’ as a call to lasciviousness cannot be justified by the song. The address is to ‘my one’; it is an exclusive relationship. She emphasizes slow movement and mutual enjoyment, turning any kind of patriarchal sexual violence into a theological violation. This is a song of the #MeToo moment, a dancing on the vocational graves of the male predators. Rape and conservative sexual control are but two sides of the same coin, both revealed to be unchaste in their execution because the fear of sex only leads to personal fragility. If the erotic power unleashed by the emergence of global capitalism is irrepressible, then Ariana’s song can be heard as a call to come out of the extended adolescence of the culture wars and to integrate our sexuality in ourselves as embodied persons instead of repressing it and becoming alienated from its potency.

One can hear, then, protests from both Left and Right at this prescription. Radicals may deplore my reading as an acceptance of a global capitalist status quo via a commodified text, while conservatives might condemn my account of their repression as ultimately unchaste. Here, finally, is where the protests of social media against the theology of God as a woman can be answered. In a moment of excruciating ecstasy, the English visionary Dame Julian of Norwich saw a series of visions, and in meditation over them during a long lifetime, she came to the conclusion that the God she saw was a woman from whose breasts we are nourished and whose sovereign ownership of the world as a field in which the pearl of great price is buried was not a statement of patriarchy, but feminine sovereignty. It is in the context of these insights that she says her famous line that all shall be well, all shall be well, all manner of things shall be well – or in Ariana’s words, ‘We’re gonna be alright.’ This ecstatic revelation suggests that the ideological attempts to change the world by human technologies of governance are destined to be revealed as engines of ideological repression, patriarchal Promethean machines that enslave their users unknowingly. ‘God Is a Woman’ is one way to formulate the theology for the erotic opposition to such social engineering. Eros, especially in its contemporary forcefulness, demands integration.

The scenes of the music video suggest settings on the sands of the beach, the ruins of civilization, and a space-eye view of the globe. With her own body, Ariana Grande dances on these material holdovers from the Religious Right, reshaped curiously as feminine genitalia. The game is up, she says. Madonna has broken free, stronger than she ever was before. If the culture wars are still around, they are but artifacts of an invented conservative past, still strewn across the landscape but distant memories of their glory days. She concludes with a feminization of Michelangelo’s Creation: When all is said and done, you’ll believe God is a woman.

I want to thank my sisters Eugenia Geisel and Grace Yu for teaching me all that I know about the psychoanalysis of popular culture. 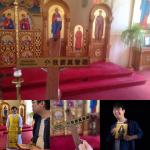 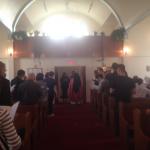 Catholic
On the perversion of the eucharistic body: the...
Eastern Catholic Person
TRENDING AT PATHEOS Catholic