The meat of Pascha: theological commentary on the resurrection

Pascha, I often joke, is the first day after the Great Fast and Great and Holy Week that we who are Orthodox can eat meat without guilt. Some, of course, do so through the season shamelessly, so it is their cameras that take the break, with no pictures of meat appearing on their social media the entire Fast. Then, on Pascha, the baskets are blessed, and there they are, the day when meat re-appears on Facebook and Instagram.

Some may take me to task for advocating hypocrisy, but I’d say that this tradition, which will sound to evangelicals as the going-through-the-motions problem of the liturgical traditions, is better than what I got at Easter in evangelicalism. I certainly did not mind the postponing of English-language services at the Chinese churches of my youth till after a noontime potluck, but the sermons for that day, often directed as apologetics for newcomers who were seduced by the free food, generally waxed a-theological. Whether overusing C.S. Lewis’s dictum from the beginning of Mere Christianity that Jesus was either a liar, lunatic, or Lord or the recycled defences of the scientific evidence for the bodily resurrection of Jesus Christ from Who Moved the Stone in The Case for Christ, they would invariably be about trying to convince the congregation of what they know already – that Jesus Christ is risen from the dead – with very little theological commentary about why it matters.

Some may say that I am flirting with liberalism here in downplaying the importance of emphasizing the resurrection’s historicity. As it turns out, that was the official justification for the Anglican Network in Canada’s secession from the Diocese of New Westminster despite everybody knowing that the real issue was sexuality and that the truest reason was a disagreement over the meaning of Chineseness (as I argued in a journal issue of Ching Feng) and in spite of it being very difficult to find on the public record that the bishop ever denied the resurrection when he sought to comment on its spiritual implications. As I once told Timothy Radcliffe OP when he visited Seattle during the time I once lived there, evangelicals themselves are not themselves innocent of spiritualizing the resurrection. God’s not dead, he’s surely alive, he’s living on the inside, roaring like a lion, sing the Newsboys (those adopted Australian grandchildren of the late Vestal Goodman) for a film named for the first three words of that chorus. That’s Schleiermacher, said I to Radcliffe. The former Master of the Dominicans leapt up in excitement, ran to get a pen, and wrote it down so that he could use the reference in a talk that night.

That we eat meat at Pascha, and that even our monastics do not fast all through Bright Week, is the theological commentary on the resurrection that I have long longed for on this day. It is not only that Jesus ate with his disciples when he appeared to them — it is from these episodes that we Orthodox tend to remind the Latins that fish is a feast food, not a fasting delicacy, while of course our people, and not just the uniates among us, eat it openly during the Fast — but also that the Bridegroom, who was taken away from us in the events of his Passion, has suddenly returned to us, and now again we cannot fast. We eat joyfully, even my spiritual father, who keeps a monastic fast but allows himself delicacies like frog fallopian tube Chinese desserts (he clarifies that it is the fat around the fallopian tubes that is in the soup) and the fatty pork that Mao loved to eat because it made him feel like a man. It is a feast with our families, as those who took me in as I am away from my family in Vancouver have shown me year after year. This year, they participated in an intra-family sausage smoking competition (Mama Hayda, the matriarch of our team, won), and to wit, they smoked their own ham and bacon too. I only heard about it after the fact; my favourite part about tagging along with my mission siblings is that they let me come along for the eating part, after I even missed all their services since I was away at a conference. St John Chrysostom encourages in his paschal homily even those who arrive at the eleventh hour and have done no work to participate in the feast. I know what I am doing, and am doing it anyway, even holding a basket of blessed food that doesn’t belong to me for Pascha pictures that I have used in my social media (thanks, Summer, dear sister).

The theological commentary is scandalously joyous, even perversely so. It is that I, who least expected Pascha to just come rolling around after a Great Fast spent in death-of-God catechesis, find myself suddenly overtaken by the surprise of the resurrection. Every year, it is sudden, but this time, it has been very much so, jolting me into a new period of mystagogy. As we stood by the grave of Fr Myron Panchuk, who died at the beginning of this year’s Fast and started my reflections, we sang Christos voskres to him and his brother priests Frs Pavlo Hayda no Tom Glynn buried there at what I now take to be ground zero of our Kyivan Psychoanalysis Study Group, and I reflect that in the hope of their resurrection from those graves, the real death-and-resurrection story here is not that they have gone before us, but that we are now brothers in the resurrection. We are family feasting together because our ancestors who have fallen asleep now show themselves to be sisters and brothers, no longer of the order of the parental superego but of a community linked together by the reality of our mortality and the hope of the resurrection. This theological sensibility begins with the risen Christ, whom the Holy Apostle Paul calls our eldest brother in the rising from the dead. Even the Lord is our brother, the one with whom we freely feast; how much more our bodily mothers and fathers?

The meat of Pascha, and the free-flowing wine and spirits of this day, present us with the flesh of the resurrection, that the spiritual pervades the material and that therefore what is problematic about both the liberal and evangelical views of Easter is their sundering of the worlds of spirits and bodies. The mystagogy of the resurrection is to find that the supernatural is not above us, but among us. Overcome with paschal joy, we eat, drink, party, and post again on social media.

Χριστὸς ἀνέστη ἐκ νεκρῶν, θανάτῳ θάνατον πατήσας, καὶ τοῖς ἐν τοῖς μνήμασι, ζωὴν χαρισάμενος! 基督已經從死裡復活，他的死勝過死亡，把生命賜給已埋葬在墓中的人。Christ is risen from the dead, trampling down death by death, and to those in the tombs bestowing life.

April 27, 2019
The death of the son: for Great and Holy Saturday
Next Post 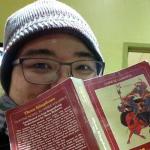 May 10, 2019 I'm flattered to be named an Asian American theologian
Recent Comments
0 | Leave a Comment
"I can't believe you would consider the theological lightweight Kilby as a proper critique of ..."
antoniodec Fiat mihi secundum verbum tuum: on ..."
""Milbank criticizes Balthasar for being apolitical in his aesthetic reflections, and I can see how ..."
antoniodec Reading Sobrino on Óscar Romero and ..."
"the word is receptive, which has nothing passive about it but could be the most ..."
antoniodec Fiat mihi secundum verbum tuum: on ..."
"One can never "go home," not in this life."
billwald I’ve found my way home: on ..."
Browse Our Archives
Related posts from Eastern Catholic Person

The "Ascension of Isaiah" and the Martyrdom of...
Background: According to tradition, the Apostle Peter eventually came to the...
view all Catholic blogs
What Are Your Thoughts?leave a comment
Copyright 2008-2021, Patheos. All rights reserved.
Close Ad