The Dance of the Cross and the Crescent: Egregious Twaddle on Pilgrimage

The Dance of the Cross and the Crescent: Egregious Twaddle on Pilgrimage September 13, 2012 Joanne McPortland

Our bags are . . . well, not actually packed yet, but close. We’re . . . well, not exactly ready to go, but with a flurry of last minute chores (sync the iPad, stock up on protein bars, don’t forget the European plug adapters) we’ll be leaving on a jet plane tomorrow afternoon, after Mass at the Cathedral of St Peter in Chains in Cincinnati. 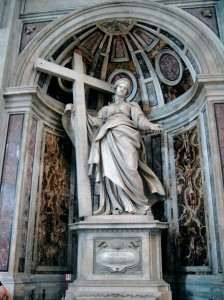 Tomorrow, of course, is the Feast of the Exaltation of the Holy Cross, and there could hardly be a better day to set off on pilgrimage. It was as a pilgrim (and an amateur archaeologist, which endears her to my heart) that Constantine’s mother, Helena, traveled to the Holy Land and led the expedition that, according to tradition, unearthed the remains of the True Cross. Fragments of that cross, like the endlessly proliferating relics of other holy objects and later of holy people, have drawn the veneration (and, unapologetically, the tourist drachmas and dollars) of pilgrims ever since. This is not me being cynical. Pilgrimages have always served many important needs, and the support of the local economy is one of them.

Taking up our pilgrim badges on Holy Cross Day is a reminder of another kind of pilgrimage, one with a darker and more complicated history. It was ostensibly to protect Christian pilgrims to the Holy Land from harassment by Jerusalem’s Muslim rulers that the first Europeans “took up the cross” and became, literally, crusaders. I say ostensibly because this is not the first week in the history of the world that religious conflicts have been exploited for earthly politics. But more on that later.

First, for those of you plotting our pilgrimage with pins on maps, here’s the general itinerary—subject, of course, to the whims of the world and the wind of the Spirit:

There will be more detail on each of these stops as we make them, and as my ability to master the limitations of blogging from the road allows. (I’m already needing to apologize for my inability to supply diacritical marks.) But there’s one striking feature to this trip, one that comes into even sharper focus this week with the anniversary of the 9-11 attacks and the ensuing (and possibly connected) acts of violence and unrest in Egypt, Libya, Tunisia, and Yemen. If you know any medieval history at all, you will recognize that our pilgrim path lies almost entirely within a part of Europe where Judaism, Christianity, and Islam were long engaged in a complicated dance of cultural flowering and conquest, tolerance and torture. The events that occurred in that part of the world, the currents set in motion there, echo and re-echo in today’s headlines.

I have written before about my fascination with the pagan (Celt, Iberian, Roman) and Islamic threads that weave through the great Marian apparition sites, and it has always been my intention to explore those more deeply on this journey. But in light of this week, it seems more important than ever to look to Mary (Queen of Heaven, Jewish woman of faith, Mother of Christ, honored by name more often in the Holy Qur’an than in the New Testament) and what she is saying to us today, here and now, about how we are to live the dance of the cross and the crescent.

This is where I part company, respectfully, with many of my sister and brother Catholics, including lots of my blog family at the Patheos Catholic Channel—and maybe where I part company with you, too, though I hope not. I have nothing but deep respect for Islam as I understand it, and for those I know who practice it. I refuse to call Muslims by the sneering Fox News epithet Islamists, as I refuse to call Jews Yids or Catholics papists. I know Allah to be one of the infinite number of God’s names, no less than Yahweh or Abba, and not a demon. I accord Muhammad (peace be upon him) the same respect I do to any faith’s prophets and founders, and I do not take it upon myself to tell Muslims what their sacred scriptures mean.

Free speech, and calling a sin a sin, is of high value, as Rebecca Cusey argues passionately. But we have to be clear that deploring hate speech and repairing the damage it does is also an obligation, one that Jesus laid on his followers in Matthew 5:21-26. The Vatican, in repeating this message yesterday, was not being soft on terrorists, as some Catholic writers implied. It was modeling the witness we are called to, most especially in times when we have been assaulted.

There was a time (as brief and shining as Camelot) when the land to which we are traveling tomorrow, extending across the Iberian peninsula and northward over the Pyrenees into southern France, was a country of peace, religious tolerance, diversity in truth and not only in lip service, and rare equality of women—a land of poetry and song, of gardens and tiled terraces, of education and medicine and science, of commerce and prosperity. Its North African rulers, Muslims known as Moors, called this land al-Andalus, and Jews and Christians lived and flourished there, too, with freedom of religion (though they were taxed at a higher rate). It didn’t last, because empires shift and politics and money and power have their way.

My Church takes credit for the destruction of that fairytale kingdom, with Their Catholic Majesties Ferdinand and Isabella setting aside their traditional provincial wars to unite Spain, under the banner of St James (known in Spanish as Santiago Matamoros, St James the Moor-Killer), in what is celebrated as the Reconquest. In 1492, the year Isabella helped Columbus sail the ocean blue, the last of the Moors were expelled from the Iberian peninsula. The Jews were given the boot along with them, and any that remained and refused conversion to Christianity (or relapsed after it) were tortured and executed by the Spanish Inquisition—which, Monty Python aside, is not all that unexpected a pattern in human history. Like Muslims today reacting to the events of this week in Libya, claiming my faith means acknowledging that terrible things have been done in its name, but the terrible things are not my faith. This post by Patheos Muslim Channel blogger Nancy Shehata says that best. Read it, even if you stop reading me here.

The culture of al-Andalus remains, in the architecture and gardens of Spain and in the language itself, which cannot rid itself of Allah. And Mary remains, and returns again and again, under Arabic titles, in a town named for Muhammad’s daughter Fatimah, by springs and wells and trees holy to the first peoples of the place. She is trying to tell us something, and unless we listen with ears that hear all the songs of the soul in that part of the world I am not sure we will hear it correctly.

I don’t go on this pilgrimage to glorify any one side of this tangled dance, but to glorify God, and to seek an understanding heart. Let us leave our prejudices and our rage and our politics at home, and carry only peace—la paz, shalom, salaam. Soon enough we will be back to our real lives and the headlines and the consequences of our brokenness. Al-Mu’tamid (d. 1085), the poet and Muslim ruler of Seville sent into banishment by  Catholic forces, wrote about that brokenness this way:

All things come to an end,
Even death itself dies the death of things.
Destiny is chameleon-colored,
Its very essence is transformation.
In its hands we are like a game of chess,
And the king may be lost for the sake of a pawn.
So shake off the world, and find repose . . .

Let’s go find repose and listen to Mary, in whose banner the cross and the crescent moon combine. God willing—or, as even the Catholics say in Spain, Ojala (“O Allah”)—we will hear and share her message of peace and healing with this broken world.

September 12, 2012
'Who Would True Valor See': Egregious Twaddle Goes on Pilgrimage
Next Post

September 15, 2012 Hollowed Be Our Aim: Egregious Twaddle on Pilgrimage
Recent Comments
0 | Leave a Comment
Browse Our Archives
get the latest from
Catholic
Sign up for our newsletter
POPULAR AT PATHEOS Catholic
1