“The whole earth is our hospital”: Good Friday in Painting and Poetry

“The whole earth is our hospital”: Good Friday in Painting and Poetry March 29, 2013 Joanne McPortland

Some reflections on the Passion in art and poetry, from last year’s Good Friday post.

I find myself longing for the respectful quiet of the earlier Good Fridays in my life. I know that Church and State were, if anything, even more clearly separated when I was a child, but in the Catholic (with occasional threads of Bulgarian Orthodoxy) ghetto of our little neighborhood on the seamy side of Hollywood, you wouldn’t have known it. The TV, the radio were shut off for the day. We could play, but quietly, and not between noon and 3, the Tre Ore when Jesus hung on the Cross for us. We didn’t spend that time in church, like some Catholics did, but we sat quietly and thought about the meaning of the day. And we always noted that, no matter how the day began, clouds rolled in and the sky darkened for those terrible hours.

Today, there seems to be no escape from the world, the flesh, and the devil, not even during the holiest of hours for the country’s religious majority. But that is as it always has been, I guess. The poet W H Auden, in “Musee des Beaux Arts,” steers our Good Friday eyes to painters like Brueghel, who recognized that the Crucifixion happens in the midst of our dailiness, not apart in some quiet corner:

About suffering they were never wrong,
The Old Masters; how well they understood
Its human position; how it takes place
While someone else is eating or opening a window or just walking dully along;
How, when the aged are reverently, passionately waiting
For the miraculous birth, there always must be
Children who did not specially want it to happen, skating
On a pond at the edge of the wood:
They never forgot
That even the dreadful martyrdom must run its course
Anyhow in a corner, some untidy spot
Where the dogs go on with their doggy life and the torturer’s horse
Scratches its innocent behind on a tree . . .

Art and poetry are, for me, a way to climb inside the meaning of this day. And though I respect the traditions—from the Spanish Gothic to The Passion of the Christ—that emphasize the pain and the blood of the Crucifixion, and know that many find these deeply prayerful, I have always been drawn to the cooler but no less moving poets and painters. Andrea Mantegna’s The Lamentation Over the Dead Christ, for example, speaks loudest to me of the horrible humanity of the death of the Son of God, perhaps because I was struck to the heart, standing at the foot of my father’s deathbed, at the similarity of the body marked by suffering even at rest.

Caravaggio’s Entombment of Christ is another silent symphony of grief. The way the figures wheel forward in a descending arc toward the sharp finality of the stone slab, around the fulcrum that is the stunted Nicodemus, almost hurts to look at. It is beautiful and terrible at the same time—like this day. Nicodemus makes eye contact with us, his battered features numb with guilt and loss, as if to say, “We did this, you and I. All of us. We’re in this together.” Below the stone, a green plant springs up in hope.

Rogier van der Weyden’s Descent from the Cross is more polished and distant, more gorgeous in its color and pattern, but no less a meditation on the way we incarnate grief in our bodies. This was the first northern European painting to depict what is known in Italy as the spasimo, the swoon of Mary. Supported by St John and by the other two Marys—Mary of Cleopas and Mary Salome, whom medieval legend calls the Virgin’s half-sisters—she faints from grief. Her posture is echoed at the other side of the composition by the standing swoon of Mary Magadalene, whose right arm is bent upward at a painful angle in order to fit within the grouping’s shallow plane. Joseph of Arimathea (in red) and Nicodemus (in sumptuous cloth of gold) support the body of Jesus. A servant clutching three nails of the Passion (I think he might actually be intended to suggest an angel) descends the ladder from the cross—which is T-shaped to suggest a crossbow, because it was the crossbowman’s league that commissioned the altarpiece—while another stands next to Mary Magdalene, holding the alabaster jar of ointment that is her attribute. The diagonal line of hands from Christ’s curved left hand to Mary’s curved right hand is an arrow that points from the cross to the skull of Adam, a kind of close-parentheses on the power of sin. Every detail, from John’s eyes red-rimmed with weeping to the jewel-like tears of Mary of Cleophas, speaks sorrow.

There are a thousand other ways to escape into art today, but the world goes on. So, terribly, does the Crucifixion. In war-torn Syria and Afghanistan and the Central African Republic, in the ever-embattled Holy Land, on the drug-and-gang-ridden streets of Mexico and our own cities, under drones and under fire, mothers swoon over the bodies of their dead children. In Uganda, mobs cry for the blood of homosexual persons. In darkened clinic rooms, life is snuffed out legally. We want to turn away from Nicodemus’s accusing eyes, from the sculpted tears and the wounds and the keening. We want to go about our business, go on like dogs with our doggy lives, anesthetize ourselves with gossip and fashion and Martha Stewart’s recipes for perfect Easter brunches.

But we look away at our peril. To turn from this death is to condemn ourselves to terminal sickness of the soul. In Part IV of “East Coker,” one of the Four Quartets, T S Eliot says it best. With health care imagery chillingly appropriate in our age, and with a complete absence of morning-show chirpiness, Eliot tells us the real reason this is a good Friday:

The wounded surgeon plies the steel

That questions the distempered part;
Beneath the bleeding hands we feel
The sharp compassion of the healer’s art
Resolving the enigma of the fever chart.
Our only health is the disease
If we obey the dying nurse
Whose constant care is not to please
But to remind of our, and Adam’s curse,
And that, to be restored, our sickness must grow worse.
The whole earth is our hospital
Endowed by the ruined millionaire,
Wherein, if we do well, we shall
Die of the absolute paternal care
That will not leave us, but prevents us everywhere.
The chill ascends from feet to knees,
The fever sings in mental wires.
If to be warmed, then I must freeze
And quake in frigid purgatorial fires
Of which the flame is roses, and the smoke is briars.
The dripping blood our only drink,
The bloody flesh our only food:
In spite of which we like to think
That we are sound, substantial flesh and blood—
Again, in spite of that, we call this Friday good. 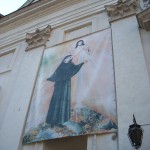 April 6, 2013 Oh, Mercy, Mercy Me, Still
Recent Comments
0 | Leave a Comment
Browse Our Archives
get the latest from
Catholic
Sign up for our newsletter
POPULAR AT PATHEOS Catholic
1