Heading to an Iceberg- Avoiding Being on RMS Titanic 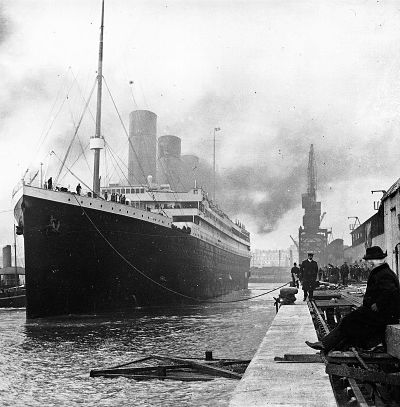 The year is steaming toward April 14 and 15 . . . one hundred and four years ago the good ship RMS Titanic hit an iceberg in the Atlantic and on this date many of the passengers had days to live. When the ship hit the iceberg many people behaved like heroes and some like cowards, but it would be better not to have been on the ship at all.

Find out how you could have avoided being on RMS Titanic: never put your family and your safety in the hands of corner cutting and hapless leadership. How can you avoid this mistake?

Avoid doing business with a company that cuts corners on the main task in favor of treats and gadgets.

The White Star Line ran very luxurious liners and actually installed more lifeboats than the law required (more on that later), but luxury trumped security. If the lifeboats would block the passengers’ view on deck, the lifeboats had to go. Recall: you were on a transatlantic voyage to get across the Atlantic. Comfort is good, but safety is better. Make sure that you check out your local government or private school and see where the money is going. Are you paying for a bloated administration or teachers? Do the same with college. Does the school have great treats, but relies on part-time faculty that are underpaid?

Does the money at the restaurant go to paying those who make the food or those who market the food? You aren’t eating the marketing. Generally, a well paid worker will give you better service and care more about health and cleanliness. He or she will not want to lose his or her jobs.

Avoid any business with an out of touch leadership concerned more about the “show” than the job.

Never put your life in the hands of a man like Bruce Ismay. He will get on a lifeboat and leave you to die. Companies exist to make a profit, but in a good society they exist to do so ethically. Free market transactions are win/win: I get to cross the Atlantic (win!) and the White Star Line gets my money (win!). The free market fails when one side or the other tries to cheat: the stowaway (bad!) tries to cheat, but so does the company who cuts corners on steel quality (bad!).

Take a look at the place where your money is going and ask: is this an ethical concern? One way to know is to check what the the company stresses or spends time or money on. Does the ship (company) have a beautiful stairway, but water tight doors that don’t go all the way to the top? Pick a company that might cut corners on the wrapping, but makes a good product.

Check out how the company or ministry has handled a past crisis.

Nobody can avoid a crisis. The White Star Line made critical errors, but it also faced the “slings and arrows of outrageous fortune.” Their response was bad. You should not send bills for the missing uniforms to the families of the band members who died bravely playing on the deck of your sinking ship. You should apologize. You should pay compensation.

Take a look at the company where you are buying your car. How did they handle their last error? Look at your church or ministry leadership. Is there high turnover? Do good people stay or go? When there is a “disaster” does the corporation tend to honesty and disclosure or cover up?

Bad things will happen to us all, but beware investing in a group that deals badly with the bad things that come.

Is the sale done honestly?

Yesterday we visited a timeshare presentation. It was awesome and we were nearly sold until Hope suggested we Google the company. We discovered they would not do what they claimed they would do and so took a walk. The presentation was full of “stretchers.”

My own area of education will often sell the sizzle and not the steak: add ons and not education. When it comes to education, a bad school will point to the Nobel prize winning teacher on campus, but not mention that no undergraduate gets her for class. If you are sold on full time professors, don’t settle for part-time (adjunct). Online is particularly nefarious. Google the program and get beyond the first page of ads and find out what students and alum think of the product.

How are you sold? If they are selling something (safety!), they do not deliver (too few lifeboats) beware.

There is room for some government accountability or outside accreditation.

Finally, there is a good reason that Republicans like Theodore Roosevelt and William Howard Taft saw a role for government in helping us avoid the White Star Line. The buyer should beware, but in a big and complicated company like the White Star Line, what can the average person do? Information is hard to get. In other cases, the company has a functional monopoly on a task common folk have to do. If we want to get across the Atlantic and nobody has enough lifeboats, what are we supposed to do?

That is why extreme libertarianism is a bad idea. The market (or icebergs) will correct a problem, but meantime thousands of people die. Government will always be an imperfect check on big business, but can do some good at very basic levels. If the Navy keeps the sea safe from pirates and a private company benefits from that work, then the company can expect some regulation.

We have not had an iceberg disaster like Titanic since government oversight of the sea lanes and regulations began. This is a victory.

At the same time, state regulations tend to “credentials” and credentials are nearly useless in a crisis. Too much government credentialing did not keep the passengers of a Mediterranean cruise ship  safe from drunken and vice ridden leadership. Government that gets too big becomes cozy with big business and then oversight fails.

No matter what you do, sometime you will find you invested in the White Star Line. Panic doesn’t help so tomorrow we will talk about what to do.

April 11, 2016
Head and Heart: Blend Both and then Use Your Hands to Act
Next Post

April 13, 2016 Be Calm, But Don't Carry On: Three Rules for the Gentleperson on the RMS Titanic of Life
Browse Our Archives
get the latest from
Eidos
Sign up for our newsletter
POPULAR AT PATHEOS Evangelical
1

Four Tips for Reading the Book...
Crux Sola: Formed by Scripture to Live like Christ
Books by This Author John Mark Reynolds