Accepting the Ending (The Tempest) 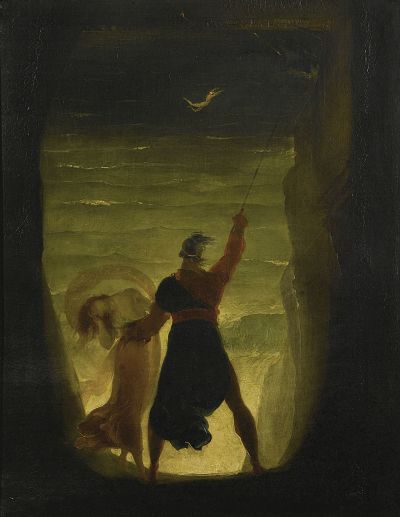 We aren’t very good at accepting “endings” as fans and cry for a sequel, reboot, or continuing adventures for our favorite stories. Sometimes this works well, but usually not so much. “The End” used to appear in films and perhaps it was better so.

My dad told me that at camp meeting the time would come when the sweet fellowship had to come to a conclusion. Normal life was bringing the revival to a close and one good man would say: “All good things . . .” and then that good time would end.

If Shakespeare lived today, the pressure would be intense for Hamlet II. Like Walt Disney who would do sequels on less serious characters (Davy Crockett), though never Snow White, Shakespeare would give us the audience more Falstaff (Merry Wives), but not more Hamlet. He knew when he had given us a good ending.

Why? His goal, like Walt’s, was to please his audiences. Like Walt, he worked with a team and was never a solitary genius. But even more than Walt, Shakespeare had a moral line he would not cross. He knew toward the end that his gift was failing and it made him sad. He wanted his audience to set him free . . . and it appears they did. He coveted their prayers, got them, and ended his life as a prosperous man fit to be buried in his church. He died at 52  having done more for the English language than any one man not named Cranmer and more than any group of men except for those involved in the King James Bible.

Shakespeare was a young poet . . . steeped in the traditional eroticism of his time. He became a young playwright willing to sacrifice some truth to make a dollar. He died in the youth of old age (my age!) content. He let his “magic” go and ended a faithful son of the Anglican church he served so well with his words. Writing gave him the “dukedom” (social respectability) he sought. He was blessed enough to be honored in his day, but not lionized. Shakespeare would become SHAKESPEARE well after his death . . . and that was an even greater blessing. We have no poems on bridges like the late Tennyson, famous for being Tennyson, was forced to give us late in life.

He knew that life has times and places. There was the young Shakespeare, the man of business, and the mature Shakespeare who said all he had to say and was able to rest. God bless him for that wisdom. There are many of our leaders in the church who could learn from him. How many attempt to replicate past glory? How many natter on when they have stopped having anything to say? Shakespeare had warned that all the world is a stage and left before we could say he was “sans everything.”

He left us, as he entertained us, wanting more.

To me, the most powerful speech in The Tempest sums up endings and why it is better so. The old playwright made a noble, Christian ending:

Now my charms are all o’erthrown,
And what strength I have’s mine own,
Which is most faint: now, ’tis true,
I must be here confined by you,
Or sent to Naples. Let me not,
Since I have my dukedom got
And pardon’d the deceiver, dwell
In this bare island by your spell;
But release me from my bands
With the help of your good hands:
Gentle breath of yours my sails
Must fill, or else my project fails,
Which was to please. Now I want
Spirits to enforce, art to enchant,
And my ending is despair,
Unless I be relieved by prayer,
Which pierces so that it assaults
Mercy itself and frees all faults.
As you from crimes would pardon’d be,
Let your indulgence set me free.

*It has enjoyable live blogging my reaction to reading all of Shakespeare’s plays this early summer. I hope to have learned something from the Bard.

William Shakespeare went to God four hundred years ago. To recollect his death, I am writing a personal reflection on a few of his plays. I started on Twelfth Night. The Winter’s Tale got me rolling, followed by As You Like It. Romeo and Juliet still matter, Lady Macbeth rebukes the lust for power, and Henry V is a hero. Richard II shows us not to presume on the grace of God or rebel against authority too easily. Coriolanus reminds us that our leaders need integrity and humility. Our life can be joyful if we realize that it is, at best, A Comedy of Errors.  Hamlet needs to know himself better and talks to himself less. He is stuck with himself so he had better make his peace with God quickly and should stay far away from Ophelia. Shakespeare gets something wrong in Merchant of Venice . . . though not as badly as some in the English Labour Party or in my Twitter feed. Love if blind, but intellectualism is blind and impotent in Love’s Labours Lost. Brutus kills Caesar, but is overshadowed by him in Julius Caesar.  We should learn not to make Much Ado about Nothing. We might all be Antony, but if we would avoid his fate then we must avoid flattery and the superficial love of Troilus and Cressida. We are fools, but our goal should be to accept it and not to degenerate into Biblical fools during our Midsummer Night’s Dream. Richard III is a symptom of a bad leadership community, but be careful that use Measure for Measure to guide your reaction to the mess. The modern university is Iago in Othello playing on our sins to destroy the nation. You can’t accumulate your way to a great leader and personal piety in Henry VI (Part I) is not enough to make a great king. God will save the King, not our stupid partisan squabbles seen in Henry VI (Part 2)  and not kingmakers as existed in Henry VI (Part 3). Fortunately, in God’s world All’s Well That Ends Well. Two Gentlemen remind me that being in love is grand. King John keeps winning and so loses. Slander always gives way to truth in Cymbeline. We need patrons, but God help us if we flatter them and lose them as Athens did with Timon of Athens. We need good leaders and not have to hope against reason that one turns out well like young Prince Hal in Henry IV Part One.  Being powerful is all fun and games, until it isn’t as Henry learns in Henry IV Part Two. Virtue can be jolly and edgy, as The Merry Wives of Windsor show. We can all be shrews and need The Taming of the Shrew.  Pericles did not live in a Zootopia, his world was more realistic. No revenge lest we end like Titus Andronicus.  Shakespeare shows what the fusion of Christianity and classicism did for all of us in Venus and Adonis.  It is hard to be delivered from evil, if we pursue it as did the evil man in The Rape of Lucrece. God save us from the leader like King Lear who rules by tricks and fear, though God will make things the best they can be, usually be sending us a Cordelia.  Even she cannot win without a community, as Edward III demonstrates.  God can use anyone to be a hero . . . even Henry VIII.  We should never underestimate the power of friendship . . . a power as great as romance as Two Noble Kinsmen show. Love is the great magic, creating a place safe from The Tempest where all good things can safely end.

June 21, 2016
This Magical Island: On My Anniversary (The Tempest)
Next Post

June 23, 2016 Will the Civil War ever really end?
Browse Our Archives
Related posts from Eidos