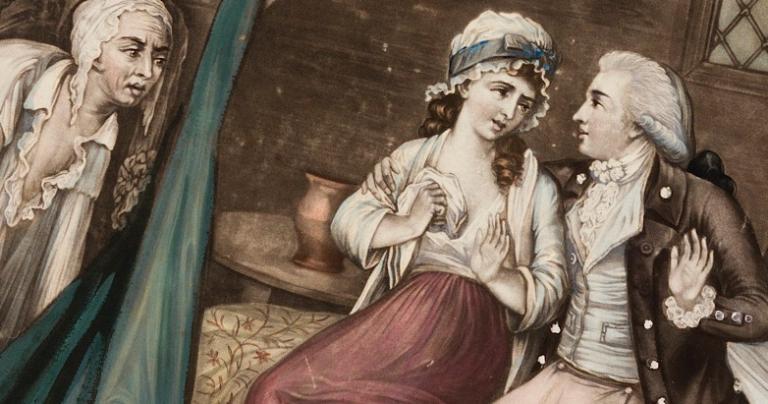 Read. Read well. Karen Swallow Prior (KSP) will help you do both. I am reading her luminous book On Reading Well.

We read for virtue, excellence, and KSP is taking us through the great classical and Christian virtues. Her courage is manifest in choosing prudence. Parents used to name babies after prudence, they still use faith, hope, and charity, but prudence is not popular any more.

Youth groups are radical for Jesus, not prudent for Christ. Picking Tom Jones (my parents’ generation, if not my parents, knew him as a singer, not a novel), was bold because when I read Tom Jones, prudence is not what I got from the text initially. Mr. Jones (the character) was a bit of a lad and perhaps as a boy it was not the best book for me. Yet now that we live with the ‘Net and all it contains, slogging through Tom Jones is not where a youngling is going to turn for his views of the fast life.

That’s too bad, because Tom Jones is good on prudence. Read the whole novel and the humor and even the sort-of-naughty bits begin to make the case for prudence. Tom Jones even makes prudence . . . No. Tom Jones does not make prudence cool, revolutionary, or radical, just attractive. Prudence is good.

We may talk a radical game, but we also really like rules. KSP points out that many on the “wild” left have their own political correctness, just as those on the right have their own rules. As she observes:

No matter what, adhering to rules is much easier than exercising wisdom.*

Rules are either a shorthand to wisdom or they are the short road to hell. Rules are signposts pointing the way:

Yet, because no number of rules or laws could cover every moral or ethical choice we face, virtue picks up where rules leave off.

Wisdom  either makes the rules as a guide or gets strangled by them.

What is this prudish sounding virtue “prudence?” Simply: “Prudence is wisdom in practice.” Who could or at least should resist “the basis and the measure of all other virtues, helping us to apply general principles to particular situations in ways that avoid evil and accomplish good.”?

KSP contrasts the ostensibly moral novel Pamela with the racier Tom Jones. This side of Elsie Dinsmore, there is no more loathsome sort-of-novel than Pamela. KSP points out that it is Jones who sides with the classical Christian tradition and Pamela which undermines classical and Christian ideas while being insufferably priggish.

Tom Jones knows that life is complicated, sin is tempting, and morality hard. Morality is earthy, but rules struggle with the complexities of life in a fallen world. Rules fail if wisdom is ignored. The problem is not pleasure, but misuse of pleasure based on our failure to use prudence. KSP notes that prudence is the human virtue that corresponds to the providence of God. Humans think, God knows.

God delights to let us consider, to think, yet if we ignore this gift, then we end up in death. God stands ready to help us… prod us. God has a voice in Fielding. Tom Jones (KSP notes) has a narrator who knows:

Aptly, Tom Jones is a book full of surprises and multiple colorful (sometimes bawdy) threads woven together by a masterful author-narrator whose highly visible presence reflects a worldview founded on belief in the active presence of an Author-God in the world of human affairs.

This is brilliant analysis missing in so much of the contemporary literature on Fielding. KSP understands the author’s faith and so does not misunderstand the authorial intent. You don’t need a Christian to understand a Christian, but sometimes it helps. KSP grasps Fielding’s confident and deeply held Christianity. If you read a Bible with Song of Solomon, you are not tempted to secularize Tom Jones just for bawdy parts.

The Bible rejects hatred of law, yet points to wisdom as a guide. It balances the fact that men are created from earth with eternity that is planted in our hearts. Ultimately, this is shown in Jesus: Word made flesh. Fielding gets this balance, because he is not a mere legalist.

The rest of us (broken but hoping to grow) keep reading.

If the world were not broken, wisdom would be whole, but the world is shattered so what is ideal is often at war with what is good. The perfect can become the enemy of the good. KSP understands this truth deeply and her example of the idealized “Billy Graham” rule is just so. Ideally, nobody would objectify anybody. (Lord, have mercy on me a sinner!) Practically, we do. In our attempt at the ideal we make a rule that turns every person of the sex-we-happen-to find-attractive into an object. The perfect becomes the enemy of the good.

We are earthy creatures, created so by the Almighty, and Tom Jones understands this truth. Legalists of the right and left wish we were angels and not human: souls with bodies. As KSP argues this is not utilitarian. Pamela makes virtue good, because the virtuous are rewarded. Tom Jones has virtue as good, because it is good. God does what is right, regardless. Satan tries to play the odds to win.

Tom Jones is with God and Pamela with the devil.

This enables KSP to understand the weakness of purity culture:

This points to a problem in the purity culture popular today in some strains of Christianity. The movement’s well-intentioned attempt to encourage believers to remain virgins until marriage unfortunately misses the mark by inadvertently making sexual purity a means to an end (such as alluring a fine marriage partner or being rewarded with a great sex life once married) rather than being a virtue in itself. Furthermore, apart from a more holistic sense of virtue, and in particular the virtue of chastity (the topic of chapter 8), virginity itself means little—as evidenced by the creative ways people maintain their virginity while remaining anything but sexually pure and by a former US president who claimed he’d not committed adultery because he’d engaged in all but intercourse with his mistress, and as further evidenced by situations in which virginity (not chastity) is lost through sexual assault.

Prudence is for chasity which will not sin, but also is not just reduced to not-sinning. God bless you KSP. You are for morality not moralism.

Moralism, that devil, deserves to be mocked! Fielding does so to life-giving effect! Yet mockery can go too far and degenerate.

KSP grasps the value of satire as opposed to mere mockery:

Satire mocks—but it does so with a moral aim. And that’s a problem in an age with few agreed-upon manners or rules. Unlike a lampoon or a parody or other forms of low comedy, satire relies on both a shared moral standard and a shared desire to attain that standard. This makes satire tricky for two reasons: first, agreement on moral standards varies from age to age, and second, some simply don’t believe that it’s anyone’s job to “correct” anyone else’s behavior.

Tom Jones (the character) is deeply charitable, but (as KSP notes) his charity is too often imprudent. We also love, but also make mistakes like Jones. At the end of the novel, Jones loves both more passionately and better. The moral man is passionate, yet this is not why one should be moral. The good is for God’s sake, not for goodies sake.

I read Tom Jones as a boy and liked it much better than Pamela (at least Pamela as I heard of it). This seemed (at the time) wrong to me, since Pamela was so moralistic and Tom Jones was not. Reading KSP will keep any future reader from this confusion.

This will be a twelve part series: Introduction, Prudence,

September 6, 2018
On Reading Well: Introduction (Interactive Reading of Karen Swallow Prior 1/12)
Next Post

September 8, 2018 Temperance Stirred Up Not Shaken in the Great Gatsby (Interactive Reading of Karen Swallow Prior 3/12)
Browse Our Archives
Follow Us!