The Restitution Chorus: Sing It! 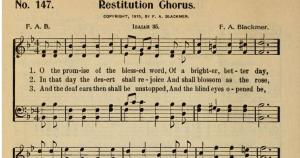 A man named William Miller made a mistake, a serious error, yet out of it good was done and beauty created.

Miller thought he could use the Bible to tell when Jesus would return. For this error, people felt free to tell  lies about his group: they said the Millerites wore ascension robes and stood on roofs waiting for Jesus, they were checked into lunatic asylums, they bankrupted their families. This was all false, actual fake news, though when they are mentioned at all, these lies still show up in history. Pop culture and media told all sorts of lies about Miller and his followers.

The Adventists did remind the church that Jesus was coming, if not in 1843, then soon. They were right about that: every human alive in 1843 is standing before God. He came for them. Everyone reading this in 2018, the year I wrote it, will be gone in 2118.

Jesus is coming soon: the Second Advent, the followup to Christmas, will occur, at the latest, at the end of our lives.

Thank God we were reminded of this fact in 1843, error and all.  Men like my great-great-grandfather welcomed the message of Christ’s return into West Virginia, even as they were not so concerned about the date. They understood that too many churches were dead as a result of forgetting to preach that all their members would soon be dead. They were often eccentric, but alive. Was Jesus returning in 1843 or 1844?

At least not as they suspected.

Meanwhile hope, the blessed hope, inspired art, music, and joy! I recall as a boy hearing old, old men sing songs now forgotten from those days and can still see the joy that illuminated their faces. They knew hope. Nobody was setting dates anymore,  yet the residue of Miller was joy. They had been enlivened by truth and the error was long gone.

Jesus was coming soon to carry them home.

A few songs from that era made it into hymnals and my favorite was The Restitution Chorus. It was hard to sing, being from the Victorian era when a congregation liked a challenge. This was Handel-light for regular people. When the Lord moved on a Sunday night in services that would stretch to midnight (nobody wanting to go home), someone might (Hurrah!) suggest The Restitution Chorus.

The organ, piano, drums, guitars, all the instruments would soar with our voices: the ransomed of the Lord would return and come to Zion with songs of everlasting joy.

O the promised of the blessed word, of a brighter better day, when the evil of the present world is forever done away: when the Sun of Righteousness shall rise with healing in His wings, and in triumph by His own is crowned Lord of Lords and King of Kings.

Francis Blackmer, the composer, was brilliant, but made the mistake of loving Jesus. As a result, he is (mostly) forgotten when Americans tell about America in the first half of the twentieth century. Blackmer should be recollected and sung.

The ransomed of the Lord? We were, are, and will be: singing songs of everlasting joy. 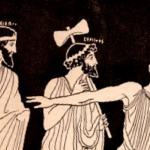 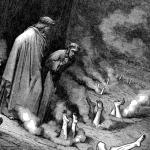 March 30, 2019 Dante to College Administrators: How much debt did our Lord insist from Saint Peter for a Divine Education?
Browse Our Archives
get the latest updates from
Eidos
and the Patheos
Evangelical
Channel
POPULAR AT PATHEOS Evangelical
1