Hades and Dionysus are the Same

243 For if it were not to Dionysus that they made the procession and sung the hymn to the shameful parts, the deed would be most shameless; but Hades and Dionysus, for whom they rave and celebrate Lenaean rites, are the same.* 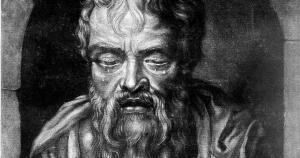 So said Heraclitus: the wisest man to live in Ephesus until Saint John moved there. Saint Basil recommends we begin our studies learning from the noble pagans, particularly in terms of virtue. Says the Saint:  “Since the life to come is to be attained through virtue, chief attention must be paid to those passages in which virtue is praised. . . .”

Religion, even Christian religion, can be bad.** Heraclitus was surrounded by bad religion and his analysis of where it went wrong in still useful. When we seek goodness,truth, and beauty using revelation and reason in religion, then all is well. When religion become centered on desires for pleasure, then it goes very wrong, though it might be popular.**

A chief act of virtue is to say “no” to desire and learn that what I wish is unrelated to what is good. However, any religion that provides justification by rationalization or a place to act on desire will always be popular. Evidently, in Heraclitus’ day, religious people paraded through the city celebrating sex and sex organs.  The noble Heraclitus, a first father of philosophy, saw this as shameful: the worship of Dionysus, drunken and foul, was ultimately incompatible with the philosophical spirit.

Obviously, the careful thought that research science and civilization demand is undercut by continuous shamelessness: or a life dedicated to Dionysius. While Plato  has a philosopher recommend some beer or wine (Laws), he did not mean what Heraclitus describes here. That a city which wishes to remain civilized may want to keep the private . . .private is sound advice. Every society thinks they have a reason this is not so, but history shows public decadence goes poorly.

Heraclitus takes the truth further however in a way that may shock the prude who has been nodding along. He notes in the end those that worship Death end up in the same shamelessness. God help us.

Avoiding the bacchanal by becoming fixated on doom will backfire. Fear of Hell*** fire is an uncertain check to shamelessness. I once was drinking with a Muslim Turk who had a few more raki than was wise and he said: “I will burn for this, but it is worth it.” The very cost of the act of drunkenness gave it a thrill, a frisson that was oddly delightful.

He celebrated Hades: if you are going anyway, eat, drink, and be shameless for tomorrow we die.

The focus on death and doom may make a man uptight, but the uptight, the prude, inevitably will fall into shamelessness. Death is no proper object of veneration or worship. When we raise a glass to life (L’chaim!), then we may celebrate properly, but the Dionysian and the Plutonian will end up in shame.

**Lord Jesus Christ, son of God, have mercy on me a sinner.

***While very undesirable, the Greek Hades here is not the same as Christain or Islamic Hell, but they are relevantly similar (very undesirable) in this case. 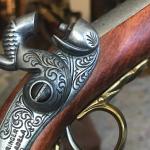 June 13, 2019
The Five Worst Arguments (or Claims) Made By Internet Theists
Next Post 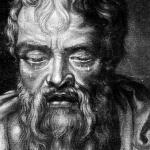 June 15, 2019 Insolence is more to be extinguished than a conflagration. . .
Browse Our Archives
Follow Us!