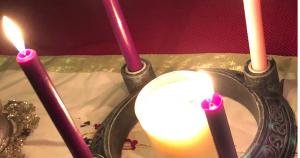 The tension between two things we have good reason to think might be true causes us to wonder: what is true? How might those two ideas harmonize, is one false, are both false? This sense of wonder is wonderful and the source of much intellectual joy in anyone with a waking mind.

We are driven from dogmatic slumber to look for the good God and the Orthodox way.

In his Ethics, Aristotle suggested that virtue could be found in the mean between excess and defect in human action. Wonder is the point of virtue between cynicism and credulity when we face tensions in education.

Cynicism is intellectual cowardice. If a man commits himself, then he sees and often what he sees is error and a need to change. A cynic does not wonder about the truth, but commits himself to doubt always. Nothing can persuade the cynic to drop his mockery. He sneers at the committed materialist, showing his flaws. The theist with an argument gets only an eye roll in response. He has seen through everything, so can see nothing.

There is no wonder for the cynic, no science, only negation in the arts and culture. He can make fun of what others build. The posture seems reasonable because he is never duped, but he also never takes an intellectual risk. What great advance in human achievement has ever been made by the cynic?

The crabby and dry world of the cynic, defective in wonder, encourages his opposite: the credulous man. The credulous man believes everything he wishes to believe and is kind. If you have a fringe idea, he may not listen, but he will nod sympathetically. The credulous misunderstand the words of Jesus. They judge not, lest they be judged as if Jesus meant that if one believed and trusted everything, nobody would ever condemn their own intellectual craziness. If I do not attack your belief that Atlantis exists, you must not condemn my theories about UFO kidnapping.

Science and sound theology are impossible to the credulous, because both demand reasons and evidence. The credulous accepts all he can and refuses to disbelieve even that which he cannot loudly accept. The credulous seems nicer than the cynic until one is smashed by physical and metaphysical reality due to mistakes the credulous have encouraged.

The person that is full of wonder, wonderful, is rarely sure, but is willing to take a stand. He will often have to change, adapt, concede, but every so often discover (great joy!) that he has found the truth! After all, the life of wonder would wonder about the maxim “I can never find the truth.”

February 23, 2020
The Pitiable End of a Noble Sort of Secularism (A Reply to Jeff Williams)
Next Post

February 25, 2020 Wonder and False Wonder
Browse Our Archives
Follow Us!

Our Culture can't cope with Suffering
Western society is probably the worst that has ever existed at dealing...
view all Evangelical blogs
Copyright 2008-2020, Patheos. All rights reserved.