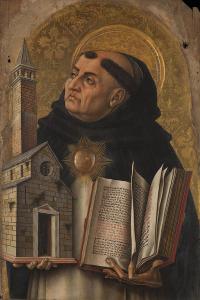 For the duration of the pandemic, I have decided to focus on the positive. Dialectic debate is good and necessary, but for the duration of the fight against the virus this blog is dedicated to helping teachers and students. As a result, some discussions are on hold as we get good cheer and resources out to students. Here is a series done by one of my favorite educators in the United States on Thomas Aquinas. This is Part I. This is Part II.

In the previous post, I argued that we ought to judge Thomas based on his evident character, and not the incident for which he is famous. Today, though, we’re going to take a look at that incident, and why John may have included it. It takes place, of course, after Jesus has risen.  In the Gospels, we are told that the myrrh-bearing women, including Mary Magdalene, are the first to hear of the resurrection. When they tell the disciples, the disciples appear to not give much credence to the story; Luke tells us that the disciples thought it was “idle tales” and didn’t believe them (24:11).  That evening, Jesus appears to the disciples and shows them his wounds. They believe what they have seen, and Jesus breathes the Holy Spirit into them.  Thomas was, for reasons unknown to us from the text, absent when Jesus appeared to the rest of the disciples.

The other disciples tell Thomas of Jesus’ appearance, and he says his famous lines: “Unless I see in his hands the mark of the nails, and place my finger into the mark of the nails, and place my hand into his side, I will never believe” (John 20:25). Eight days later, Thomas is still with the disciples when Jesus appears again. Without Thomas saying anything, Jesus offers to let him touch his wounds, to which he responds “My Lord and my God!” Jesus responds, “Have you believed because you have seen me? Blessed are those who have not seen and yet have believed” (John 20: 28).  This is often taken as an admonishment to Thomas, as if he should have believed without seeing, and thus been more blessed.  Who, though, hearing these words, has not seen? Only the reader of this passage. We are the “blessed… who have not seen,” because everyone present there had seen.

We readers are given further assurance that Jesus’ actual, physical body resurrected, through the person oft-derided for needing assurance. It is unmistakable that Thomas has touched Jesus’ risen flesh, instead of just “seeing a spirit.” An important Christological distinction is emphasized here: some Christians have been tempted to believe that Jesus’ risen body was not the flesh that was crucified. His wounds disprove that notion.   Rather than being intended to shame Thomas, John wanted us to be blessed with assurance through Thomas’ actions. Arguably, this further evidence of Christ’s bodily resurrection gives this passage importance, and thus is not merely a lesson in wavering faith.  We are indeed blessed to have eyewitness accounts of a risen Jesus, in order to have further evidence on which to build our faith.

April 5, 2020
Learning From Thomas During a Pandemic (Guest Voice Jill Bergen 1/3)
Next Post