An Appreciation of Simon and Garfunkel

There may be a time when Simon and Garfunkel do not have something to say in music, but I have yet to meet that time in fifty-six years. I am merely a listener, not one of the seriously erudite and passionate fanbase. Whatever I might say about the duo beyond mere admiration will be challenged and challengeable!

This is not about the history, the splits, or a deep understanding of the music. Instead, think of this as a recommendation to listen broadly to Simon and Garfunkel if you are looking for something thoughtful, sometimes restful, often jolly in a pandemic time. Since those are qualities often need, the advice applies more generally!

Try to listen in vinyl on a record. First, the recordings of these singers as young men were made with the quality of vinyl in mind. Second, the songs that appear on “side A” and “side B,” the limited number of songs that can fit on a recording, and even the “gap” between the songs are intentional. This is the best way to experience the music as intended.

Paul Simon and Art Garfunkel can give a good overview of the politics and problems of the late 1960’s when the optimism of the early part of the decade, think The Dick Van Dyke Show, gave way to segregationist violent resistance to change already too long delayed. What went wrong? Part of the answer might be found in the cryptic Mrs. Robinson. The social conformity of their elders as a substitute for sincere belief, keeping up appearances for the neighbors instead of authenticity, these kids were on to something. The system needed to be rocked and if the younglings doing the critique turned out to have their own problems and no real solutions, listen to The Boxer, that did not mean the broader critique was unnecessary or wrong.

Listen to the two perform “He Was My Brother” to hear a beautiful voice from that time. This music is not dated, just has a date. Simon and Garfunkel are mourning the loss of a young freedom rider in a particular moment in America’s long battle against white supremacy. The battle continues, the particular date illuminates.

If that seems too political for your soul just now, listen to Bridge Over Trouble Water one of the most beautiful descriptions of friendship in popular music. Pray God you find someone in your life that loves you with the commitment expressed in this song. Turn to The Sound of Silence for a meditation on isolation and the need for this deep connection between people that is hard to find, even in a city. Combined with Scarborough Fair and there will be reflection and rest for a tired soul.

If the social distance between you and life is filling you with dread, then Cecelia will get you rocking along again. Sure nobody says “groovy” anymore, but Feelin’ Groovy might tempt you. Don’t, but let the last two men alive allowed to do so help you feel groovy. One fun song that is a bit dated (the historical references creak) is At the Zoo. Forget what it means and just have fun. All of Simon and Garfunkel has a cloudy lining to every silver cloud, but that keeps the music from schmaltz.

Paul Simon went on to a splendid career without Garfunkel and was an outstanding concert musician. He just had his last tour, though musicians say this a great deal. Art Garfunkel was perhaps less successful alone, but his voice was and is beautiful and he made one album that remains one of my all time favorites: Everything Waits to Be Noticed.

I should admit that my wife taught me to love the pair, particularly Paul Simon . . . nearly canonized for her children. . .She was taught to love a group “before our time” by a primary school teacher which shows the good that can be done in public education! I have certainly benefited from the introduction and the concert we saw of Simon and Garfunkel together (surely the last chance for that pairing!) was one of the pop music highlights of my life.

One is legally required to end a discussion of Simon and Garfunkel as American legends, old musical compassions, with Old Friends. They sang it when being old was far ahead, close, and when seventy was behind them. Our Republic’s citizens could do worse than find an old friendship with each other. 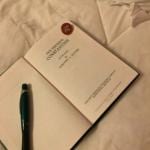 April 20, 2020
The Beginning and the End of Fire (Saint Constantine and Dorothy Sayers)
Next Post

April 22, 2020 Finding the Word Beyond Our Intellect (Old King Coel and Dorothy Sayers)
Browse Our Archives
Related posts from Eidos