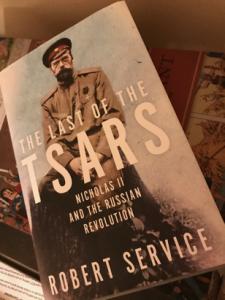 If you assume something is true, then showing that it is true is easy. Contrary facts can be forced into your general view of reality.

Robert Service knows more about Russia than most Russians, but that has not kept him from writing a pitiable book on the last Russian Tsar. One imagines his publisher rushing to the scholar and saying: “Nicholas II is box office. Write a book.” Charity forbids thinking the author made this calculus, though the book is a collection of assertions about the views of Nicholas II after his abdication that are, to be charitable, underdetermined by the evidence. Robert Service plays the sort-of-scholar’s game of putting sycophants to his right and haters to his left so that he can be the reasonable one up the middle.

This would be most excellent if he made any arguments for his assertions, instead of asserting them boldly and then explaining the evidence by the assertions. Robert Service thinks the last Tsar mentally inflexible, and perhaps he was, but Service does nothing to prove this is so. In fact, the multi-lingual Tsar strikes one as curious and interested in everything, while maintaining a necessary guarded relationship with his captors (who would butcher his family). Mayhap the martyred Tsar is intellectualIy inflexible, but Robert Service does not prove that fact. The facts, in fact, dispute his conclusion.

Nicholas II reads voluminously in exile, forms somewhat close relationships with his captors (including Kerensky!), keeps asking questions, makes friends in odd places, admits that his son might have made changes he did not, but Service asserts (continuously) in his book that Nicholas II remained intellectually inflexible. Nicholas reads books critical of the old regime, but nothing can shake Service in his understanding of what Nicholas is thinking. At one point, this set of assertions disguised as history admits that Nicholas liked a book, did not comment on why, and then Service spends paragraphs of his book quoting paragraphs from that book that fit Service’s psychological guesses about the Tsar. One can imagine Nicholas chatting with Service, hearing his views, pulling on a cigarette, and then thanking him for coming.

He was in prison and anything he said could be fatal.

Since Robert Service is Robert Service, this throw away book will not harm his (otherwise) outstanding career. Why should it? Nobody should be judged by our worst day or our worst book, not even a martyred Tsar.

Why should you care about this book about a dead monarch that can be digested in an afternoon?

If you read enough books about the fall of nations, then you see how quickly that fall can come. You might be living a decent life in Petrograd and ten years later facing execution by Reds. Things can get worse and when they do, they do so quickly. This gives pause. When the younglings say: “Nothing can be worse.”, then you recall that other younglings have said this in other times, had historical facts to cite, and things got very much worse indeed.

You also see that even decent people can refuse to change when change is necessary, when only a little compromise might have helped and they do not. They stand firm on minor things and so refuse to save what could be saved and lose what should never be lost.

You also see that present apocalyptic thinking in America is overblown. We do not have, quite yet, an Ancient Regime. We do have problems, but if we are calm, talk, then all will be well. We are not fighting World War I while in an economic crisis with a government that is inflexible.

It is, perhaps, easy to fit present facts into such a model if one will not look at counter evidence. There are sounds of health as well as sickness in our time. History provides not exact parallels, so even though we are in hard times, we are not, mayhap in times like Russia in 1917.

In fact, this is absurd.

So beware anyone, scholar, pundit, me, who would too easily adopt a view of history and then force everything into that paradigm. Left, the dominant voice in today’s American academy, or Right that is the way of folly. Instead, avoid the errors of the Imperial family, the tendency to find scapegoats, to demonize, and instead emulate the duty driven calm in the face of adversity. Do not panic. They did not even as they moved from one prison to a worse prison.

Times are not this bad. We need to stop the panic and do our duty! That’s what I was reminded of by reading this facile book. The family portrayed was better than the book.

Holy Imperial Family pray for us.

June 28, 2020
Thomas Dixon, Birth of a Nation, Woodrow Wilson, and a Mistake
Next Post

June 30, 2020 On the Dog Nessie and Recollecting Reality
Browse Our Archives
Related posts from Eidos