The new morality is too often the old immorality tricked out in pseudo-scientific language or backed with force. Many seem to assume there is something new under the moral sun, but there is not.

Some wish vice to be labeled virtue. Worse men bully and hate.

Vice cannot be virtue and we must love our neighbor. Christians must not defy the laws of nature and of Nature’s God, but we also will not bully or hate.
Some confidently say, “Applauding behaviors supported by decadents in ancient times of course does not indicate that we are in danger of decadence, because we know so much more than the ancients.”

After all, progress in one area, technology and economic standards, does not equal progress in every other area. Stalin had better weapons than Joan of Arc, but was a much worse person. North Korea has better technology than nineteenth century Switzerland, but much worse politics and morality.

What exactly is it that we know now that necessitates a change in the hard won wisdom of nearly every ancient culture?

It is all still wrong.

There is nothing new, but every old vice always comes announcing that this time, surely this time, it is different. Surely we are not so ethnocentric or full of chronological snobbery that we believe that every previous civilization that opposed our morality was morally primitive? This is the breathtaking arrogance of the Victorian colonialist not (supposedly) of modern men and women.

Actual science can never teach us what should be true, only what is true at the moment. Of course, this was the case when pseudo-scientific pronouncements, such as those of Freud, agreed with traditional morality on some issue and is still the case when they do not.

Moral reasoning does not come with a calendar and the belief that we have moved “beyond” ancient wisdom is a prejudice no more attractive now than it was one hundred and fifty years ago in Victorian England. Every civilization must balance the need for progress against the demand to throw out ancient truths because of that progress. Victorians thought “science” confirmed their weird sexual prejudices and now middlebrow opinion thinks the same about America’s. The fact that often they are the opposite opinions should warn us that today’s moral fads will be tomorrow’s folly.

Being asked to condone any number of vices is not exactly new! Traditional religion, which does not measure the value of an argument by the date or by fashion, is not deterring progress. It is deterring decay. Civilization partly consists of teaching men and women to say “no” to desires, say our greed or covetouness, that are not productive or useful to their souls. What is productive? First, we would have to know the facts about the cosmos. Is there an afterlife? Is there a God? Does He have opinions on what we do?

There is, He exists, and He does.

Hatred, desire so utterly twisted that there is no good left in it, is the worst vice. Any love, no matter how misdirected or misunderstood, still retains some of its Divine origin. All love is capable of doing good as well as harm. Hate has no such charms. When students are bullied in school for any reason, this is wicked. There is not even the faintest glimmer of love in it and there is nothing of Christ.

When reason is replaced by mindless physical coercion or shame, this is worse than a moral mistake. It is grossly immoral.

Jesus, who was without sin, would not throw stones and we should not either. My primary focus must never be one my neighbor’s temptations, but on my own. I must love my wife better, be good to my friends, and even learn to pray for my enemies.  There is hope for every person, because God loves every person.

This wisdom will be around in another hundred years for whatever old immorality or hatreds creeps back into our culture.

August 19, 2020 Based on the World Around Me and In Me
Browse Our Archives
get the latest from
Eidos
Sign up for our newsletter
POPULAR AT PATHEOS Evangelical
1

The Signs of Wilmore, Kentucky: A...
Anxious Bench
Books by This Author John Mark Reynolds 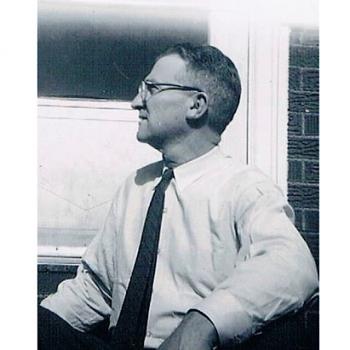