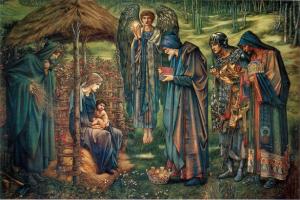 Last night I went out with my binoculars, a star chart on my mobile, and saw a marvel. Jupiter and Saturn were close enough together from our earthly vantage point that to my very bad eyes they appeared one light. The binoculars gave me some detail and going online showed me more of the wonder of creation. For millennia men have been able to calculate the motions of the stars, sun, moon, and planets and so predict such sights.

The orderly nature of the cosmos suggested to the ancients that there was a regularity to the All, everything could be ordered. This observed order was a forerunner to scientific methods that are a great gift of humankind. Seeing what Saint Francis saw, what the ancients saw, and knowing the good fruit of their reflection on creation was cheering. This was not a miracle, a star over Bethlehem, but the beautiful engineering of the master Craftsman.

Oddly, this marvel is disappointing to many of us, because drunk on pixel flashes on screens, we expect something more immediately dazzling. I know the feeling as I was underwhelmed in college when looking at Haley’s comet, a smudge of light through our college telescope. Only when I regained the ancient wisdom of Dante, Kepler, John Chrysostom, the Scriptures, and Plato could I see as poets, scientists, theologians, and philosophers must see. They saw how great the cosmos was and how tiny by comparison we were. Our works are humbled by the stars and planets. The utter vastness of the cosmos is untouchable by man if we strained for a billion years.

The conjunction of these two planets came and I saw that motion with the perspective of an Earthling over the staggering solar distances. This was beyond me: no special effect, reality.

We can dim the light of the stars with pollution, but we cannot put them out: not one. The planets dance around the Sun following the laws the Creator made regardless of us. Jupiter and Saturn are for Jupiter and Saturn and move as God made them to move. Science tells us about this motion, the poets describe it, and the theologians tell us why.

A certain mistake is sometimes made in using such predictable events as a fortune teller would do. The planets align just so and our fates are sealed. A comet flashes over the heavens and brings plague and pestilence on us. This is quite wrong, but perhaps one reason for the error is a failure to understand “signs.”

Sometimes a natural event, something that can be foretold, also acts as a “sign” to us. This can be quite particular. Once I was very sad, called Mom and Dad, and Mom encouraged me from Scripture. As I drove into the driveway, a rainbow appeared over the house and I noticed. (I am often quite unobservant!)

God used that natural event, that appeared to many, as a prompt to my soul. The general event was made particular to me. He has, in Scripture and the history of the Church, provided a vocabulary of such prompts. There have been many rainbows, I have seen quite a few. This one stirred me in a new way. The rainbow did not cause or foretell anything: no augury here! Instead, the natural world was created with a vocabulary for us and the natural movements of the world can be used by humans and the good God to remind us of deep truths.

The planets in their motions do not control our fates, but may be used by the human artist or artistic God to remind us of our fate. When a comet is woven into a tapestry to show the coming death of a king, that is a sign to the person looking at the art. When God speaks to us, using rainbows, comets, or conjunctions, He will say what He is always saying, but impress the truth on us afresh. We will have an outer sign to an inner truth: “this is like that truth.”

There is no money to be made here: the sign is common to all. There is nothing spooky, but much loveliness. When the two great planets, the giants, swung close together from an Earthly perspective, I was reminded to have peace: the rule of the cosmos is in Heaven. Times may change, this Republic might fall. Other nations will wax and wane. All will be well and more than well, because the cosmos is in the hands of the great Jehovah. 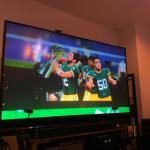 December 21, 2020
We are the virtual champions! (On a Kind of Virtual Good)
Next Post 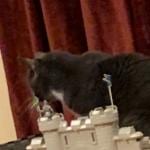 December 23, 2020 Mighty Athena in the Castle!
Browse Our Archives
get the latest from
Eidos
Sign up for our newsletter
POPULAR AT PATHEOS Evangelical
1

Once More Into The Breach Podcast and Links
It is an excessively gray day here in the North East, and...
view all Evangelical blogs
Copyright 2008-2021, Patheos. All rights reserved.