A Utopia that is Someplace for Us (Epiphany)

A Utopia that is Someplace for Us (Epiphany) January 6, 2021 John Mark N. Reynolds

On the road, you come to places that are marvels, known to those who live there, but unknown to you. So it was when our friends took us to Utopia, Texas a very real place and we ate breakfast, and ate some more breakfast, at The Lost Maples Cafe. The food was great, the service better, and the conversation grounded in the place.

The original “Utopia” was an ideal place that whose name meant “no place” in an important political book. The saintly author dreamed of a better country, Utopia, while dealing with a monstrous king. The tyrant had lost his head and dreamed that he could separate what no man could put asunder. The author hoped in God and prayed God’s will would be done on Earth as it is in Heaven. He became a saint for wishing for more than earthly power could provide.

The author of the original book “Utopia” never forget the old truths: the ones learned from his mother or heard in catechism. Rulers, the effete elites, can become ungrounded. They forget that the delicacies on the table came from the soil. They have forgotten the dirt and the farmer, the vineyard and the vinedresser, and so they are lost. Reality begins to fade away as they make images of marriage, a sixth in this shadowy land is as good the first, and make a mock justice.

Utopia Texas has forgotten nothing as far as I could tell. They certainly have not forgotten the dirt from which man was made. I heard a hard story that morning, but also how kindness was redeeming the struggle. This was not a perfect place, but a real place given the name Utopia. These are aspirational people living in Utopia looking for Paradise, and not another Texas town! I am told that there was going to be one of those planned communities, nineteenth century Irvine, that never quite got started and so the planned city name, Utopia, stuck, but not the plan. There was no planning I could see and woe betide the regulator that tried.

There wasn’t a lot of rule following going on the day I was in Utopia, just normal living.

This citizens had made a pretty nice someplace, defying time and various historical events, to exist. On the road, finding Utopia, sitting in Cafe, looking at the pictures of Utopians gone before, on Epiphany, I felt in the middle of the meaning of the holiday. Epiphany is a revelation, a lighting up of a hidden truth: Jesus found by wisemen as King, Jesus baptized in the Jordan. Jesus was a King, before the wisemen. They just discovered the truth. Jesus was the Son of God before the Voice from Heaven, John the Baptist just heard the truth.

The cafe did not hide much: bacon, eggs, pancakes, biscuits, gravy. The food came was good. The presentation was a plate and eating utensils. This was a revelation. There is nothing wrong with gilding, so long as we remember it is not pure gold. The rulers of this age need not go mad and can create universities, cathedrals, and culture. They give us beauties, at their best, that are an epiphany based on the fundamental epiphanies. A great city, like Houston, can be a someplace Utopia too.

Yet the ingredients of life, of someplace, are earth, air, water, and fire. We eat bread and wine, body and blood. We are sons of dirt, air breathers, looking for sweet water, with a fire in our belly for eternity. Utopia is someplace, in fact, anyplace if we see the place in God’s good light.

If you wish a real breakfast and to see some light, then drive deep into the heart of Texas to the Lost Maples. Get a pie. 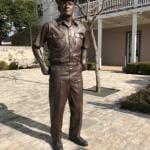 What Rejecting God Did to Higher...
Cranach
Books by This Author John Mark Reynolds