The Role of Portable Space Heater (Nessie Finds a Way)

If you are the Wonder Dog Nessie, you find a way to be loving.

In her about-a-year-of-life the dog Nessie had never experienced such cold: 40 odd in the house, 8 outside. Houston got cold by Houston standards which would be laughable by Rochester, New York standards, but Nessie has never been to the Great Snowy North. If a man who had never run a lap was asked to run a mile, the marathoners should not mock. If a dog thinks 40 is cold, she should get a bone treat.

We were not ready for the chilling challenge.

As the house grew cold, Nessie grew worried. Her routine was disrupted as “fetch” became hard when the slobbery tennis ball began to stick to surfaces. Her jolly friends (Sunny! Chompy!) were not out at usual times and everyone was home all the time. That was good, but the candles, the propane fire, the lack of showers from the humans all presented too many new sensations at once.

Nessie, the Wonder Dog, found a role: portable space heater. She loves to nuzzle under the blankets, being a good dog and all, heating up the space. She could make almost any temperature warm. Of course, she also benefited, since being a wonder dog she knew that when everyone is happy, including Wonder Dogs, then all is well. A cynic, on good grounds, can question whether this act of altruism was intentional, or whether she was merely getting warm.

I prefer, seeing her waggle her whole self and lick the hand that feeds her, to believe that love found a way. And as is the fate of those who teach, I thought of an Application while kicking away a blanket because Nessie had made me too warm.

We can, being human, as Aristotle might say, reason better than Nessie the Wonder Dog. We can do a more wondrous thing and go beyond “ball,” “poop on the grass,” and “bone treat.” We can extrapolate to any number of ways we can be helpful. We should be able to far surpass the dog Nessie.

That I do not, often enough, is a shame.

What is a new role now when I cannot do what I do most days? How can I help other housemates? How can I help everyone from the Beta in the bathroom to the guest in the guest room? If Nessie can become a portable space heater, what can I, with the flexible thinking of a human, do?

Nessie the Wonder Dog is not given to despair, because she cannot see far enough, consider dreadful possibilities. The world is simpler. We cannot wish to be Nessie, but we can learn from Nessie. She was never less than she is, so she became, in a pinch, useful, companionable, and fine. If we started with those goals, then we might find new roles, even in a bit of a crisis, and so be at least as useful as a dog.

The greatest thing about Nessie the Wonder Dog is her unflagging glee and love for balls, bone treats, and bouncing about the house. She finds a way to fetch, chew, and waggle regardless. I suppose times could grow really hard (not just sort-of-not-great) and Nessie might fail, yet she did not fail us as our portable space heater. She was full of love!

My goal is simple: may I find a way to bless, be kind, love my neighbor. May I find a way, a new role, even more jolly than Nessie the Wonder Dog. 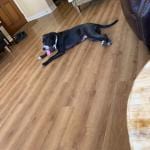 March 5, 2021 Just Tired (The Life of Nessie, the Wonder Dog)
Browse Our Archives
get the latest from
Eidos
Sign up for our newsletter
POPULAR AT PATHEOS Evangelical
1

The Rewards of the Kingdom
There's no question that the New Testament teaches that there will be...
view all Evangelical blogs
Copyright 2008-2021, Patheos. All rights reserved.
error: Content is protected !!