Beware the Clever Lies of the Functionary (Greek Bicentennial)

God save us from the role of functionary to the Empire: condemning what the powerful condemn as we try to side with history instead of Truth.

This year of the bicentennial of Greek independence may we emulate the courageous and avoid the cowardly.

Patriarch Gregory worked for peace, condemned hopeless warfare, but was willing to die for his people. He would not live by lies knowing it was better to die than to tell a lie. His martyrdom, hanged in the entryway to his own church, will never be forgotten. The entry was sealed until he returns with King Jesus to open that door.

Four hundred years resistance to tyranny produced many heroes, most not known by name. There also were some, best unnamed, who compromised or even became enamored with the Imperial establishment. Tyrants can buy cooperation, victory spawns defenders of the morality of the victorious, and most humans are tempted to side with the direction history seems headed.

Greek independence was dead for four hundred years. Acts of resistance seemed futile, were viewed as useless, right to the year of Greek independence. Just before the victory was won, Athens was lost to the Empire. There was then a certain studied person who could see how freedom fighters were to blame for their own subjugation. A Judas exists in every age: willing to sell out the Christ, or the people of God, for money. This traitor is straightforward so easy to see and condemn. More subtle is the scholar, the functionary, the worker for the Empire, who claims to be purging his people of their sins. He may denigrate the folks, but claims this is for their own good. If his opinions seem strangely close to those of the paymasters in Istanbul, he purses his lips, frowns and asks: “Cannot we learn from anyone? Look at our own faults!” They claim to be helping indirectly, but are praised in the Sultan’s palace. They are the “good Greeks” willing to play ball. If they end up rich, then that was not why they went along with the spirit of the age.

If the functionary, the academic in Istanbul,  jumps Jim Crow, there is always an excuse that clever people can make for him and if they make it long enough then the functionary can start believing it. The tame Greek had an epiphany, somewhere working his way up in the Imperial establishment, that the folks back home earned their misery. Whatever little power, whatever little corner of the is free, is examined, weighed in the balance, and found wanting. Being human any place where power is found, even if the power is small, will bring corruption. The world, flesh, and devils will be manifest. As a result, the functionary can expose the sins of the resistance, and there will be great errors, while being silent or nearly so about the greater crimes of Empire.

Both can do the same, but the functionary, the toady of the Empire, will target what the Empire targets. The Greek who loathed the Greeks existed.

Didn’t the functionary expose real evil? Wasn’t he in a position to do some good on the edges of the culture for his people?

The problem, the soul searing difficulty, is that this is a life lived by lies.  A problem for the functionary, the clever man, is that he benefits by his actions. His target is unpopular with the Establishment, at least the one that he admires. He is siding with history: hundreds of years of history. This lier, this man who profits by his lies, can never be sure that he is not merely a moral coward. He attacks just when the attack will tell. He knows where the bodies are buried in his own people and he delivers the receipts to his masters. The lie is not the evil he finds, but that he is motivated by anything other than cowardice.

The man who lives by lies often will be called courageous for attacking his own folks. After all it is easy to pretend that one really cares about the curses of the Greek farmer, the meanies, and is not motivated by the positive reviews in the Seraglio.  The very best functionary for the Empire gained thirty pieces of silver and a red badge of courage! 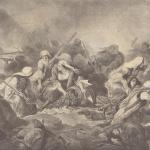 April 7, 2021 Folk Art is Art (West Virginia and the Greek Bicentennial)
Browse Our Archives
get the latest from
Eidos
Sign up for our newsletter
POPULAR AT PATHEOS Evangelical
1