The Light on the Throne: Ending a Patriarch 4/4 (Heading to Holy Week)

“Let us now praise famous men, and our fathers that begat us.” 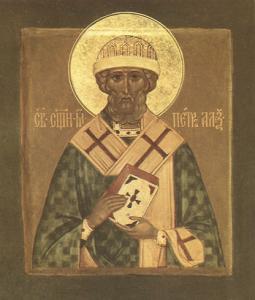 Before the New Testament was completed, Christianity was African. Africa was, is, and always will be a powerful center of the Christian life and message. The patriarchate of Alexandria (Egypt) was a center of scholarship and culture that radiated out to lands such as Aksum with her great King Kaleb.

One remarkable leader was Peter, Patriarch of Alexandria, scholar, preacher, servant to the poor, and defender of orthodoxy against external and internal foes.  The great man would never sit on the patriarchal throne. He saw a great light, the throne felt full of divine power, and so Peter preferred a stool nearby. The troubles of the early fourth century did not give him much time for sitting in any case.

The Romans of Alexandria were engaged in one of their sporadic persecutions of Christians. Times of trouble forced Peter out of Egypt, but he continued to care for his people through pastoral letters. When he could, Peter would return to Africa and slip into the prisons to encourage those who were arrested. This was a time of martyrdom. External problems were rough, yet as always, the divisions inside the Church were worse, weakening the work of God.

Arius, a brilliant mind given to terrible ideas about Christ, destroyed the unity of the Church. Arius was slippery, pretending to orthodoxy, full of tricksy double talk. By God’s grace, Peter was his intellectual match and was able to warn the Church about Arius and his lies. Like many a faithless academic and leader since, Arius and his disciples wished to live off the generosity of the orthodox, use their schools, all while nudging the faithful toward heresy, playing the victim when exposed, substituting “sincerity” for theological and philosophical rigor. Peter was unmoved, a rock of intellectual honesty.

There is a danger to dodging external enemies, the pagan Romans, and shifty intellectuals: spiritual hardness. Too many who would debate, who are rigorous in thought, become hard hearted. A fierce commitment to truth can degenerate into anger. Peter was pastoral. He gave help to the poor and made a good life possible for widows and orphans. Peter loved the people of Alexandria with as much passion as he hated theological lies. Peter’s personal piety matched his preaching. The great saint, who had led a school in Alexandria, was a polemicist after he was a pastor.

Beware the defender of the faith who does not serve the faithful.

If there is a time for fighting off the wolves, most days the job of a shepherd is to tend to the needs of the sheep. Peter was a brilliant writer, yet as likely to be ministering to prisoners as taking on the heresiarchs. Beware those who hate better than they love.

The Romans caught up with Peter at last. His popularity was so great that they had to behead him at night. In the morning, the Faithful came, tenderly gathered up his head and body.  Peter was lovingly placed on the throne of the patriarchs by his people. He was worthy, because the pastor, scholar, patriarch had finished his work.

He basks forever in the uncreated light. 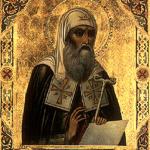 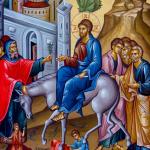 April 25, 2021 Father God and the Humble King (The Palm Sunday of the Faithful)
Browse Our Archives
get the latest updates from
Eidos
and the Patheos
Evangelical
Channel
POPULAR AT PATHEOS Evangelical
1