The Passion of Jesus and Chios (Greek Bicentennial) 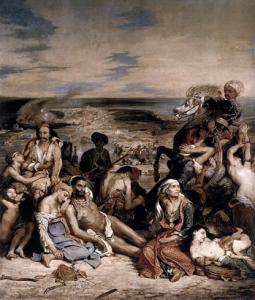 Rebellion against the tyrants was not their first choice. When the choice was thrust on them, when history caught up with the gentle, beautiful island of Chios, they kept being, gloriously, Greek, Christian. This was intolerable to a rotting empire, more eager to make new slaves and kill everyone than to allow liberty.

Three quarters died or were enslaved on Chios.

Consider: 75% of the freedom loving Greeks were murdered or made slaves for the love of God and Greece.

What is persecution? Look to Greece (Hellas) where for hundreds of years a tyrannical power kidnapped children to serve in the army of the tyrant. Look to Hellas where for centuries only the Church and a love of the nation, true patriotism, kept Hellenic culture from dying. The Greeks had inspired the Revolution of 1776 in America and all friends of liberty around the world. You cannot, after all, say “democracy” without Greek. They kept rising up against the tyrants, the decadent Ottoman Empire, and being smashed. Monks built places of prayer and safety on the tops of great rocks and endured. These enduring Hellenes made art, architecture, and a life of holiness that was richer than all the cultural appropriation of the Seraglio.

What is courage? Look to the common Hellenes who endured and refused the easy way of joining the state religion. They kept faith with classical and Christian culture, because that is what Christian culture urged them to do. If they had made the Scientific Revolution possible, the fact that they were cheated of the benefits by their masters did not keep them from enduring. Finally, in 1821, the rebellion began that would win the liberty of the Greek peoples.

What is it to be an ally? Look to the philhellenes who took up the cause of liberty for Greece as their own. These men came from all over the world to fight for the cradle of democracy, science, philosophy, and orthodox theology. This eventual liberty was won with help from the many nations the Christian Greeks had created in the Eastern Roman Commonwealth, especially Russia, and in the West that they educated. When intellectual darkness threatened us, the Greeks were there. They had given the West a Renaissance and now the West returned in the early nineteenth century, even if imperfectly in figures like Lord Byron, to lend help.

Any friend of philosophy, must be philhellene.

For Chios by the wine dark sea such help would come too late. They had to die, so that the children of Hellas would wake up to the crimes of the tyrants. They fought when they could, only a coward or the rare saint is a pacifist this side of paradise. They were martyred when they must be martyred.

Chios had resisted rebellion. They tried to cooperate. They did what they could for peace. When neighbors raised the banner of liberty, they were left with no choice. The tyrants easily crushed armed resistance, but that was not enough for tyranny. Wining is never enough for tyrants. They are afraid of the truth, they live by lives, so they had to kill, steal, destroy and finally enslave everyone they could find. One in four Greeks escaped, but the rest died or faced worse than death.

Be encouraged: the Good Friday of Chios bought Greece liberty. The civilized world was horrified by the destruction of Chios. War is brutal. Crimes are committed by all sides, but the annihilation of Chios was on a different level of barbarism.

The love of country, of a people, of a way of life, can sustain a person in horrific times. Any love can be disproportionate, can be twisted by tyrants. A way to know the purity, the appropriateness of the love of country is to look to the example of Chios. On beautiful Chios a peaceful people were martyred by tyrants. The people of Chios refused to be less than they were, Christian Greeks, and so were enslaved and murdered in the tens of thousands. They went to God kept in safety for all time. The Greeks, and all friends of liberty, recall the people of Chios and the debt we owe to those who were joyfully themselves and so found Memory Eternal. 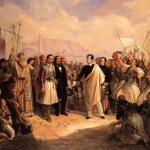 April 3, 2021 Endure as the Greeks Endured (The Greek Bicentennial)
Browse Our Archives
get the latest from
Eidos
Sign up for our newsletter
POPULAR AT PATHEOS Evangelical
1