We NEED you Larry Dexter! (On the News) 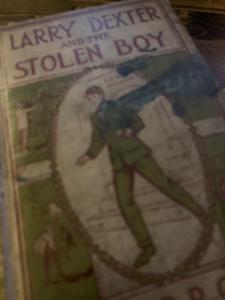 We need the journalism of Larry Dexter as described by Howard R. Garis.

Howard R. Garis was, we are promised in the sales pitch for the books series, a “practiced journalist.” If we read the books we will be given a “. . .true picture of the workings of a great newspaper. Incidents taken from life.” At the very least, we can read the aspirations of an early twenty-first century journalist for his craft. What was an idealized image of what a reporter did in the year Titanic sank?

Garis wanted “a great newspaper” to break news. The editor would tell his reporter to: “follow the clews wherever they lead. Don’t mind the expense; the paper will stand it.” Responsible papers would use the stories to crusade for better laws. Larry Dexter, reporter, rescued kidnappers and got his paper to lobby for harsher kidnapping laws.

Garis used-to-be-famous for his Uncle Wiggily stories. Under various pen names I first met him through the Tom Swift (I still want an airship!) and Bobbsey Twins (To the woods for a picnic!) series of children’s books. Books for children contain what the establishment of the era thinks is least controversial. An excellent window to the least controversial values for a society are the first chapter books given to children.

One noble craft in 1912 was the reporter: truth teller, problem solver, advocate for justice.

From 1907 to 1927 Garis sent his fictional reporter Larry Dexter after a series of “scoops” or “beats” for his big city paper. Dexter used clearheaded reasoning to go with endless pluck as he went off rescuing millionaires, lost boys. He was “intrepid” in Belgium as a wartime correspondent.

These books are easy reads, but there is a reason Garis (with his writing partner and wife!) sold more children’s books than anyone else in America at the time. He gets to the action quickly, teaches his lessons gently, and throws in a few plot twists to keep things lively. He also had some endearing quirks. Garis loved putting “slang” or random words in “quotation marks.” What words? Sometimes edgy stuff like “word-slinging,” but often just “words.” Dexter still used a ‘bus and a ‘phone when talking about getting on the omnibus or using the telephone.

Dexter will not lie, reconsider an idea, and find his own facts. If he has to punch a perp to save a kidnapped child, then our Hero will put his boxing skills to use.

One cannot recommend a Garis book to children, too often they reflect the prejudices of the age, but they are useful to grownups as a window into what was. The books take the aspirations of the time for granted and so the good we might have lost.

The ugly is obvious enough.

Cities with numerous newspapers in competition to sell “papes,”  competition for “the scoop,” had led to yellow journalism that helped get the United States in the Spanish-American War. Larry Dexter is not a character at the end of a golden age of truth and justice in media, but a what-should-be figure for children of the time. What did decent Americans think reporters should be doing? Why were we so keen on freedom of the press?

Larry Dexter made the case to the kids. Our Hero found the truth and then made sure that the truth counted. If there is corruption in the City, root it out, then get anti-corruption laws passed and sound candidates elected. Americans always have needed a Larry Dexter and reporters should at least try to match his virtues if they will never have his expense account.

What do we need from some present day Larry Dexter?

Larry Dexter did things.  He went off to cover the story. He did not rewrite other people’s experiences from his room will talking on the ‘phone (“the instrument”), but went to the scene and made sure what was true. Bad journalists, like his oft “scooped” rival Peter Manton, might cut corners, attributing Larry’s success to “luck:” “But we know that Larry’s luck consisted of a great deal of hard work.”

Larry Dexter had pluck. Dexter was a risk taker. He wrote from his perspective, corrected errors, and kept following the story “doggedly.” Pluck, courage with a work ethic, kept Larry looking into events when indolent reporters went home to write the same story as the other reporters.

Larry Dexter knew when to “knock off.” Dexter was not afraid of a Sabbath rest or vacation. He would take an opportunity to squire a girl to a concert. If this sometimes also led to a “scoop,” Garis never wastes a page on mere dialogue, then Larry also took what pleasures he could while working. For a character whose work ethic is touted throughout as admirable, Larry Dexter was unafraid to dance, enjoy a cruise, or have dinner with Mother. Dexter is a reminder that the constant news cycle and shortened attention span is not good for people.

Larry Dexter could give a manly apology when wrong. Dexter was careful to keep his paper out of court trouble, yet follows the “bad guys” relentlessly. Sometimes his assumptions are wrong, if so,Dexter makes it right. He does not give a back page correction, but does the right thing. He is always open to changing his mind even though he has strong opinions.

We need you Larry Dexter.

April 18, 2021 Join Global Christendom
Browse Our Archives
get the latest from
Eidos
Sign up for our newsletter
POPULAR AT PATHEOS Evangelical
1