Music matters. Music matters too much to leave to the professionals. This thought, more Plato than mine, inspired a key leader at our School and College to write. Here is Lauren Turner, director of Fine Arts!

Since moving to the Houston area almost five years ago, I have learned that Houston has what is referred to as a “rainy season”. This rainy season takes place somewhere between January and December of any given calendar year and its trademark is many days of continuous rain interspersed with hour long breaks of blazing heat and sun, quickly followed by intense downpours. We are currently in the midst of this rainy season and the aforementioned sequence has been taking place for many days. Consequently, when I noted there was a break in this sequence, I promptly leapt out from under my covers and decided that I was going to take my family and get outside while we still could, without the danger of being washed away in a raging river of rainwater in the streets.

We decided to go for a walk to a local bistro for lunch. My four-year-old daughter, Cecilia, was so unbelievably delighted to have her own, personal umbrella that she had little care at all for where she was walking, and I spent half of our trek shielding her from traffic while pushing a stroller. On the way back home, my two-year-old son, Benedict, was wailing because he lost his favorite toy car, and our ankles and legs were being showered with a mix of rain, mud and debris as cars and trucks sped by us hastily. It was sunny yet unbelievably disgusting after a torrential downpour and suddenly Cecilia started belting out “I have confidence in sunshine, I have confidence in rain!” from her favorite musical, The Sound of Music, at the top of her lungs. It was noon in our quiet neighborhood and her massive voice was echoing amongst the trees, mingling with Benedict’s bloodcurdling shrieks. Shortly thereafter, Benedict cheered up and started singing “Doe a deer (Do-Re-Mi)” and Lydia started singing a folk song about a duckling in a puddle. And as if she was singing in some sort of beautiful polyphony, Cecilia, abandoned her show tune and started singing “Down the Ohio” in chorus with her sister.

The younger children do not actually know all of the words to any of the songs they like to sing and often interpolate their own lyrics. Benedict has a voice that can be described as what I can only surmise a donkey would sound like if a donkey could sing. And something about being outdoors seemed to not only encourage but provoke my children to sing as loud as physically possible. At one point, during this damp and cacophonous encounter my musically trained mind was going berserk and I wanted to tell them all to stop. It was then that I realized that they were all happy, there was a slight breeze, we were almost home, and everything was wonderful. So, I said to myself “Lauren, shut up and let them sing.”

I have never met someone who has encountered my singing children who has ever responded with anything other than a smile. I have seen curmudgeonly men and women alike develop a twinkle in their eye the minute Cecilia starts singing the wrong words to a well-known song or the instant Benedict lets out a donkey-like bellow. Please do not misunderstand, singing is an art and worth learning to do well, that is for certain. There are intricate details and techniques that are learned which enable a singer to perform to their greatest ability and consequently invite the listener to be moved to altered state, hopefully one that encourages us all to contemplate things that are far bigger than ourselves. But music that resonates with us, the singing that moves our spirit, comes from our bodies and our souls regardless of any one person’s ability. This uninhibited release is a God-given gift that can be done by anyone in any way. We need to sing. And we may all be surprised by how positively and powerfully it can and does affect us and the world if we let it. 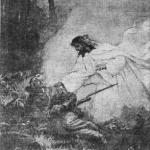 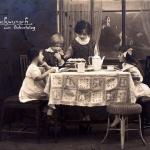 May 27, 2021 Not Just Cake: Why Music Matters
Browse Our Archives
get the latest updates from
Eidos
and the Patheos
Evangelical
Channel
POPULAR AT PATHEOS Evangelical
1