To be a parent is to let go: to teach another human being to think, choose, and live for herself.

The rewards are very great as all my, now adult, children teach me. We do not always agree, but I always learn. This is good and beautiful. Both my daughters have taught me, tomorrow one of these wonder women has a birthday. Here is an example of what she taught me when she was so very small, Red Sox jersey on, and insistent I listen.

She asked me what I thought of the book, a Victorian era novel, that I had bought her as a present at a conference.

I picked it up for the beauty of the binding, but I did not know a book by the cover. She looked not-so-happy, but never had a problem articulating problems. She gave the book the full measure of her young mind and if I could repeat what she said about Elsie Dinsmore then I would be done with proving her wisdom. She hated the racism, the stupid view of women, the crabbed version of Christianity, and the writing.

She hated the book. I read it and was sorry to have bought it and said so. She kept reading the series for a bit, if memory serves me, to see what would happen. A spirited human often likes to study a disaster to see what happened, what went so wrong, and how to avoid the horror.

I knew, just then, how vital was teaching children to think for themselves. Why? I had introduced a bad book. She assumed the text had my imprimatur, but refused the ideas nonetheless and questioned me about the book. She was saved by her own critical thinking skills and knowledge. This was adult thinking.

There was much to learn from this bad book and a wise daughter learned:

She saw that old books might escape the evils of today, but repeat ancient sins. Evil ages badly. A classic is a book that gets the big ideas right, not one that portrays a false history, misuses religion, and is full of racism. Consider: why would anyone put rat poison in a child friendly package? That our forefathers did but once is bad enough, but that modern Christians do it now is diabolism combined with stupidity.

The worst book for a Christian is the Satanic book that quotes the Bible in favor of diabolism. Elsie Dinsmore is full of religious talk used in the service of Pharisaical rules, twisting theology, hatred, and racism. A girl is better off reading JK Rowling and admiring Hermione Granger, despite her faults, than Martha Finely and aping the monstrous character Elsie Dinsmore. Dinsmore, like Satan, quotes the Bible. Granger acts more like a Biblical hero, even if she does not parade religion.

A wise girl saw this quickly, though the truth was disturbing, she followed the truth. I read the book and saw she was right quickly, apologized, but the kid was all right. Wisdom had led her to a good place. Virtue continued for years over the course of her life. When turned Godward, fortified by God’s grace, growth and greatness is sure.

Sometimes I did not listen to her advice about people, only to discover I should have done so. She was as right about them as Elsie Dinsmore. The role of a parent is to decrease as a wise child increases: to be David to Solomon.

I am proud to know her and happy to listen. When we dialogue, the world is good. 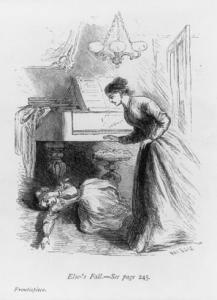 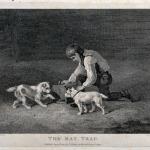 June 6, 2021 Two Dead Rats in a Trap
Browse Our Archives
get the latest from
Eidos
Sign up for our newsletter
POPULAR AT PATHEOS Evangelical
1

Why Churches Go Woke: They Deny...
The Chorus In The Chaos
Books by This Author John Mark Reynolds