” Silent night, Holy night…all is calm, all is bright “, every christmas we sing this carol. Usually candles in hand, flickering flames dancing on the walls like some angelic visitation. And we reflect on the birth of the God-child. Having two daughters and being present for both of their entrances into this world, I recall vividly it was anything but silent. Despite the pre-natal and birthing classes when the moment came, calmness and a plan were abandoned…for what ever works. Me standing at my wife’s side, with her in the utter agony of the moment, dabbing a face cloth on her forehead calmly saying, ” pah…pah…pah, slow your breathing down.” My wife cranking her head, face contorted yelled, ” Will you shut the f#$^ up.”

Revolutions are birthed in pain…always. Even if you want to believe Mary was the picture of smiling calmness, I really believe if you were in the stable and you put your ear close enough to the ground you could hear the birth pains of humanity. It was a world of domination and oppression…politically oppressive, economically exploitative, religiously legitimated…and controlled by armed force. It was world groaning in desperate expectation and hope…for change to be birthed.

It was a world that had begun to write it’s own narrative to try and capture the imagination of humanity…a story of the divine son of god, ” Caesar ” ruler of the empire promising prosperity and security for its citizens. 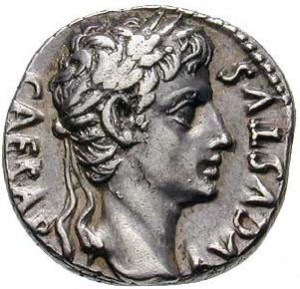 Even the Roman currency, Caesar’s coin said he was ” DIVI F, that is DIVI FILIUS or Son of God. The narrative could be summed up in one of the carved inscriptions from Halicarnassus, modern Bodrum in south west Turkey:

The eternal and immortal nature of everything has bestowed upon mankind the greatest good with extraordinary benefactions by bringing Caesar Augustus in our blessed time the father of his own country, divine Rome, and ancestral Zeus, Savior of the common race of men, whose providence has been not only fulfilled but actually exceeded the prayers for all. For the land and sea are at Peace and the cities flourish with good order, concord and prosperity.

This was the message that was being spun, but, it was not the reality. It was the reality of the 99% verses the 1%. There was no middle class in this culture it was the wealthy and the poor. Rome seized land, agriculture became commercialized. It was peasants working for a days wages if they could find jobs. Peasants lived at a subsistence level in most cases barely surviving. Drought, a bad crop year only intensified the suffering. Government became increasingly corrupt protecting wealth and commodity. Taxes became even more burden on the peasant class. Religion was also infected with corruption. The high Priest and temple authorities became the mediators of imperial rule, responsible for collecting and paying tribute to Rome and for maintaining domestic and moral order. Jerusalem and the temple, the sacred center of the Jewish world, had become the center of native collaboration with empires domination.

You can not read that and not imagine hearing the pain, the anguish and suffering of humanity…pregnant in desperation for hope to come. Out of this profound pain God is birthed into humanity. This God-child is birthed into ” our ” hands.

We can’t look around the world around us, and wonder if we missed this birth altogether. We were there, watched it all happen but completely missed what it was all about.

This year, pause, look around…all the way around. Listen, really listen…not tuning in one ear, and tuning out the other. 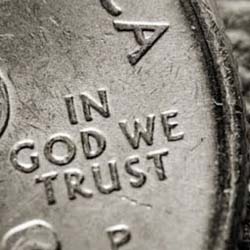 This time of year there is a lot of money changing hands, out of wallets, across counters and into tills. Consumerism is almost at a feverish frenzy. And much like Caesar’s coin, we too have our own with its inscription, ” IN GOD WE TRUST.” I wonder, unknowingly have we created our own god. The god of our empire. The god who likes what, and whom we like.

We see poverty on the increase in our towns, and cities around the globe. The poverty in the the so called third world could quite easily approach extinction for many. The environment, we have raped and plundered stealing her resources leaving her naked and exposed while we walk away. The pillars of the economy lay crumbled because of greed, and yet we convince ourselves reinvesting capitalism is the cure. Government has become increasingly corrupt. The vote which once brought change has become a game to amuse the public, while corporate wealth is the new democracy. We have religion implicit, and co-opted with politics, with no prophetic imagination the prevailing narrative of the day is unchallenged. But through it all the empire of the day spins it’s message of prosperity and security…peace and goodwill. The american dream is not dead…just in need of some first aid.

But in the midst, if you really listen humanity groans…for something to be birthed beyond anything we can imagine. Revolutions are birthed in the midst of pain. Jesus birth is about the birth of a revolution. It is about a revolution to re-write the narative that would finally recaputure the imagination of humanity. It’s about a revolution that would turn the empires of the world upside down in which the Kingdom would be come real. It’s where swords became plowshares, we’d love our enemies, forgiveness would be endless, the first would be last, love would conquer all, boundaries and lines would be erased, we’d sacrifice our lives for one another…life would be abundant for all.

This year…let’s pray for the birth of a revolution

December 20, 2011
In which I am done fighting for a seat at the table
Next Post

December 20, 2011 Parenting the Divine: A Christmas Meditation
Recent Comments
0 | Leave a Comment
"When people who are not physically handicapped use the handicap stall, I just say to ..."
Aelxa Hill When the Golden Rule Fails
"I’m glad there is a end if we are suffering for a uncure thing I’m ..."
disqus_fyy1HxoUzu Thank God for DEATH: Could Anything ..."
"Church is boring. It should lose its tax breaks."
Ivan T. Errible The Embodiment of God (Fast of ..."
"This was an awesome post! It really gave me a new perspective on relationships and ..."
Bianca Williams Loss and Redemption in Relationships
Browse Our Archives
Related posts from Emergent Village